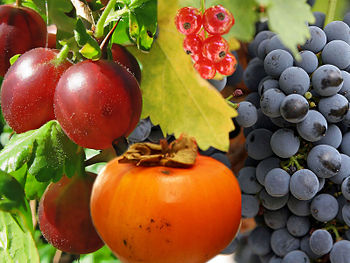 In botany, a berry is a fleshy or pulpy indehiscent fruit in which the entire ovary wall ripens into a relatively soft pericarp, the seeds are embedded in the common flesh of the ovary, and typically there is more than one seed. Examples of botanical berries include the tomato, grape, avocado, and persimmon.

In common parlance and in cuisine, the term berry refers generically to any small, edible fruit with multiple seeds. Aggregate fruits, such as the blackberry, the raspberry, and the boysenberry, which develop from several ovaries, are berries in this sense, but not in the botanical sense. On the other hand, in common parlance, the tomato typically is not thought of as a berry.

Whether in a botanical or culinary sense, berries offer important ecological values and benefits to human beings. Ecologically, the flowers of berry plants can be a major nectar source for pollinating insects, and the fruit is consumed by various animals. For human beings, beyond satisfying physical needs of the human body, berries also add to the wonder of nature with their rich tastes and varied colors. Human creativity not only has found innumerable uses for berries, but has also developed new varieties with desirable qualities.

A "true berry," like a gooseberry or grape, has a relatively thin covering and an edible, soft pericarp with very fleshy interiors. A "hesperidium" (plural hesperidia) is a modified berry with a tough, separable, leathery rind (rather than a thin covering like the true berries), and a fleshy interior composed of separate sections filled with fluid-filled vesicles. Citrus fruits are all hesperidiums. Several types of common "berries", none of which is a berry by botanical definition:
The blueberry is a false berry, raspberries and blackberries are aggregate fruit, and strawberries are accessory fruit.

In botany, a fruit is the ripened ovary—together with seeds—of a flowering plant.

After pollination, the ovary will grow into the fruit, while the enclosed ovule(s) become the seed(s). In many species, the fruit incorporates the ripened ovary and surrounding tissues.

More specifically, after an ovule is fertilized in a process known as pollination, the ovary begins to expand. The petals of the flower fall off and the ovule develops into a seed. The ovary eventually comes to form, along with other parts of the flower in many cases, a structure surrounding the seed or seeds that is the fruit. Fruit development continues until the seeds have matured. With some multiseeded fruits, the extent of development of the flesh of the fruit is proportional to the number of fertilized ovules.

The wall of the fruit, which is developed from the ovary wall of the flower, is called the pericarp. The pericarp is often differentiated into two or three distinct layers called the exocarp (outer layer—also called epicarp), mesocarp (middle layer), and endocarp (inner layer).

Fruits are so varied in form and development that it is difficult to devise a classification scheme that includes all known fruits. It also will be seen that many common terms for seeds and fruit are incorrectly applied, a fact that complicates understanding of the terminology. Seeds are ripened ovules; fruits are the ripened ovularies or carpels that contain the seeds.

In botany, the true berry is the most common type of simple fleshy fruit; a fruit in which the entire ovary wall ripens into an edible, relatively soft pericarp. The flowers of these plants have a superior ovary and they have one or more carpels within a thin covering and very fleshy interiors. The seeds are embedded in the common flesh of the ovary. True berries have a pulpy endocarp and a thin skin or exocarp. Examples of botanical berries include the tomato, grape, litchi, loquat, plantain, avocado, persimmon, eggplant, guava, uchuva (ground cherry), and chile pepper.

Berries are indehiscent fruits, meaning they do not need to open to discharge seeds. 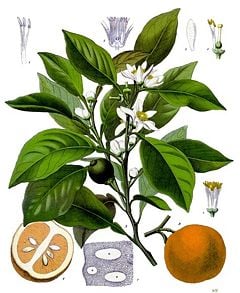 Fruits of all members of the genus Citrus are considered berries because they have many seeds, are fleshy and soft, and derive from a single ovary. However, their distinctive fruit is a hesperidium in that it is a specialized berry with the internal fleshy parts divided into segments (typically 10 to 16) and surrounded by a separable rind (Katz and Weaver 2003). Examples include the orange, kumquat, and lemon.

The fruit of cucumbers, cantaloupes, watermelon, squash, pumpkin, and their relatives are modified berries called pepoes. Pepoes have a hard or leathery rind, numerous flattened seeds, and fleshy pulp.

A plant that bears berries is referred to as bacciferous.

Examples of fruits that are not berries in a botanical sense would include the drupe and the pome. A pome, such as the apple, is an accessory fruit composed of five or more carpels in which the exocarp forms an inconspicuous layer, the mesocarp is usually fleshy, and the endocarp forms a leathery case around the seed. Outside of the endocarp is the most edible part of this fruit. A drupe is a fruit in which an outer fleshy part (exocarp, or skin; and mesocarp, or flesh) surrounds a shell (the pit or stone) of hardened endocarp with a seed inside. These fruits develop from a single carpel, and mostly from flowers with superior ovaries. The definitive characteristic of a drupe is that the hard, lignified stone (or pit) is derived from the ovary wall of the flower. Some flowering plants that produce drupes are coffee, mango, olive, apricot, cherry, nectarine, peach, and plum. Raspberries are not berries at all in the botanical sense, since the "berry" is composed of many connected druplets, which are individual sections of fruit, each with its own seed (Herbst 2001). This berry surrounds a central core, which separates from the berry when picked.

Berry in common parlance and cuisine

In common parlance, a berry is any small, edible, fleshy or pulpy fruit with a number of seeds.

These fruits tend to be sweet, juicy, and of a bright color contrasting with their background to make them more attractive to animals that eat them, thus dispersing the seeds of the plant.

As berry colors derive from natural pigments synthesized by the plant, a special field of health research (Gross 2007a) has focused on the anti-disease properties of pigmented polyphenols, such as flavonoids, anthocyanins, and tannins, among other phytochemicals localized mainly in berry peels (skins) and seeds. Related to the biological properties of berry pigments is antioxidant ability for which berries are notable due to their relatively high oxygen radical absorbance capacity ("ORAC") among plant foods (Beecher et al. 2004). Together with good nutrient content, ORAC distinguishes several berries within a new category of functional foods called "superfruits," a rapidly growing multi-billion dollar industry which began in 2005 (Gross 2007b). 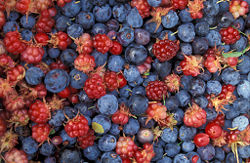