Kiwifruit and chinese gooseberry are common names for a deciduous, woody fruiting vine or climbing shrub, Actinidia deliciosa, characterized by alternative long-petioled leaves, white to buff-yellow flowers, and an oblong fruit with fuzzy, russet-brown skin and a fleshy interior that is typically green with a white central core and black-brown seeds. Both common names, kiwifruit and Chinese gooseberry, also are used for the edible, commercially important fruit. The plant is native to southern China, but widely cultivated in New Zealand, Italy, Chile, the United States, and elsewhere.

The fruit has a soft texture and an unusual exterior. It also offers a unique culinary experience with its generally bright-green flesh and sweet-tart flavor that is unlike any other fruit. The fruit, which provides for the species individual function of reproduction, also provides a larger ecological role, providing food for various animals. 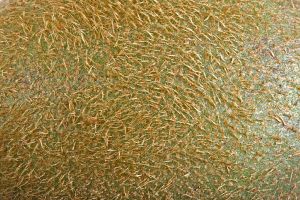 Actinidia deliciosa is a vigorous, woody, twining vine or climbing shrub reaching nine meters (29.5 feet) (Morton 1987). It is a member of the Actinidiaceae family of flowering plants. It is native to southern China. Other species of Actinidia are also found in China and range east to Japan and north into southeastern Siberia. Actinidia deliciosa grows naturally at altitudes between 600 and 2,000 meters.

The leaves of the kiwifruit are alternate, long-petioled, deciduous, oval to nearly circular, cordate at the base, and 7.5 to 12.5 centimeters (3-5 inches) long. Young leaves are coated with red hairs; mature leaves are dark-green and hairless on the upper surface, downy-white with prominent, light-colored veins beneath (Morton 1987).

The kiwifruit flowers are fragrant, dioecious or bisexual, borne singly or in 3's in the leaf axils. They are 5- to 6-petaled, white at first, changing to buff-yellow, 2.5 to 5 centimeters (1-2 inches) broad, and both sexes have central tufts of many stamens, though those of the female flowers lack viable pollen (Morton 1987). The flowers also lack nectar.

Kiwifruit flowers in November. Male and female flowers appear on different plants (dioecious) and both sexes have to be planted in close proximity for fruit set. Bees are normally used by commercial orchards, although the more labou intensive hand pollination is sometimes employed. Male flowers are gathered and processed to extract their pollen. This is then sprayed back on to the female flowers. 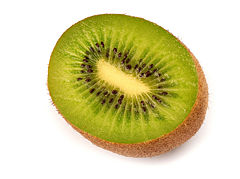 Kiwifruit (or kiwi) and Chinese gooseberry also is the name of the edible berry of Actinidia deliciosa. It can result from a cultivar group and hybrids between this and other species in the genus Actinidia.

Originally known as the Chinese gooseberry (Green 2002), the fruit was renamed for export marketing reasons in the 1950s; briefly to melonette, and then by New Zealand exporters to kiwifruit. This latter name comes from the kiwi, a flightless bird and New Zealand's national symbol, and also a colloquial name for the New Zealand people. To avoid confusion with the bird and the people, the fruit is always called "kiwifruit" in New Zealand and Australia. However, in other countries it is sometimes abbreviated to "kiwi."

The most common cultivars of kiwifruit are oval, about the size of a large hen's egg, 5 to 8 centimeters (2-3 inches) long and 4.5 to 5.5 centimeters (1¾–2 inches) in diameter. It has a fibrous, dull, brown-green or russet-brown skin, with the skin densely covered with short, stiff brown hairs.

The flesh is firm until fully ripen; it is glistening, juicy, and luscious. The color of the flesh is bright-green—or sometimes yellow, brownish, or off-white—except for the white, succulent center from which radiate many fine, pale lines. The flesh has rows of small, black, edible seeds.

The flavor is subacid to quite acid. The flavor has been called "elusive," sometimes compared to a pineapple or strawberry, but ultimately a "sweet-tart flavor unlike any other fruit" (Herbst 2001).

There are two botanical varieties:

Almost all kiwifruit in commerce belong to a few cultivars of Actinidia deliciosa: 'Hayward', 'Chico', and 'Saanichton 12'. The fruit of these cultivars are practically indistinguishable from each other and match the description of a standard kiwifruit. In China, the four main cultivars of this species are 'Zhong Hua' (Chinese gooseberry), 'Jing Li' (northern pear gooseberry), 'Ruan Zao' (soft date gooseberry), and 'Mao Hua' (may be tight- or loose-haired). In New Zealand, the main cultivars are 'Hayward', 'Abbott', 'Allison', 'Bruno', 'Monty' (Montgomery), and 'Greensill'. 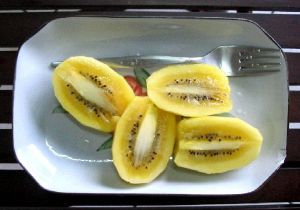 Gold kiwifruit or 'Hinabelle', with yellow flesh and a sweeter, less acidic flavor resembling a tropical fruit salad, is a new Cultivar Group produced by the New Zealand Crown Research Institute, HortResearch and marketed worldwide in increasing volumes. Some wild vines in India have yellow fruit but are small and not commercially viable. Seeds from these plants were imported to New Zealand in 1987 and the company took 11 years to develop the new fruit through cross-pollination and grafting with green kiwi vines. Gold kiwifruit have a smooth, bronze skin, a pointed cap at one end and distinctive golden yellow flesh with a less tart and more tropical flavor than green kiwifruit. It has a higher market price than green kiwifruit. It is less hairy than the green cultivars, so can be eaten whole after rubbing off the thin, fluffy coat.

Native to China, specimens of the plant were collected in 1847 by the agent for the Royal Horticultural Society, London (Morton 1987).

Cultivation spread from China in the early twentieth century, when seeds were introduced to New Zealand by Mary Isabel Fraser, the principal of Wanganui Girls' College, who had been visiting mission schools in Yichang, China (Zespri). The seeds were planted in 1906 by a Wanganui nurseryman, Alexander Allison, with the vines first fruiting in 1910.

People who tasted the fruit then thought it had a gooseberry flavor and began to call it the Chinese gooseberry, but being from the Actinidiaceae family it is not related to the Grossulariaceae (gooseberry) family.

The familiar cultivar Actinidia deliciosa 'Hayward' was developed by Hayward Wright in Avondale, New Zealand around 1924. This is the most widely grown cultivar in the world. Chinese gooseberry was initially grown in domestic gardens, but commercial planting began in the 1940s.

In 1959, Turners and Growers named it, kiwifruit, after New Zealand's national bird, the kiwi— brown and furry. 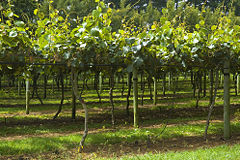 Italy is now the leading producer of kiwifruit in the world, followed by New Zealand, Chile, France, Greece, Japan, Iran, and the United States. Kiwifruit also is produced in its birthplace China, where it traditionally was collected from the wild. However, until recently, China was not a major producing country, although it has been expanding greatly (Huang and Ferguson 2003). In China, it is grown mainly in the mountainous area upstream of the Yangtze River. It is also grown in other areas of China, including Sichuan (Huang and Ferguson 2001).

Kiwifruit can be grown in most temperate climates with adequate summer heat. Kiwifruit is commercially grown on sturdy support structures, as it can produce several metric tons per hectare, more than the rather weak vines can support. These are generally equipped with a watering system for irrigation and frost protection in the spring.

Kiwifruit vines require vigorous pruning, similar to that of grapevines. Fruit is borne on one-year-old and older canes, but production declines as each cane ages. Canes should be pruned off and replaced after their third year.

Kiwifruit plants are normally dioecious, meaning that individual plants are male or female. Only female plants bear fruit, and only when pollenized by a male plant. One male pollenizer is required for each three to eight female vines. An exception is the cultivar 'Issai', a hybrid (Actinidia arguta x polygama) from Japan, which produces perfect flowers and can self-pollinate; unfortunately it lacks vigor, is less hardy than most A. arguta forms, and is not a large producer.

Kiwifruit is notoriously difficult to pollinate because the flowers are not very attractive to bees. Some producers blow collected pollen over the female flowers. But generally the most successful approach is saturation pollination, where the bee populations are made so large (by placing hives in the orchards) that bees are forced to use this flower because of intense competition for all flowers within flight distance.

Culinary use and nutrition

Kiwifruit normally is used fresh, and can be eaten as it, or sliced and used in desserts, salads, or as a garnish (Herbst 2001). Sliced kiwifruit has long been regularly used as a garnish atop whipped cream in New Zealand's national dessert, the pavlova. Kiwifruit also is used for jam, juice, wine, and other products. Canned and frozen fruit also is used.

Raw kiwifruit is rich in the protein-dissolving enzyme actinidin (in the same family of thiol proteases as papain), which is commercially useful as a meat tenderizer but can be an allergen for some individuals. Specifically, people allergic to latex, papayas, or pineapples are likely to be allergic to kiwifruit also. Reactions include sweating, tingling, and sore mouth; swelling of the lips, tongue and face; rash; vomiting and abdominal pain; and, in the most severe cases, breathing difficulties, wheezing, and collapse. The most common symptoms are unpleasant itching and soreness of the mouth, with the most common severe symptom being wheezing. Severe symptoms are most likely to occur in young children.

This enzyme makes raw kiwifruit unsuitable for use in desserts containing milk or any other dairy products that are not going to be served within hours, because it soon begins to digest milk proteins. This applies to gelatin-based desserts as well, as the actinidin will dissolve the collagen proteins in gelatin very quickly, either liquifying the dessert, or preventing it from solidifying. However, the U.S. Department of Agriculture suggests that cooking the fruit for a few minutes before adding it to the gelatin will overcome this effect (USDA 1994).

Kiwifruit is a rich source of vitamin C, 1.5 times the DRI scale in the United States. Its potassium content by weight is slightly less than that of a banana. It also contains vitamins A and E. The skin is a good source of flavonoid antioxidants. Usually a medium size kiwifruit contains about 46 calories (NutritionData), 0.3 grams fats, 1 gram proteins, 11 grams carbohydrates, 75 milligrams vitamins, and 2.6 grams of dietary fiber. The kiwifruit seed oil contains on average 62 percent alpha-linolenic acid, an omega-3 fatty acid (FRCNF).

Kiwifruit is often reported to have mild laxative effects, possibly because of the high level of dietary fiber (Rush et al. 2002). Kiwifruit also serves as a natural blood thinner. A recent study found that the consumption of two to three kiwifruit daily for 28 days significantly thinned the blood, thus reducing the risk of clots, and it also lowered potentially blockage-causing fat in the blood (BNET 2004).