This article is about the bird genus. For the fruit, see Kiwifruit.

Kiwi (plural: Kiwis or kiwi) is the common name for any of the flightless birds endemic to New Zealand comprising the genus Apteryx, characterized by rudimentary wings, short and stout legs, dark plumage, poor vision, and a long, slender, pointed bill with nostrils uniquely opening at the tip rather than base. About the size of a domestic chicken, kiwis are by far the smallest living ratites—a group of flightless birds that also includes ostriches, emus, rheas, and elephant birds. There are about five species of kiwis.

The kiwi is so associated with New Zealand that it is a national symbol of the nation, with the term used to refer to any inhabitant of New Zealand, as well as being a slang term for the New Zealand dollar. Kiwi also is the common name of a fruit (kiwi fruit or kiwifruit; also known as the Chinese gooseberry). Applied to the people of New Zealand, the term is capitalized, with the plural as Kiwis. Applied to the bird, the term usually is uncapitalized, with the plural either the anglicized "kiwis" or, consistent with the Māori language, appearing as "kiwi" without an "s" (CNZ 2008). (Kiwis will be utilized as the plural in this article, following the standard of the 2002 Oxford American College Dictionary.)

Kiwis are shy birds that nest in deep burrows and are usually nocturnal. Kiwis are notable for laying eggs that are very large in relation to their body size. A kiwi egg may equal 15 to 20 percent of the body mass of a female kiwi. In some species, the males incubate the eggs, while in others both the males and females incubate.

The unique adaptations of kiwis, such as their large eggs, unique form, or using their nostrils at the end of their long beak to detect prey before they ever see it, have added to the wonder of nature and helped kiwis to become internationally well-known. However, all species of kiwis are endangered, with the causes generally related to humans: Loss of habitat and imported predators such as dogs and stoats (ermines).

As with other ratites, kiwis are characterized by a flat, raft-like sternum (breastbone) lacking the keel for attachment of wing muscles that is typical of most flying birds and some other flightless birds. Kiwis are by far the smallest extant ratites. Other ratites include the African ostrich, the Australian emu, the Australian and Oceania cassowary, and two species of South American rheas. Recently extinct forms include elephant birds and moas.

Kiwis comprise the genus Apteryx, which is the only genus in the family Apterygidae. They are chicken-sized birds, ranging in size from about 25 centimeters (10 inches) tall and 1.2 kilograms (2.7 pounds) in the little spotted kiwi (Apteryx owenii) to about 45 centimeters (17.7 inches) high and 3.3 kilograms (7.3 pounds) in the great spotted kiwi (Apteryx haastii). Their rudimentary wings are hidden within the soft, hairlike, two-branched feathers; their tail also is very short. They have clawed, four-toed feet on short, sturdy legs, and a long, slender, pointed and downcurved bill that may be 15 centimeters (6 inches) long. Unlike other birds, the nostrils end on the tip of this beak rather than at the base. (Because a bird's beak is generally measured from the tip to the nostril, this (technically) gives the kiwi the shortest beak of any bird.) While birds generally have hollow bones to save weight and make flight practicable, the flightless kiwi have marrow, in the style of mammals. 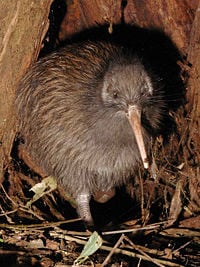 Kiwis have a highly developed sense of smell, which they use to find small insects and grubs in the soil. Kiwis have poor vision.

The word kiwi {kē'wē; kee-wee) comes from the Māori language, a Malayo-Polynesian language of the Austronesian family, spoken by about 100,000 of New Zealand's inhabitants. The name may originate from the cry that the kiwi makes, which sounds like "kiwi, kiwi." The word first appeared in the English language in 1835, in describing this bird (Metcalf 1999).

The scientific name Apteryx means wingless. The name was given by George Shaw, an English botanist and zoologist, based on a kiwi skin brought to him by Captain Andrew Barclay aboard the ship Providence, who was reported to have been given it by a sealer in Sydney Harbor around 1811. George Shaw drew sketches of the way he imagined a live bird to look, which appeared as plates 1057 and 1058 in volume 24 of The Naturalist's Miscellany in 1813.

It was long presumed that the kiwi's closest relatives were the other New Zealand ratites, the now-extinct moas. However, recent DNA studies indicate that the ostrich is more closely related to the moa and the kiwi's closest relatives are the emu and the cassowaries (Cooper et al. 2001). This theory suggests that the kiwi's ancestors arrived in New Zealand from elsewhere in Australasia well after the moa. According to British scientists, the kiwi may be an ancient import from Australia. Researchers of Oxford University have found DNA evidence connected to Australia's emu and the ostrich of Africa. Upon examining DNA from New Zealand's native moa, they believe that the kiwi is more closely related to its Australian cousins (ABC 2001). 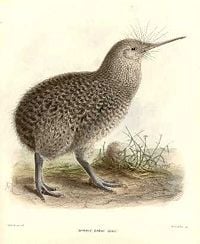 Prior to the arrival of humans in the thirteenth century or earlier, New Zealand's only endemic extant mammals were three species of bat, and the ecological niches that in other parts of the world were filled by creatures as diverse as horses, wolves, and mice were taken up by birds (and, to a lesser extent, reptiles).

Kiwis are shy and usually nocturnal. Their mostly nocturnal habits may be a result of habitat intrusion by predators, including humans: In areas of New Zealand where introduced predators have been removed, such as sanctuaries, kiwi are often seen in daylight.

Kiwis eat small invertebrates, seeds, grubs, and many varieties of worms. They also may eat fruit, small crayfish, eels, and amphibians. Because their nostrils are located at the end of their long beaks, kiwi can locate insects and worms underground without actually seeing or feeling them.

Once bonded, a male and female kiwi tend to live their whole lives together as a monogamous couple. During the mating season, June to March, the pair call to each other at night, and meet in the nesting burrow every three days. These relationships may last for up to 20 years (BNZ 2008a). Kiwi eggs can weigh up to one quarter the weight of the female. Usually only one egg is laid per season. Although the kiwi is about the size of a domestic chicken, it is able to lay eggs that are about six times the size of a chicken's egg (BNZ 2008b). With no constraints on weight from flight requirements, some brown kiwi females carry and lay a single 450 gram egg. 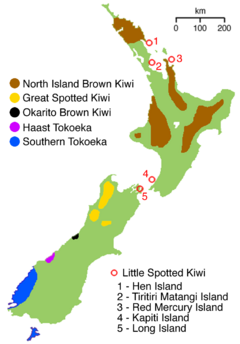 The distribution of each species of kiwi.

Currently, there are five accepted species (one of which has four sub-species), plus one to be formally described.

Analysis of mitochondrial DNA, ecology, behavior, morphology, geographic distribution, and parasites of the North Island brown kiwi has led scientists to propose that the brown kiwi may be three distinct species (Burbidge et al. 2003). These are the North Island brown kiwi; the Okarito brown kiwi (rowi), whose distribution is restricted to a single site on the West Coast of the South Island of New Zealand; and the Southern tokoeka, distributed in the in lowland forest to the north of Franz Josef glacier in the South Island and on Stewart Island. 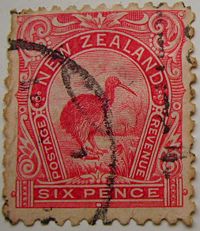