Lemon (Citrus × limon) is a hybrid of the plant genus Citrus, as well as the common name for the popular edible fruit of this small tree or spreading bush. The lemon plant is characterized by thorny branches and white flowers with purple edges, while the acidic, juicy fruit is oval (egg-shaped), has an aromatic rind that is typically yellow when ripe (green as immature or under certain environmental conditions), and has a prominent nipple or bulge on the blossom end.

The Citrus genus is a group of flowering plants in the family Rutaceae (orange family) that originated in tropical and subtropical southeast Asia and that have a distinctive berry with the internal parts divided into segments. Other members of the Citrus genus include oranges, limes, citrons, grapefruit, pomelos (pummelo, pommelo), and mandarins (tangerines). Most members of the Citrus genus arose as hybrids, and the hybridized types of citrus, such as lemon (Citrus limon), may or may not be recognized as species according to different taxonomies (Krueger 2003).

While the fruit of the lemon serves the plant's individual purpose of reproduction, it also serves a wider value for humans in terms of culinary and non-culinary uses. Among the culinary uses are the use of the juice in drinks, garnishes for drinks, condiments, salad dressings, and squeezed over cooked meat or vegetables. As an astringent citrus, lemons generally are not eaten on their own. Among non-culinary purposes are the use of lemon oil in perfumes, cosmetics, and furniture polish and the tree for aesthetic purposes.

Lemon juice is about five percent acid, which gives lemons a sour taste and a pH of 2 to 3. This makes lemon juice a cheap, readily available acid for use in educational science experiments. 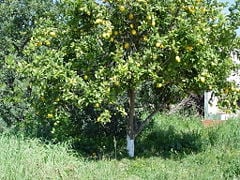 A lemon tree can grow up to ten meters (33 feet), but they are usually smaller. The branches are thorny and form an open crown. The leaves are green, shiny, and elliptical-acuminate. Flowers are white on the outside with a violet streaked interior and have a strong fragrance. On a lemon tree, flowers and ripe fruits can be found at the same time (Lanzara and Pizetti 1978).

Lemon fruit are oval and can range from about the size of a large egg to a small grapefruit (Herbst 2001). When ripe, they have a bright yellow nose, a layer of pith underneath and a paler yellow segmented interior. Small seeds commonly known as 'floopies' are found within the fruit; the skin can be thick or thin. Notably, the color of citrus fruits only develops in climates with a (diurnal) cool winter. In tropical regions with no winter, citrus fruits remain green until maturity. Commercially, lemons are commonly picked while green and ripened in cool, dark rooms.

For cooler winter areas, lemon and lime trees should not be grown, since they are more sensitive to winter cold than other citrus fruits. The largest producers are Italy and the United States. In the United States, lemons are commercially grown in cooler-summer/moderate-winter coastal Southern California, because sweetness is neither attained nor expected in retail lemon fruit. Other top producing nations include Spain, Greece, and Argentina.

Krueger (2003) claims that the generally accepted view is that there were three primordial Citrus species—Citrus medica (citrons), Citrus maxima (pumelos), and Citrus reticulata (mandarins)—and that all other types of citrus rose from single or sequential hybridization events between these species or their offspring. Based on whether the hybridized types of citrus are recognized as species, anywhere from three to 170 species are recognized, with the commonly used system of Swingle recognizing 16 species (Krueger 2003). 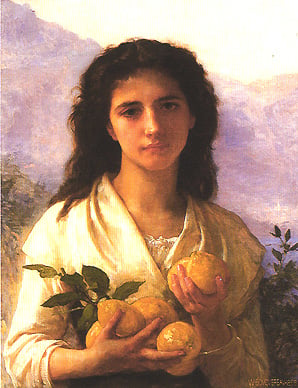 The lemon is a cultivated hybrid deriving from wild species such as the citron and mandarin. When and where this first occurred is not known. The citron—apparently the fruit described in Pliny's Natural History (XII, vii.15) as the malum medicum, the "medicinal fruit"—seems to have been the first citrus fruit known in the Mediterranean world.

Depictions of citrus trees appear in Roman mosaics of North Africa, but the first unequivocal description of the lemon is found in the early tenth-century Arabic treatise on farming by Qustus al-Rumi. The use and cultivation of the lemon, by the Cantonese (Southern Barbarians) is noted in the early twelfth century. At the end of the twelfth century, Ibn Jami', personal physician to the Muslim leader Saladin, wrote a treatise on the lemon, after which it is mentioned with greater frequency in literature of the Mediterranean. However, it is believed that the first lemons were originally cultivated in the hot, semi-arid Deccan Plateau in Central India.

The origin of the name "lemon" is through Persian (لیمو Limu [pronounced with long e and short u]), akin to the Sanskrit nimbuka. They were cultivated in Genoa, Italy in the mid-fiteenth century, and appeared in the Azores in 1494. Research has identified lemons in the ruins of Pompeii (Russell and Cutler 2004). Lemons were once used by the British Royal Navy to combat scurvy, as they provided a large amount of Vitamin C.

The lemon fruit is used primarily for its juice, although the pulp and peel (rind) are also used, primarily in cooking and baking.

Astringent citrus, such as lemons and limes, are generally not eaten on their own. Both lemons and limes are regularly served as lemonade or limeade by diluting the juices of these fruits and adding sugar. Lemons and limes are also used as garnishes for drinks such as iced tea or a soft drink, with a slice either inside or on the rim of the glass. Only lemons, however, are used in the Italian liqueur Limoncello. A wedge of lemon is also often used to add flavor to water. Marmalade, a condiment derived from cooked orange and lemon, can be especially bitter.

Lemons and limes are used as an ingredient in a variety of dishes and their juice can commonly be found in salad dressings and squeezed over cooked meat or vegetables. Lemon juice is typically squeezed onto fish dishes—the acidic juice neutralizes the taste of amines in fish by converting them to nonvolatile ammonium salts. In addition, lemon juice is widely used, along with other ingredients, when marinating meat before cooking—the acid provided by the juice partially hydrolyzes the tough collagen fibers in the meat (tenderizing the meat).

Some people like to eat lemons as fruit; however, water should be consumed afterward to wash the citric acid and sugar from the teeth, which might otherwise promote tooth decay and many other dental diseases.

Lemons also make a good short-term preservative, commonly used on sliced apples. This keeps the fruit crisp and white for about a day, preventing the unappetizing browning effect of oxidization. This helps to prolong the usage of the fruit.

Lemon juice is used to relieve the pain of bee stings, though the juice does not have any antibiotic effects.

Lemons warmed to room temperature before squeezing (in a microwave or by leaving on a counter) increases the amount of juice that can be extracted. Storing lemons at room temperature for long periods makes them more vulnerable to mold.

Lemons and other citrus fruits contain amounts of different chemicals that are thought to have some health benefits. They contain a terpene called D-limonene, which gives their characteristic lemon smell and taste. Lemons also contain significant amounts of citric acid—this is why they have a low pH and a sour taste.

Lemons are very high in Vitamin C (ascorbic acid), which is essential to human health. A 100 milliliter amount of lemon juice contains approximately 50 milligrams of vitamin C (55 percent of the recommended daily value) and five grams of citric acid. Because of its high vitamin C content, lemon has been touted in alternative medicine as a tonic for the digestive system, immune system, and skin. However, vitamin C is quickly lost once the lemon is squeezed, with a 20 percent loss after only eight hours at room temperature or 24 hours in a refrigerator (Herbst 2001).

Some sources state that lemons contain unique flavonoid compounds that have antioxidant and anti-cancer properties (GMF 2007). These may be able to deter cell growth in cancers. Limonins found in lemons could also be anti-carcinogens.

There is a belief in Ayurvedic medicine that a cup of hot water with lemon juice in it tonifies and purifies the liver.

Historically, lemons have been utilized in a number of non-culinary purposes, including as an epilepsy remedy, an invisible ink, and a bleaching agent (Herbst 2001).

Lemons can be processed to extract oils and essences. Lemon oil or the essential oil is used in perfumes, cosmetics, and furniture polish. In a Japanese study into the effects of aromatherapy, lemon essential oil in vapor form has been found to reduce stress in mice (Komiya et al. 2006).

The peel of the lemon is used to make commercial pectin.

A common school experiment involving lemons is to attach electrodes and use them as a battery to power a light. The electricity generated may also be used to power a motor to move the lemons (on wheels) like a car or truck. These experiments also work with other fruit like apples and with potatoes.

Several other plants have a similar taste to lemons. In recent times, the Australian bush food Lemon myrtle has become a popular alternative to lemons. The crushed and dried leaves and edible essential oils have a strong, sweet lemon taste, but contain no citric acid. Lemon myrtle is popular in foods that curdle with lemon juice, such as cheesecake and ice cream.