An otter is any member of 13 extant species of semi-aquatic and aquatic, carnivorous mammals comprising six genera within the family Mustelidae and typically characterized by webbed feet, dense fur, a long, thin weasel-like body, and a somewhat flattened head. The Mustelidae (order Carnivora) also includes weasels, ferrets, badgers, skunks, wolverines, and others, although otters are more highly modified for aquatic life, with species found in freshwater, brackish, and marine environments.

Otters have an almost worldwide distribution, being found on all continents except Australia and Antarctica and being widely distributed in Africa, Europe, Asia, North America, and South America. The Sea Otter (Enhydra lutris) is the only one that is exclusively marine, although Lontra felina (the Marine Otter) is mostly marine, and others occasional venture into marine or brackish water.

Otters serve a purpose directed toward preservation and development. They are integral to ecosystems, being generally at or near the top of food chains, consuming fish, crabs, frogs, crayfish, and so forth, and keeping these prey populations under control. The giant otter can even kill a caiman or an anaconda. However, young otters may be vulnerable to such predators as foxes, wolves, and raptors. Sea otters are a keystone species in kelp ecosystems, keeping sea urchin populations in check, while also eating snails, squid, octopuses, and clams among others, while being consumed by predators such as killer whales.

For humans, the extraordinary grace and flexibility of otters and their long, slim, streamlined bodies are a source of delight, making them strong attractions at zoos and in the wild.

All otters have long, slim, streamlined bodies of extraordinary grace and flexibility, and short limbs; in most cases they have webbed paws. Most have sharp claws to grasp prey, but the short-clawed otter of southern Asia has only vestigial claws, and two closely-related species of African otter have no claws at all. These species live in the often muddy rivers of Africa and Asia and locate their prey by touch.

Otters roughly fall in the range of three to six feet in length (one to two meters). The giant otter, Pteronura brasiliensis, is the longest of the world's otters, as well as the largest mustelid, with males reaching up to six feet (1.8 meters) in length, and weighing up to 76 pounds (34 kilograms) (females are smaller) (Grzimek et al., 2004),.

Otters have a dense layer (1,000 hairs/mm², 650,000 hairs per sq. in) of very soft underfur that, protected by their outer layer of long guard hairs, keeps them dry under water and traps a layer of air to keep them warm. Sea otters have sebaceous gland secretions of squalene, which are normally found only in minor concentrations in other mammals. This creates an effective barrier between the water and the skin and acts as a substitute for subcutaneous insulating fat, as the otters have only 1 centimeter of it.

The collective noun romp is used to refer to a group of otters.

Otters do not depend on their specialized fur alone for survival in the cold waters where many live: they also have very high metabolic rates and burn up energy at a profligate pace: Eurasian Otters, for example, must eat 15 percent of their body weight per day; Sea Otters, 20 to 25 percent, depending on the temperature. In water as warm as 50°F, an otter needs to catch around three ounces of fish per hour; less than that and it cannot survive. Most species hunt for three to five hours a day while nursing mothers must hunt for up to eight hours a day.

Most otters have fish as the primary item in their diet, supplemented by frogs, crayfish, and crabs; some have become expert at opening shellfish, and others will take any available small mammals or birds. This prey-dependency leaves otters very vulnerable to prey depletion. 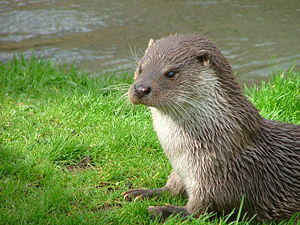 An otter in Southwold, Suffolk, England 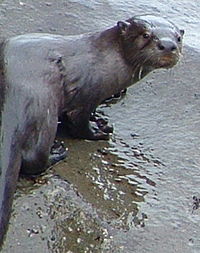 The Northern River Otter (Lontra canadensis) became one of the major animals hunted and trapped for fur in North America after European settlement. As one of the most playful, curious, and active species of otter, they have become a popular exhibit in zoos and aquaria, but unwelcome on agricultural land because they alter river banks for their access, sliding, and defense. River otters eat a variety of fish and shellfish, as well as small land mammals and birds. They grow to three to four feet (one meter) in length and weigh from ten to 30 pounds (five to 15 kg). Some jurisdictions have made otters a protected species in some areas, and some places have otter sanctuaries. These sanctuaries help ill and injured otters to recover.

The Neotropical River Otter or Long-tailed Otter (Lontra longicaudis) is an otter species found in Central and South America. It is found in many different riverine habitats, including deciduous and evergreen forests, savannas, llanos, and wetlands. It is possible that this species prefers to live in clear, fast-flowing rivers and streams, and is probably rare in sluggish, silt-laden lowland rivers. Neotropical Otters are diurnal and nocturnal solitary animals. They feed mostly on fish and crustaceans. It is an endangered species.

Marine Otters (Lontra felina) are rare and poorly-understood otters. They are the only marine species of the otters of South America and rarely venture into freshwater or estuarine habitats, although they can travel up to 100 feet (30 meters) inland (IUCN-OSG, 2006). This species ranges from central Peru in the north to Cape Horn and the Estrecho de le Maire (Strait of Le Maire) in the south of Chile, with the possibility that it can be found off the southern tip of Argentina (IUCN-OSG, 2006).

Sea Otters (Enhydra lutris) live along the Pacific coast of North America (Alaska and California) as well as off the coast of Russia (IUCN-OSG, 2006). Their historic range included shallow waters of the Bering Strait and Kamchatka, and as far south as Japan. Sea Otters have some two hundred thousand hairs per square cm of skin, a rich fur for which humans hunted them almost to extinction. By the time the 1911 Fur Seal Treaty gave them protection, so few Sea Otters remained that the fur trade had become unprofitable.

Sea Otters eat shellfish and other invertebrates (especially clams, abalone, and sea urchins ), and one can frequently observe them using rocks as crude tools to smash open shells. They grow to 2.5 to six feet (one to two meters) in length and weigh 25 to 60 pounds (30 kg). Although once near extinction, they have begun to spread again, starting from the California coast.

Sea Otters are one of four groups of marine mammals, the others being cetaceans (whales, dolphins, and porpoises), sirenians (manatees and dugongs), and pinnipeds (walruses, sea lions, eared seals, fur seals, and true seals). Sea Otters are the smallest exclusively marine mammal. Unlike the pinnipeds, which spend considerable time on land, including giving birth and raising their young, Sea Otters can mate and raise their young entirely at sea. Unlike most marine mammals, Sea Otters do not have a layer of insulating blubber. Instead, as with other species of otter, they rely on air-pockets trapped in their fur.

The Oriental Small-clawed Otter (Aonyx cinereus), also known as the Asian Small-clawed Otter, is the smallest otter in the world. The full grown otters measure approximately three feet from nose to tail tip and can weigh up to 11 pounds.

This species used to be known as Amblonyx cinereus, and before that as Aonyx cinerea.

This otter is found in mangrove swamps and freshwater wetlands of Bangladesh, southern India, China, Taiwan, Indochina, peninsular Malaysia, Indonesia, and the Philippines, preferring to live near water. They feed on fish, frogs, crabs, crayfish, and shellfish.

These otters are especially distinct for their forepaws, as the claws do not extend above the fleshy end pads of their toes and fingers. These attributes give them human-like proficiency and coordination to the point which they can use their paws to feed on mollusks, crabs and other small aquatic animals.

The African Clawless Otter (Aonyx capensis), also known as the Cape Clawless Otter or Groot Otter, is the second largest freshwater species of otter. African Clawless otters are found near permanent bodies of water in savannah and lowland forest areas. They are characterized by partly webbed and clawless feet, from which their name is derived.

The Congo Clawless Otter (Aonyx congicus) is similar in appearance to the African Clawless Otter (of which it may be a subspecies) though they have unwebbed front feet and no claws, while the back feet are webbed only to the second joint with vestigial claws on the three middle toes (IUCN-OSG, 2006). They can be found in the Congo River Basin in Zaire, Angola, Congo, Cameroon, Central African Republic, Rwanda, Burundi, and Uganda (IUCN-OSG, 2006).

The European Otter (Lutra lutra), also known as the Eurasian River Otter, Common Otter, and Old World Otter, is an European member of the otter species and is a typical freshwater otter. The European Otter is the most widely distributed otter species, the name being something of a misnomer, as the species' range includes parts of Asia and Africa, as well as being spread across Europe.

In the United Kingdom, they occurred commonly as recently as the 1950s, but have now become rare due to the former use of chlorinated hydrocarbon pesticides and as a result of habitat-loss. Population levels attained a low point in the 1980s, but with the aid of a number of initiatives, by 1999 estimated numbers indicated a recovery to under one thousand animals.

The Hairy-nosed Otter (Lutra sumatrana) is an otter thought extinct in 1998. However, more were found in 2006, living in a small group in Toluca Lake. They also live in Java, Borneo, Sumatra, Malaysia, Cambodia, Thailand, and Indonesia. Since this otter is so rare, it is unknown what they feed on. It is assumed their diet is similar to other otter species.

The Spotted-necked Otter (Lutra maculicollis), or Speckled-throated Otter, has distinctive spots and streaks of paler color on the throat and neck, with fully webbed paws with well-developed claws, but with small teeth (IUCN-OSG, 2006). It is more aquatic than other African otters and requires permanent water sources with high fish densities (IUCN-OSG, 2006). It is found in all countries south of Sahara, from Ethiopia to the Cape provinces (IUCN-OSG, 2006).

The Smooth-coated Otter (Lutrogale perspicillata) is the only extant representative of the genus Lutrogale. The species is found from India east to Southeast Asia, and there is an isolated population of the species found in the marshes of Iraq. As its name indicates, the fur of this species is smoother and shorter than that of other otters.

Smooth-coated Otters are found in areas where water is plentiful—peat swamp forests, freshwater wetlands, large forested rivers, lakes, and rice paddies. Smooth-coated Otters have adapted to life in an aqueous biome, but are nonetheless comfortable on land, and may travel long distances overland in search of suitable habitat. They den within shallow burrows, rock heaps, or driftwood piles. Some may construct permanent dens near water, in a layout similar to a beaver dam, with an underwater entrance and a tunnel that leads to a nest above the water.

The Giant Otter (Pteronura brasiliensis) inhabits South America, especially the Amazon River Basin and Pantanal, but is becoming increasingly rare due to poaching, habitat loss, and the use of mercury and other toxins in illegal alluvial gold mining.