Olympic National Park, on Washington state's Olympic Peninsula, was originally created as the Olympic National Monument in 1909. It attained National Park status in 1938 under President Franklin D. Roosevelt. Though one park, it is divided into three basic regions: the Pacific coastline, the Olympic Mountains, and the temperate rainforest. Eleven major river systems drain the Olympic Mountains, creating some of the best habitat for anadromous fish species in the country. Diversity—mountain, glacier, forest, rainforest, ocean, waterfall, wilderness, hotsprings, salmon runs—gives the park its distinction.

In 1976, Olympic National Park became an International Biosphere Reserve, and in 1981 it was designated a World Heritage Site. In 1988, almost all of the Olympic Peninsula was designated as the Olympic Wilderness, further enhancing the protection of the region.

Olympic National Park on Washington state's Olympic Peninsula is a land of contrast and variety. There are Pacific Ocean beaches, rainforest valleys, lowland forest, glacier-capped mountain peaks and a great variety of plant and animal life.

Diversity—mountain, glacier, forest, rainforest, ocean, waterfall, wilderness, hotsprings, salmon runs—gives the park its distinction. Though one park, it is divided into three major areas; the glaciered mountains and highcountry of the interior; the lush rain forest of the west-facing valleys; and the rugged wilderness coastline. Vast areas of the park remain wilderness. There is not a single road that runs through the entire park, which has helped to preserve its natural form.

The coastal portion of the park is a rugged, sandy beach along with a strip of adjacent forest. It is 73 miles (117km) long but just a few miles wide, with native communities at the mouths two of rivers. The Hoh River is home to the Hoh people, while at the town of La Push at the mouth of the Quileute River live the Quileute.

The beach has unbroken stretches of wilderness ranging from ten to 20 miles (16 km to 32 km). While some beaches are primarily sand, others are covered with heavy rock and very large boulders. Bushy overgrowth, slippery footing, tides and misty rainforest weather all hinder foot travel.

The coastal strip is more readily accessible than the interior of the Olympics; due to the difficult terrain, very few backpackers venture beyond casual day-hiking distances. 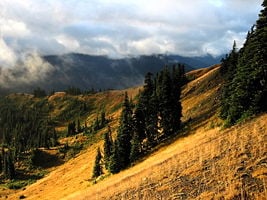 The most popular section of the strip is the nine mile (14 km) Ozette Loop. The Park Service runs a registration and reservation program to control usage levels of this area. From the trailhead at Lake Ozette, a three mile (4.8 km) leg of the trail is a boardwalk-enhanced path through near primal coastal cedar swamp.

Arriving at the ocean, it is a three-mile walk supplemented by headland trails for high tides. This area has traditionally been favored by the Makah people from Neah Bay. The third three-mile leg is enabled by a boardwalk which has enhanced the loop's popularity.

There are thick groves of trees adjacent to the sand, which results in chunks of timber from fallen trees on the beach. The mostly unaltered Hoh River, toward the south end of the park, discharges large amounts of naturally eroded timber and other drift, which moves north, enriching the beaches. The removal of driftwood, logs, dead-heads, tops and root-wads from streams and beaches was a major domestication measure across North America. Even today driftwood deposits form a commanding presence, biologically as well as visually, giving a taste of the original condition of the beach viewable to some extent in early photos. Drift-material often comes from a considerable distance, the Columbia River formerly contributed huge amounts to the Northwest Pacific coasts.

The smaller coastal portion of the park is separated from the larger, inland portion. President Franklin D. Roosevelt originally had supported connecting the two areas via a continuous strip of park land. 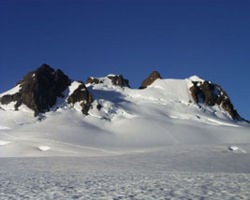 A view of the summit of Mount Olympus from the Blue Glacier. 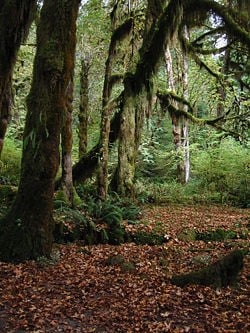 Within the center of Olympic National Park rise the Olympic Mountains whose sides and ridgelines are topped with massive, ancient glaciers. The mountains themselves are products of accretionary wedge uplifting related to the Juan De Fuca Plate subduction zone. The geologic composition is a curious mélange of basaltic and oceanic sedimentary rock.

The western half of the range is dominated by the peak of Mount Olympus, which rises to 7,965 feet (2,428 meters). Mount Olympus receives a large amount of snow, and consequently has the greatest glaciation of any non-volcanic peak in the contiguous United States outside of the North Cascades. It has several glaciers, the largest of which is the Hoh glacier, nearly five kilometers in length. Looking to the East, the range becomes much drier due to the rain shadow of the western mountains. Here, there are numerous high peaks and craggy ridges. The tallest summit of this area is Mount Deception, at 7,788 feet (2,374 m).

The western side of the park sports a temperate rain forest, including the Hoh Rain Forest and Quinault Rain Forest, the wettest area in the continental United States (only the island of Kauai in the state of Hawaii gets more rain). Because this is a temperate rainforest, as opposed to a tropical one such as the Amazon Rainforest in South America, it isn't dominated by tropical ferns, but rather contains dense timber, including spruce and fir, and mosses that coat the bark of these trees and even drip down from their branches in green, moist tendrils.

Because the park sits on an isolated peninsula, with a high mountain range dividing it from the land to the south, it developed many unique plant and animal species (like the Olympic Marmot) that are not found anywhere else in the world. The southwestern coastline of the Olympic Peninsula is also the northernmost non-glaciated region on the Pacific coast of North America, with the result that—aided by the distance from peaks to the coast at the Last Glacial Maximum being about twice what it is today—it served as a refuge from which plants colonized glaciated regions to the north.

The park also provides habitat for many species (like the Roosevelt elk) that are native only to the Pacific Northwest coast. Because of this importance, scientists have declared it to be a Biological Reserve, and study its unique species to better understand the process of plant and animal evolution. 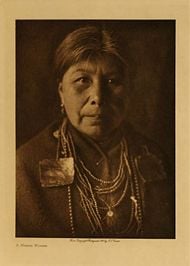 Prior to the influx of European settlers, Olympic's human population consisted of Native Americans, whose use of the peninsula was thought to have consisted mainly of fishing and hunting. However, recent reviews of the record, coupled with systematic archaeological surveys of the mountains (Olympic and other Northwest ranges) are pointing to much more extensive tribal use of especially the subalpine meadows than seemed formerly to be the case.

Most, if not all, Pacific Northwest indigenous cultures were more or less severely adversely affected by European diseases (often decimated) and other factors, well before ethnographers, business operations and settlers arrived in the region, so what they saw and recorded was a much-reduced native culture-base. Large numbers of cultural sites are now identified in the Olympic mountains, and important artifacts have been found. 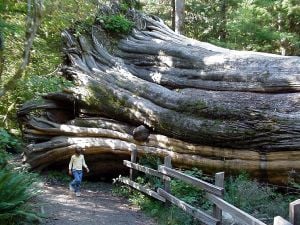 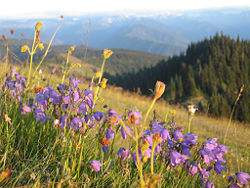 When settlers began to appear, extractive industry in the Pacific Northwest was on the rise, particularly in regards to the harvesting of timber, which began heavily in the late 1800s and early 1900s. Public dissent against logging began to take hold in the 1920s, when people got their first glimpses of the clear-cut hillsides. This period saw an explosion of people's interest in the outdoors; with the growing use of the automobile, people took to touring previously remote places such as the Olympic Peninsula.

The formal record of a proposal for a new national park on the Olympic Peninsula begins with the expeditions of well-known figures Lieutenant Joseph O'Neil and Judge James Wickersham, during the 1890s. These notables met in the Olympic wilderness while exploring, and subsequently combined their political efforts to have the area placed within some protected status. Following unsuccessful efforts in the Washington State Legislature in the early 1900s, President Theodore Roosevelt created Mount Olympus National Monument in 1909, primarily to protect the subalpine calving grounds and summer range of the Roosevelt elk herds native to the Olympics.

Public desire for preservation of some of the area grew until President Roosevelt declared the area a national park in 1938. Even after it was declared a park, though, illegal logging continued in the park, and political battles continue to this day over the incredibly valuable timber contained within its boundaries. Logging continues on the Olympic Peninsula, but not within the park. 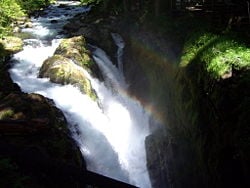 There are several roads in the park, but none penetrate far into the interior. The park features a network of hiking trails, although the size and remoteness means that it will usually take more than a weekend to get to the high country in the interior. The sights of the rain forest, with plants run riot and dozens of hues of green, are well worth the possibility of rain sometime during the trip, although months of July, August and September frequently have long dry spells.

A nearly unique feature of Olympic National Park is the opportunity for backpacking along the beach. The length of the coastline in the park is sufficient for multi-day trips, with the entire day spent walking along the beach. Although idyllic compared to toiling up a mountainside (Seven Lakes Basin is a notable example), one must be aware of the tide; at the narrowest parts of the beaches, high tide washes up to the cliffs behind, blocking passage. There are also several promontories that must be struggled over, using a combination of muddy steep trail and fixed ropes.

During winter, the popular viewpoint known as Hurricane Ridge offers alpine and Nordic skiing opportunities. The Hurricane Ridge Winter Sports Club operates Hurricane Ridge Ski and Snowboard Area, a not-for-profit alpine ski area which offers ski lessons, rentals, and inexpensive lift tickets. The small alpine area is serviced by two rope tows and one poma lift. Backcountry skiers often make their way down to the main Hurricane Ridge Road in order to hitchhike their way back to the top. Rafting is available on both the Elwha and Hoh Rivers.

Retrieved from https://www.newworldencyclopedia.org/p/index.php?title=Olympic_National_Park&oldid=1091926
Categories:
Hidden category:
This page was last edited on 19 December 2022, at 02:28.
Content is available under Creative Commons Attribution/Share-Alike License; additional terms may apply. See Terms of Use for details.