Mustelids play important ecological and commercial roles. Ecologically, mustelids help to control prey populations. The sea otters, for example, are keystone predators that keep prey populations in check. For humans, in addition to control pest species, mustelids historically have been very important as a source of fur and remain so today. Minks, sables, fishers, wolverines, otters, and weasels are all harvested for their pelts. More rarely, mustelids have been hunted for food, and ferrets are popular as pets. In Asia, some otters are tamed and used to catch fish. The unique form, playful behaviors, and agility of some mustelids make them attractions in zoos or in the wild. 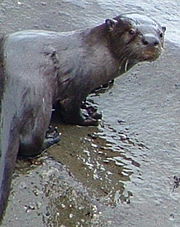 Members of Carnivora are placed into two main sub-orders, Feliformia (cat-like) and Caniformia (dog-like). Mustelide is placed in the Caniformia sub-group along with the families Canidae (dogs, wolves, and foxes), Ursidae (bears), Procyonidae (raccoons, coatis), and Mephitidae (skunks), as well as the pinnipeds (seals, sea lions, and walruses).

The Mustelidae were difficult to classify until genetic evidence started to become available. The increasing availability of such evidence may well result in some members of the family being moved to their own separate families, as has already happened with the skunks, previously considered to be members of the mustelid family. About 55 extant species in 24 genera are currently recognized.

Mustelids vary greatly in size, form, and behavior. The least weasel (Mustela nivalis) is not much larger than a mouse and is the smallest carnivore, being from 11 to 26 centimeters (4-10 inches) in length (Larivière 2004). The giant otter, which can weigh up to 34 kilograms (76 pounds) and be from 100 to 150 centimeters (40-60 inches) is the largest mustelid (Larivière 2004). The wolverine can crush bones as thick as the femur of a moose to get at the marrow, and has been seen attempting to drive bears from kills. The sea otter uses rocks to break open shellfish to eat. The marten is largely arboreal, while the badger digs extensive networks of tunnels, called setts. Some mustelids have been domesticated. The ferret and the tayra are kept as pets, or as working animals for hunting or vermin control. Others have been important in the fur trade. The mink is often raised for its fur.

Within a large range of variation, the mustelids exhibit some common characteristics. They all exhibit the loss of the second upper molar and the loss of the carnassial notch on the fourth upper premolar (Wund 2005). Mustelids are typically small to medium in size, with short legs, small heads, large necks, and short round ears, and either have a long tubular shape or a stock built (Larivière 2004). They have five fingers and toes with non-retractile claws; otters have fully webbed hind feet (Larivière 2004). Most mustelids are solitary, nocturnal animals, and are active year-round (King 1984).

While not all mustelids share an identical dentition, they all possess teeth adapted for eating flesh, including the presence of shearing carnassials. Although there is variation between species, the most common dental formula is (King 1984):

The mongoose and the meerkat bear a striking resemblance to many mustelids but belong to a distinctly different suborder—the Feliformia. Because the mongoose and the mustelids occupy similar ecological niches, it is held that convergent evolution led to some similarity in form and behavior.

Sable, a type of marten

Mustelids are found in terrestrial and aquatic habitats (both freshwater and marine) and on all continents except Antarctica and Australia; they are not found naturally on Madagascar or oceanic islands, but are introduced to New Zealand (Wund 2005). They are found in a wide variety of terrestrial habitats, including prairies, steppes, treeless tundra, and forests. Some members of the family are aquatic to varying degrees, ranging from the semi-aquatic mink, the river otters, and the highly aquatic sea otter.

Mustelids are either carnivorous (weasels, martens, otters) or omnivorous and also consume some plant matter (badgers). Some, such as weasels and ferrets, can hunt in burrows of small rodents or burrows of rabbits and hares.

Most mustelid reproduction involves embryonic diapause. The embryo does not immediately implant in the uterus, but remains dormant for a period of time. No development takes place as long as the embryo remains unattached to the uterine lining. As a result, the normal gestation period is extended, sometimes up to a year. This allows the young to be born under more favorable environmental conditions. Reproduction has a large energy cost and it is to a female's benefit to have available food and mild weather. The young are more likely to survive if birth occurs after previous offspring have been weaned.

The sea otter is one of the few non-primate mammals known to use a tool while foraging. It uses "anvil" stones to crack open the shellfish that form a significant part of its diet. It is a "keystone species," keeping its prey populations in balance so some do not outcompete the others and they do not destroy the kelp in which they live.

The black-footed ferret is entirely dependent on another keystone species, the prairie dog. A family of four ferrets will eat 250 prairie dogs in a year. The ferrets require a prairie dog colony of 500 acres (2 km²) to maintain a stable population to support their predation. Detail from Leonardo da Vinci's "Lady with the ermine" (actually a ferret).

Several mustelids, including the mink, the sable (a type of marten), and the ermine (stoat), boast exquisite, warm, and valuable furs and have been accordingly hunted since prehistoric times. Since the early middle-ages, the trade in furs was of great economic importance for northern and eastern European nations with large native populations of fur-bearing mustelids, and was a major economic impetus behind Russian expansion into Siberia and French and English expansion in North America. In recent centuries, fur farming, notably of mink, has also become widespread and provides the majority of the fur brought to market.

One species, the sea mink (Neovison macrodon) of New England and Canada, was driven to extinction by fur trappers around the same time that the passenger pigeon was declining in the late nineteenth century. Its appearance and habits are almost unknown today because no complete specimens can be found and no systematic contemporary studies were conducted.

The sea otter, which has the densest fur of any animal, narrowly escaped the fate of the sea mink. The discovery of large populations in the North Pacific was the major economic driving force behind Russian expansion into Kamchatka, the Aleutian islands, and Alaska, as well as a cause for conflict with Japan and foreign hunters in the Kuril Islands. Together with widespread hunting in California and British Columbia, the species was brought to the brink of extinction until an international moratorium came into effect in 1911.

Today, some mustelids are threatened for other reasons. Sea otters are vulnerable to oil spills and the indirect effects of overfishing; the black-footed ferret, a relative of the European polecat, suffers from the loss of American prairie; and wolverine populations are slowly declining because of habitat destruction and persecution.

One mustelid, the domestic ferret (Mustela putorius furo), has been domesticated since ancient times, originally for hunting rabbits and pest control. In recent years its popularity as a household pet has increased.

The taxonomy of Mustelidae is unsettled and has been long been debated. Various subfamilies have been recognized in the past, with between four and seven commonly recognized (Wund 2005). Recently, the five following subfamilies have been accepted: Lutrinae, Melinae, Mellivorinae, Taxideinae, and Mustelinae). However, recent research suggests only two subfamilies should be recognized, Lutrinae (otters) and Mustelinae (all the rest) (Wilson and Reeder 2005), as follows: