Ermine is the common name for a small, northern weasel, Mustela erminea, characterized by a short, black-tipped tail, a long body with short legs, and fur that is dark brown in summer and turns white during snowy, winter conditions. This member of the mammal family Mustelidae is the most widely distributed weasel, being found throughout the northern temperate, subarctic, and Arctic regions of Europe, Asia, and North America. While known as ermine or short-tailed weasel in North America, Mustela erminea is commonly known as stoat in Europe.

The white fur also is known as "ermine," and even in regions where the animal is known as a "stoat," the animal with this winter coat may be referred to as ermine, or as being "in ermine."

The ermine is important both ecologically and commercially. Ecologically, it is important in food chains, being a significant predator especially of small rodents, while falling prey to the fox, wolf, and badger, among other animals. Commercially, the ermine has been important for the fur trade and in particularly its valuable white winter coat. This highly prized white fur has adorned royal robes in Europe and used in art as a symbol of purity or virginity.

The ermine also is reflective of the unintended consequences of some ecological practices. In an unsuccessful attempt to control the rabbit population, the ermine was introduced into New Zealand. However, this proved disastrous as the ermine found alternative source of food easier to catch (local birds and their eggs). Not only did this introduction leave the rabbit problem unsolved, but also this has hurt populations of native species, including kiwis and hole-nesting birds. Ermines also were brought to Terschelling Island to control water voles (Arvicola terrestris), which are now extinct on that island. 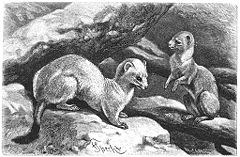 The ermine is a member of the family Mustelidae, which also includes other weasels, mink, otters, ferret, badgers, polecats, the wolverine, martens, the tayra, and the fisher. Classified in the Martes genus, the ermine is considered a member of the "true weasels," along with the minks, ferrets, and other mammals with the common name of weasel, typically characterized by a long, slim body, long neck, short legs, rounded ears, and medium to long tails. While these are the true weasels, at times the term weasels is used more generally for all members of the Mustelidae family (the weasel family).

The ermine is built long and thin, with a tubular-shaped body. It also has short legs and small ears. Ermines typically have a length of 15 to 25 centimeters (6-10 inches) and with a short 3 to 10 centimeter (2-4 inch) tail, and weigh from 135 to 350 grams (0.2 to 0.8 pounds) (Grzimek et al. 2004). Males are much larger than females. In most areas, the ermine coexists with the weasel (Mustela nivalis, also known as the least weasel), the smallest member of order Carnivora; where the least weasel is absent, the ermine is smaller (~70 g).

The ermine's coat is a rich medium brown with an off-white belly. In winter, the coat is thicker and in regions that experience an inch or more of snow for at least forty days of the year (such as in Armenia (Walker 1990) the color changes to clean white. In all seasons, the ermine has a black tip to its tail. The black tip probably serves as a decoy to predators, which would include almost any carnivore large enough to eat an ermine (e.g. wolves, foxes, wolverines, and some birds of prey).

This kind of coat is very similar to the coat of the long-tailed weasel (Mustela frenata), a related animal of about the same size, which also molts into white in the northern part of its range. It is easy to confuse these kinds of weasels. The North American name for the ermine, the "short-tailed weasel," arose because its tail length distinguishes it from the long-tailed weasel. In general, the ermine has a more northern distribution. Both species can be distinguished from the least weasel (Mustela nivalis), which also turns white in winter, because the weasel lacks a black tip on its tail.

Despite inhabiting northern latitudes, the ermine is built long and thin, leading to an increased surface area-to-volume ratio and increased dissipation of heat from its body. The short legs, small ears, and, in winter, thick fur helps to compensate for this shape, as does the ermine's fast metabolism. The advantage of this shape is that the ermine is one of the few species able to follow burrowing animals into their own homes.

The ermine moves in a sinuous manner when pursuing its prey extremely quick over the ground considering its small size, and is also a strong swimmer that is able to colonize offshore islands.

The ermine is native to the area between the 40th parallel (north) and the beginning of the Arctic Circle, which encompasses most of northern Eurasia and North America. The distribution includes Ireland, Europe, parts of Asia, northern India, Japan, Mongolia, Algeria, Greenland, and across most of North America. Among all of the weasels, the ermine has the greatest distribution (Grzimek et al. 2004).

Ermines have been introduced to New Zealand and Australia. Ermines can swim up to 1.5 kilometers across seawater and have already reached several New Zealand offshore islands unaided. Maud Island which is 900 meters off of the northern tip of the South Island of New Zealand, has been colonized multiple times in the past 20 years. 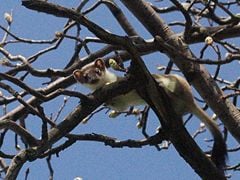 Ermine in a tree

Ermine are largely nocturnal or crepuscular but will sometimes be active during the day. They are good climbers and will use trees to escape predators, rest, and search for food (Grzimek et al. 2004). An ermine can descend a tree's trunk headfirst, like a squirrel.

The ermine is largely solitary. The ermine is territorial and intolerant of others in its range, especially others of the same sex. Within its range, it typically uses several dens, often taken from prey species. It usually travels alone, except when it is mating or is a mother with older offspring.

The ermine is a carnivore. It eats mostly small rodents, and in particular mice, voles, and lemmings (Grzimek et al. 2004). It will also eat squirrels, rabbits, insects, birds and their eggs, and sometimes fish, reptiles, amphibians, and invertebrates. The ermine is capable of killing animals much larger than itself.

When the ermine is able to obtain more meat than it can eat, it will engage in "surplus killing" and often stores the extra food for later. When this is the case, it will often kill by breaking the prey's neck without marking the body, presumably so its cache does not spoil easily.

There are several recorded instances of ermines "transfixing" rabbits by exhibiting a tumbling routine akin to a dance. The rabbit appears fooled by this activity and fails to recognize the danger as the ermine approaches within striking distance. Once close enough, the rabbit falls easy prey to the ermine.

Like other mustelids, the ermine typically dispatches its prey by biting into the base of the skull to get at the centers of the brain responsible for such important biological functions as breathing. Sometimes it will also make preliminary bites to other areas of the body. In most areas in which ermines and least weasels co-exist, the weasel generally takes smaller prey and the ermine slightly larger prey. The larger male ermines generally take larger prey than females.

Commonly, the ermine falls prey to animals such as the wolf, fox, cat, or badger. The ermine breeds once a year, producing several young kits (or kittens) per litter, and its mating system is promiscuous. Copulation occurs during the mating season with multiple partners and is often forced by the male, who does not help raise the offspring. Sometimes mating occurs when the female is so young she has not even left the den.

In spite of being such a small animal, the ermine's gestation is among the longest reported for mammals because of the adaptation of delayed implantation, or embryonic diapause, in which a fertilized egg is not implanted in the uterus until months later. This implantation may be delayed nine to ten months, with the total gestation about 280 days. Thus, the animal's "real" gestation is much shorter. This is presumably an adaptation to the highly seasonal environment in which the ermine lives.

Communication (and also location of prey) occurs largely by scent, since the ermine has a sensitive olfactory system. As a result, much of this communication is missed by human observers. However, ermines are believed to identify females in estrus by scent, and also the sex, health, and age of prey. Some kinds of rodents such as voles have adaptations that allow them to shut down reproduction if they smell the odor of mustelids. (Reproduction makes females slower and easier to catch.)

The ermine's visual resolution is lower than that of humans and color vision is poor, although night vision is superior. Like most other non-primate mammals they have dichromatic color vision. (They can distinguish long from short wavelengths of light, but cannot make distinctions of hue within those bands.)

Tactile information is conferred by the vibrissae, or whiskers.

When alarmed, a ermine can release a powerful,disgusting, musky smell from glands near its anus, as characteristic of mustelids. 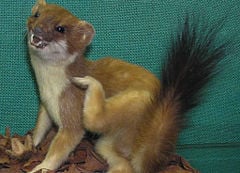 Stuffed ermine in Bristol City Museum, Bristol, England. The ermine is distinguished from the least weasel by its larger size and black tip to the tail. 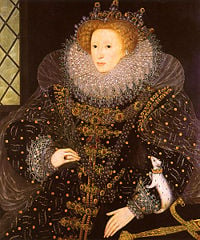 Elizabeth I of England, "the Virgin Queen," painted with an ermine on her arm. In this painting the ermine has, unnaturally, black spots over its entire body.

The furs of ermines are commercially valuable and in particular the white coat, known itself as ermine, which has been prized by the fur trade for centuries. In Europe, these white furs were a symbol of royalty; the ceremonial robes of members of the UK House of Lords are trimmed with ermine, though artificial fur is now used. The ermine was also considered a symbol of purity in Europe. In the Renaissance era, legend had it that an ermine would die before allowing its pure white coat to be besmirched. When it was being chased by hunters, it would supposedly turn around and give itself up to the hunters rather than risk soiling itself. Henry Peacham's Emblem 75, which depicts an ermine being pursued by a hunter and two hounds, is entitled "Cui candor morte redemptus" or "Purity bought with his own death." Peacham goes on to preach that men and women should follow the example of the ermine and keep their minds and consciences as pure as the legendary ermine keeps its fur. The ermine in the depiction is seen as spotted, a common mistake as garments would be made of many ermine skins with the many black tipped tails (Gregg).

In some Nordic countries the ermine is invoked as a symbol of curiosity and timely action. In some areas of Japan, because of its adorable appearance and somewhat elusive nature it is still considered a symbol of good luck.

Retrieved from https://www.newworldencyclopedia.org/p/index.php?title=Ermine&oldid=974401
Categories:
Hidden category:
This page was last edited on 3 October 2013, at 14:20.
Content is available under Creative Commons Attribution/Share-Alike License; additional terms may apply. See Terms of Use for details.