Vole is the common name for small, mice-like rodents comprising several genera in the Arvicolinae subfamily, a taxon that also includes lemmings and, in some classifications, muskrats. Voles are characterized by a stout body, small and rounded ears, short legs, relatively large eyes, and a tail that is shorter than the head and body. Voles are also referred to as meadow mice or field mice in North America, and they are similar in appearance to mice; however, the more narrow, scientifically restricted definition of a mouse (true mouse) generally refers to those placed in the genus Mus in a different subfamily.

There are over 150 known species of voles.

Voles provide an important roles in the ecosystem. With their high reproductive rate, they provide a food source for many species, including reptiles (snakes), birds (owls, hawks, falcons), and other mammals (coyotes, foxes, weasels, martens, raccoons, lynx). Highly herbivorous, they can consume large amounts of plant matter, providing a role in seed dispersal. Those that consume seedlings play a role in forest regeneration, while those that burrow in the ground help in aerating the soil. While some can have negative consequences for humans through carrying diseases or damaging crops, those that eat insect larva help in the control of pests, some are hunted locally for fur, and overall they add to the wonder of life.

As rodents (order Rodentia), voles are characterized by dentition specialized for gnawing, with a single pair of upper incisors and single pair of lower incisors that grow continuously throughout their life and must be worn down by gnawing. The incisors have enamel on the outside and exposed dentine on the inside, so they self-sharpen during gnawing. Rodents lack canines and first premolars, which creates a space between their incisors and their grinding teeth (molars).

Within Rodentia, the voles belong to the superfamily Muroidea a vary large taxon that also includes hamsters, gerbils, true mice and rats, and many other relatives. They are the most populous group of rodents in the Northern Hemisphere and occupy a vast variety of habitats on every continent except Antarctica. They are often found in fossil occlusions of bones cached by past predators such as owls and other birds of prey.

Voles, along with lemmings (and sometimes muskrats), are grouped together in the subfamily Arvicolinae. However, the placement of the arvicolines within Muroidea is not settled. Some authorities place Arvicolinae in the family Cricetidae[1][2][3] As such, the voles closest relatives, besides the lemmings and muskrats, are members of the other subfamilies in the Cricetidae, the hamsters and New World rats and mice[4] However, other authorities place the subfamily Arvicolinae in the family Muridae.[5][6][7]. Arvicolinae also is also sometimes referred to as Microtinae or is recognized as a family, Arvicolidae [8]

Voles are commonly mistaken for other small animals. Moles, gophers, mice, rats, and even shrews have similar characteristics and behavioral tendencies. Since voles will commonly use burrows with many exit holes, they can be mistaken for gophers or some kind of ground squirrel. Voles can create and will oftentimes utilize old abandoned mole tunnels thus confusing the land owner into thinking that moles are active. When voles find their way into the home, they are readily misidentified as mice or young rats. In fact, voles are unique and best described as being a little bit like all the other animals they are so commonly thought to be.

Voles are typically small, compact rodents with short legs and short tails that are smaller than the head and body length, and generally less than fifty percent of the head and body length.[5] They have small, rounded ears, blunt snouts, and relatively large eyes.[1] Adult males (and sometimes females) have large sebaceous glands on the hips, flanks, rump, or tail region.[1] They resemble a mouse, but with a stouter body, a shorter hairy tail (true mice in the Mus genus tend to have slender, hairless tails), a slightly rounder head, smaller ears and eyes, and differently formed molars (high-crowned and with angular cusps instead of low-crowned and with rounded cusps). They tend to differ from the lemmings in that most lemmings are even more thickset, with robust bodies and shorter tails.[5]. The muskrat (Ondatr zibethicus), which is sometimes placed in the Arvicolinae with the voles and lemmings, are much larger than other members of the subfamily and have a tail that is longer and flattened laterally, as an adaptation to an aquatic lifestyle.[5] The voles adapted to an arboreal lifestyle have much longer tails than other species of voles, with the tails ranging up to 70 to 80 percent of their head and body length.[5] Voles with a more fossorial lifestyle (the mole voles Prometheomys and Ellobius) have very short tails and incisor teeth that face forward.[5]

Most moles have brown fur with lighter ventral surfaces, although there are variations.

The dental formula for arvicolines is 1/1, 0/0, 0/0, 3/3 = 16. They have stomachs that are either one or two-chambered, complex large intestines, but notably short small intestines.[1] 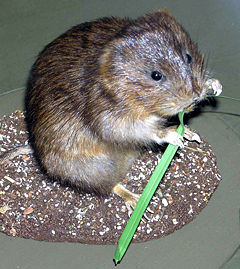 The European water vole or northern water vole (Arvicola amphibius; formerly A. terrestris) is a semi-aquatic rodent found in northwestern and central Europe and Asia. Excellent swimmers and divers, they often are found adjacent to rivers, lakes, and wetlands, but also there are fossorial forms that can be found in dry pastures and woodlands.[5]

Voles are very widespread, found throughout temperate North America, Asia, and Europe. They also occupy a wide range of habitats, including open grassland (where they are numerous), scrub, forests, mountain slopes, wetlands, rivers, lakes, lagoons. There are and even up to 6,000 meters (19,690 feet) above sea level in the Himalayas. There are species that are adapted to arboreal, fossorial, terrestrial, or aquatic lifestyles.[5]

Voles are known for their high reproductive rate, with some producing as many as 17 young in a litter; however, some species, particularly the tree voles, may have litters of only one to three young. The young are born naked and blind, but develop rapidly; some species have young that are themselves reproductive before they are one month old. Overall, vole populations can generally grow very large within a very short period of time. Since litters average 5–10 young, a single pregnant vole in a yard can result in a hundred or more active voles in less than a year. Some bread year round, including giving birth under snow cover.[5][1]

The average life of the smaller vole species is 3–6 months. These voles rarely live longer than 12 months. Larger species, such as the European water vole, live longer and usually die during their second, or rarely their third, winter.

Some species of vole appear to be highly monogamous. The prairie vole is a notable animal model for its monogamous sexual fidelity, since the male is usually faithful to the female, and shares in the raising of pups. (The woodland vole is also usually monogamous.) Another species from the same genus, the meadow vole, has promiscuously mating males, and scientists have changed adult male meadow voles' behavior to resemble that of prairie voles in experiments in which a single gene was introduced into the brain via a virus.[9]

Voles exhibit complex genetic structures with much variation, and appear to be evolving rapidly when compared with other vertebrates. For this reason, they can be useful to archaeologists for dating strata, in a method referred to as the "vole clock."

Most voles are highly herbivorous. Some consume large quantities of foliage, and meadow voles, which consume foliage of grasses can consume their own body weight each day. The arboreal tree voles may consume large quantities of pine needles and the fossorial mole voles may eat various bulbs and tubers. Some voles include seeds and insects in their diet. Like shrews they will eat dead animals and like mice or rats, they can live on most any nut or fruit.

Voles will often eat succulent root systems and will burrow under plants or ground cover they are particularly fond of and eat away until the plant is dead. Voles will readily girdle small trees and ground cover much like a porcupine. This girdling can easily kill young plants and is not healthy for trees or other shrubs. Bulbs in the ground are another favorite target for voles; their excellent burrowing and tunneling gives them access to sensitive areas without clear or early warning.

Many predators such as martens, raccoons, owls, hawks, falcons, coyotes, foxes, snakes, the red tailed hawk, weasels, cats and dogs eat voles. A common predator of voles is the short-eared owl as well as the northern spotted owl, the saw-whet owl, the barn owl, the great gray owl and the northern pygmy owl. Their fur color can help avoid predation via camouflage and when cornered, they can be quite vicious and bite. Some species, such as the northern water vole (Arvicola amphibius) and some mole voles are hunted by humans for their fur.[5]