Falcon is the common name for birds of prey comprising the genus Falco in the family Falconidae, characterized by a short, curved, notched beak, and thin, long, tapered and powerful wings adapted for swift flight. The term falcon also is applied to all members of Falconidae, the falcon family.

Although the members of the genus Falco are known as the "true falcons," there are other genera in Falconidae whose members include the common name of falcon or falconets. These include the forest falcons (genus Micrastur), the laughing falcon (genus Herpetotheres), the pygmy-falcons (genus Polihierax), the spot-winged falconet (genus Spiziapteryx), and the typical falconets (genus Microhierax). This article will be on those members of the genus Falco.

Falcons provide important ecological values in helping to keep the balance of nature by controlling the number of prey species, such as rodents and reptiles. For humans, they not only add to the wonder of nature, but have been used for thousands of years in falconry, the art or sport of using trained raptors (birds of prey) to hunt or pursue game for humans. 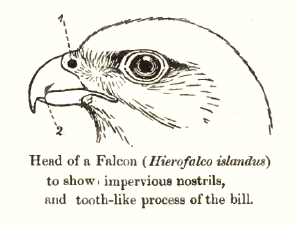 Most members of the genus Falco show a tooth on the upper mandible.

The falcon family Falconidae includes about 60 species of diurnal birds of prey, notably the falcons and caracaras. They differ from other Falconiformes in killing with their beaks instead of their feet. They have a "tooth" on the side of their beak for this purpose. The true falcons in genus Falco make up over one-half of the extant species of Falconidae.

Adult falcons have thin tapered wings, which enable them to fly at high speed and to change direction rapidly. Peregrine falcons are the fastest-moving creatures on Earth. Fledgling falcons, in their first year of flying, have longer flight feathers, which makes their configuration more like that of a general-purpose bird such as a broadwing. This makes it easier for them to fly while learning the exceptional skills required to be effective hunters in their adult configuration.

The word falcon comes from its Latin name falco, related to Latin falx ("sickle"), and probably is so named from the shape of its curved beak or talons (Webster and McKechnie 1983), but possibly also from the shape of its spread wings (Harper 2001). Technically, however, a falcon's wings are shaped more like a scythe than a sickle.

The traditional term for a male falcon is tercel (British English) or tiercel (American English), from Latin tertius, meaning "third," because of the belief that only one in three eggs hatched a male bird or the third egg of a clutch (COED 2007). Some sources give the etymology as deriving from the fact that a male falcon is approximately one-third smaller than the female. A falcon chick that is still in its downy stage, especially one reared for falconry, is known as an eyas (FD 2007), sometimes spelled eyass.

Some small insectivorous falcons with long narrow wings are called hobbies, and some that hover while hunting for small rodents are called kestrels. The kestrels are usually small and stocky falcons and feed chiefly on terrestrial vertebrates and invertebrates of appropriate size, such as rodents, reptiles, or insects. The slightly larger hobbies feed mainly on smaller birds. The larger Falco species, such as the peregrine falcon, feed on mid-sized birds and terrestrial vertebrates, taking prey of up to 5-pound sage grouse size.

As is the case with many birds of prey, falcons are renowned for their exceptional powers of vision; one species has been found to have a visual acuity of 2.6 times that of a normal human (Fox et al. 1976).

In February 2005, the Canadian scientist Louis Lefebvre announced a method of measuring avian intelligence in terms of their innovation in feeding habits (Lefebvre 2005). The falcon and crow family scored highest on this scale.

Compared to other birds of prey, the fossil record of the falcons is not well distributed in time. The oldest fossils tentatively assigned to this genus are from the Late Miocene, less than 10 million years ago. This coincides with a period in which many modern genera of birds became recognizable in the fossil record. The falcon lineage—probably of North American or African, possibly Middle Eastern or European origin, given the distribution of fossil and living Falco taxa—is likely to be somewhat older, however.

The first group contains the kestrels, probably excepting the American kestrel (Groombridge et al. 2002). These are usually small and stocky falcons of mainly brown upperside color and sometimes sexually dimorphic. Three African species that are generally gray in color stand apart from the typical members of this group.

The second group contains slightly larger (on average) and more elegant species, the hobbies and relatives. These birds are characterized by considerable amounts of dark slaty gray in their plumage; the malar area is nearly always black.

Third are the peregrine falcon and its relatives. Powerful birds, often the size of small hawks, they also have a black malar area (except some very light color morphs), and often a black cap also. Otherwise, they are somewhat intermediate between the other groups, being chiefly medium gray with some lighter or brownish colors on the upper side. They are on average more delicately patterned than the hobbies and if the hierofalcons are excluded (see below), this group contains typically species with horizontal barring on the underside. As opposed to the other groups, where tail color varies much in general but little according to evolutionary relatedness,[1] the tails of the large falcons are quite uniformly dark gray with rather inconspicuous black banding and small white tips, though this is probably plesiomorphic.

Very similar to these and sometimes included therein are the 4 or so species of hierofalcons (literally, "hawk-falcons"). Hierofalcons represent taxa with usually more phaeomelanins, which impart reddish or brown colors, and generally more strongly patterned plumage reminiscent of hawks. Notably, their undersides have a lengthwise pattern of blotches, lines, or arrowhead marks.

While these three or four groups, loosely circumscribed, are an informal arrangement, they probably contain several distinct clades in their entirety. A study of mtDNA cytochrome b sequence data of some kestrels (Groombridge et al. 2002) identified a clade containing the common kestrel and related "malar-striped" species, to the exclusion of such taxa as the greater kestrel (which lacks a malar stripe), the lesser kestrel (which is very similar to the common but also has no malar stripe), and the American kestrel. The latter species has a malar stripe, but its color pattern—apart from the brownish back—and notably also the black feathers behind the ear, which never occur in the true kestrels, are more reminiscent of some hobbies. The malar-striped kestrels apparently split from their relatives in the Gelasian, roughly two and a half to two million years ago, and are apparently of tropical East African origin. The entire "true kestrel" group—excluding the American species—is probably a distinct and quite young clade, as also suggested by their numerous apomorphies.

Other studies (Helbig et al. 1994; Wink et al. 1998; Wink and Sauer-Gürth 2000; Wink et al. 2004; Nittinger et al. 2005) have confirmed that the hierofalcons are a monophyletic group—and, incidentally, that hybridization is quite frequent in at least in the larger falcon species. Initial studies of mtDNA cytochrome b sequence data suggested that the hierofalcons are basal among living falcons (eg., Helbig et al. 1994; Wink et al. 1998). This is now known to be an erroneous result due to the presence of a numt or nuclear mitochondrial DNA (Wink and Sauer-Gürth 2000); in reality the hierofalcons are a rather young group, originating maybe at the same time as the start of the main kestrel radiation, about 2 million years ago. This lineage seems to have gone nearly extinct at some point in the past; the present diversity is of very recent origin, though little is known about their fossil history (Nittinger et al. 2005).

The phylogeny and delimitations of the peregrine and hobby groups are more problematic. Molecular studies have only been conducted on a few species, and namely the morphologically ambiguous taxa have often been little researched. The morphology of the syrinx, which contributes well to resolving the overall phylogeny of the Falconidae (see Griffiths 1999; Griffiths et al. 2004) is not very informative in the present genus. Nonetheless, a core group containing the peregrine and barbary falcons, which in turn group with the hierofalcons and the more distant prairie falcon (which was sometimes placed with the hierofalcons, even though it is entirely distinct biogeographically), as well as at least most of the "typical" hobbies, are confirmed to be monophyletic as suspected (Helbig et al. 1994; Wink et al. 1998).

Given that the American Falcos of today belong to the peregrine group or are apparently more basal species, it seems that the most successful evolutionary radiation initially was an Holarctic one that originated possibly around central Eurasia or in (northern) Africa. One or several lineages were present in North America by the Early Pliocene at latest.

The origin of today's major Falco groups—the "typical" hobbies and kestrels for example, or the peregine-hierofalcon complex, or the aplomado falcon lineage—can be quite confidently placed from the Miocene–Pliocene boundary through the Zanclean and Piacenzian and just into the Gelasian; that is, from about 8 to 2.4 million years ago, when the malar-striped kestrels diversified. Some groups of falcons, such as the hierofalcon complex or the peregrine-barbary superspecies have only evolved in more recent times; the species of the former seem to be a mere 120,000 years old or so (Nittinger et al. 2005). 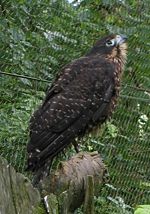 New Zealand falcon, a relative of the hobbies 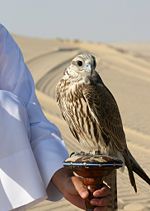 The sequence follows the taxonomic order of White et al. (1996), except for adjustments in the kestrel sequence.