In zoology, a mole is the common name for any of the small insectivorous mammals of the family Talpidae of the order Soricomorpha. Moles typically live underground, burrowing holes, but some species are semi-aquatic. Moles have small or vestigial eyes and ears.

Although moles often are considered agricultural and lawn pests, they do provide a number of ecological values. Moles can benefit soil fertility by aerating and tilling it, and in their role in food chains they consume animals themselves considered pests. For humans, moles also add to the diversity and wonder of nature.

The word mole also is used in zoology for members of the family Chrysochloridae, known as golden moles, and for small burrowing Australian marsupials called marsupial moles. However, the "true moles" are exclusive to the Talpidae family and are the focus of this article.

True moles have thickset, cylindrical bodies, with a short neck, and are covered in fur, which is typically light brown to dark gray or light black. Most are small, about 15 centimeters (six inches) in length, with the smallest North American mole being the American shrew-mole (Neurotrichus gibbsii), which is about ten centimeters (cm) in length, including a three cm long tail, which weighs about 10 grams. Perhaps the largest mole is the Russian desman (Desmana moschata), which has a body that is 18 to 21 cm long and a 17 to 20 cm in length, and weight from 400 to 520 grams.

Moles have small or rudimentary eyes covered in fur or skin and that have little visual acuity, but can detect light. Moles are functionally blind in this respect and obtain much of their sensory input from the touch sensitive Eimer's organs at the end of its long, bi-lobed snout. The ears are generally not visible, but moles have good hearing.

The forelimbs of moles are short, broad, powerful, and adapted for digging, having a body structure like a spade and with digging claws.

Moles tunnel below the ground, digging perhaps 15 to 20 meters in a single day. Most are good swimmers and some are semi-aquatic. For example, the star-nosed mole (Condylura cristata), found in eastern Canada and the north-eastern United States, lives in wet lowland areas and can forage along the bottoms of streams and ponds. Like other moles, this animal digs shallow surface tunnels for foraging; often, these tunnels exit underwater. The Russian desman, Desmana moschata, is a small semi-aquatic mole that inhabits the Volga, [[Don River|Don, and Ural River basins in Russia, Ukraine, and Kazakhstan. It constructs burrows into the banks of ponds and slow moving streams, but prefers small, overgrown ponds with abundance of insects and amphibians. The hind feet are webbed and the tail laterally flattened—specializations for its aquatic habitat.

Most species of mole tend to be solitary, but the Russian desman often lives in small (usually non-kin related) groups of two to five animals and appears to have a complex (but largely unstudied) communication and social system. The star-nosed mole also is speculated to be colonial.

Moles can be found in North America, Europe, and Asia.

Male moles are called boars; females are called sows. A group of moles is called a labour. Since at least the era of Early Modern English the mole was also known in the United Kingdom as a "moldywarp" or "moldywarpes" (Rackham 2004).

Moles are insectivores: a carnivore with a diet that consists chiefly of small creatures like insects. For many species, a mole's diet is primarily composed of earthworms and other small invertebrates. The mole also will occasionally catch small mice at the entrance to its burrow. Once the food is caught, the mole will either store it for later or feed it to its young. The star-nosed mole feeds on small invertebrates, aquatic insects, worms, and mollusks. The Russian desman may feed on small amphibians as well.

The star-nosed mole can detect, catch, and eat food faster than the human eye can follow (under 300 milliseconds) (Salisbury 2005).

Moles are considered to be an agricultural pest in some countries, while in others, such as Germany, they are a protected species but may be killed if a permit is received. Problems cited as caused by moles include: contamination of silage with soil particles (making it unpalatable to animals), the covering of pasture with fresh soil reducing its size and yield, damage to agricultural machinery by the exposure of stones, damage to young plants through disturbance of the soil, weed invasion of pasture through exposure of fresh tilled soil, and damage to drainage systems and watercourses. Other species such as weasels and voles may use mole tunnels to gain access to enclosed areas or plant roots. 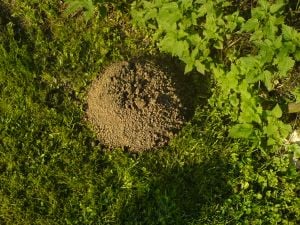 Moles that burrow in the lawns of humans can disturb the earth, raising molehills and causing enough aesthetic problems, and killing enough of the lawn, to be considered as pests.

On the other hand, moles benefit soil by aerating and tilling it, adding to its fertility, and they consume animals themselves considered pests. Contrary to popular belief, moles do not eat plant roots.

Moles are controlled with traps and poisons such as calcium carbide and strychnine. Historically, they have also been trapped and valued for their fur (FWS 1914). The term moleskin originally referred to the short, silky fur of a mole, but now is more generally used for heavy cotton fabric, woven and then sheared to create a short soft pile on one side. The word is also used for clothing made from this fabric.

The castor plant is known as the "mole plant," because of its reputation as a mole-repelling companion plant. It contains several substances that are either toxic or just unpleasant and may emit some of these into the soil via its roots. One of its most well-known toxins is ricin, in the news as an extract reputed to be attractive to terrorists as a poison. Castor oil, too, is advocated as a mole repellent.

Other common remedies for moles include cat litter and blood meal to repel the mole, or flooding or smoking its burrow. There are also devices sold to trap the mole in its burrow. When one sees the "mole hill" moving, they know where the animal is, and can then stab it. Other, "humane" traps are used to capture the mole so that it may be transported elsewhere. 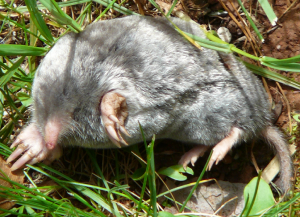 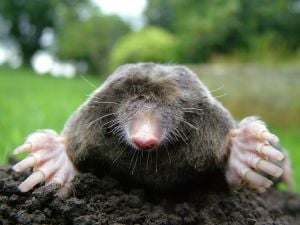 A close-up photograph of a mole.

The family is divided into 3 subfamilies, 7 tribes, and 17 genera:

Similar animals to true moles are found in family Chrysochloridae (the golden moles) and family Notoryctidae (the marsupial moles). Neither is closely related to true moles.

Golden moles are small, insectivorous, burrowing mammals native to southern Africa. They belong to the family Chrysochloridae, and so are taxonomically distinct from the true moles. The golden moles bear a remarkable resemblance to the marsupial moles of Australia, so much so that, the marsupial/placental divide notwithstanding, they were once thought to be related.

Golden moles live almost exclusively underground. Like several other burrowing mammals with similar habits, they have short legs with powerful digging claws, very dense fur that repels dirt and moisture, and toughened skin, particularly on the head. They retain eyes, but they are non-functional and covered with skin and fur; the ears are just tiny openings; and, like the marsupial moles, they have an enlarged leather-like pad to protect their nostrils.

Golden moles range in size from about eight to about 20 centimeters. They have muscular shoulders and an enlarged third claw to aid digging on the forelimbs, with no fifth digit and vestigial first and fourth; the hind feet retain all five toes and are webbed to allow efficient backward shoveling of the soil loosened with the front claws. It feeds off small insects.

The marsupial moles of the family Notoryctidae are rare and poorly understood burrowing mammals of the deserts of western Australia. Marsupial moles spend most of their time underground, coming to the surface only occasionally, probably mostly after rains. They are blind, their eyes having become reduced to vestigial lenses under the skin, and they have no external ears, just a pair of tiny holes hidden under thick hair.

The head is cone-shaped with a leathery shield over the muzzle, the body tubular, and the tail a short bald stub. They are between 12 and 16 centimeters long, weigh 40 to 60 grams, and are uniformly covered in fairly short, very fine pale cream to white hair with an iridescent golden sheen. Their pouch has evolved to face backwards so that it does not fill with sand.

Marsupial moles provide a remarkable example of convergent evolution, with true moles generally, and with the golden moles of Africa in particular.