Marsupials are non-placental mammals belonging to the infraclass (or order) Marsupialia. Marsupial females typically have an external pouch (called the marsupium, from which the name 'Marsupial' derives) in which the immature young are raised after birth until early infancy. The newborn typically crawl to this pouch after birth, and attach themselves to milk-secreting teats (nipples), and are nursed until they can survive outside the pouch. This time period in the pouch is similar to the later stages of a placental mammal's development in the womb.

Well-known marsupials include kangaroos, opossums, bandicoots, wombats, and the flying phalanger. Marsupials are one of three groups of mammals, the others being monotremes and placental Mammals. Most mammals (95 percent) are placentals, such as rodents, bats, dogs, horses, primates, and whales. Many marsupials resemble familiar placental species, including the wombat resembling a groundhog; the glider, a flying squirrel; the marsupial mole, a placental mole; and the cuscus, a monkey (Mayr 2001, Towle 1989).

Marsupials are native to Australia, New Guinea, Tasmania, and the Americas. There are over 330 species of marsupials, with most (over 200 species) native to Australia and nearby islands to the north. They are the dominant mammals in Australia, which have almost no native placental mammals. There are also many extant (living) marsupial species in South America. There is only one species, the common or Virginia opossum, that is native to North America.

Unlike placental mammals (Placentalia), almost all marsupials lack the placenta that connects the mother with the developing fetus in the womb. Some marsupials have a rudimentary placenta that functions for only a short time, such as the bandicoot.

Marsupials differ from placental mammals in their reproductive traits. The female has two vaginas (the tubular tract leading from the uterus to the exterior of the body). Both of the vaginas open externally through one orifice, but lead to different compartments within the uterus. Males usually have a two-pronged penis, which corresponds to the females' two vaginas. The penis only passes sperm.

Marsupials have a cloaca (posterior opening that serves as the only such opening for the intestinal and urinary tracts) that is connected to a urogenital sac in both sexes. Waste is stored there before expulsion.

The pregnant female develops a kind of yolk sack in her womb which delivers nutrients to the embryo. The embryo is born at a very early stage of development (at about four to five weeks), upon which it crawls up its mother's belly and attaches itself to a nipple (which is located inside the pouch). It remains attached to the nipple for a number of weeks. The offspring later passes through a stage where it temporarily leaves the pouch, returning for warmth and nourishment.

Kangaroos, for example, are born after a gestation of 31–36 days, and may be only about one inch long. At this stage, only the forelimbs are somewhat developed, to allow the newborn to climb to the pouch and attach to a teat. The joey will usually stay in the pouch for about nine months (180–320 days for the Western Grey) before starting to leave the pouch for small periods of time. It is usually fed by its mother until reaching 18 months.

The early birth of marsupials removes the developing young much sooner than in placental mammals, and marsupials have not needed to develop a complex placenta to protect the young from its mother's immune system. Early birth places the tiny new-born marsupial at greater risk, but significantly reduces the risks associated with pregnancy, as there is no need to carry a large fetus to full-term in bad seasons.

Because a newborn marsupial must climb up to its mother's nipples, the otherwise minimally developed newborn has front limbs that are much better developed than the rest of its body. This requirement is responsible for the more limited range of locomotory adaptations in marsupials than placentals; marsupials must retain a grasping forepaw and cannot develop it into a hoof, wing, or flipper as some groups of placental mammals have done.

It was once considered that marsupials were a primitive forerunner of the placental mammals. However, fossil evidence, first announced by researcher M.J. Spechtt in 1982, does not support this once-common belief. Rather, both main branches of the mammal tree appear to have originated at around the same time, toward the end of the Mesozoic era, and have been competitors since that time.

During the time of the Mesozoic (252 to 65 million years ago), the continents were initially joined as a single landmass (Pangaea); however, by the end of the Mesozoic there was a dramatic rifting of this supercontinent into a northern continent, Laruasia, and a southern continent, Gondwana. Australia is considered to have broken off of the larger landmass about 60 million years ago (Towle 1989). It is held that both marsupials and placentals existed at the time of the rifting of Australia, but no or few placentals inhabited Australia at that time.

In most continents, placentals were much more successful and no marsupials survived. In South America, the opossums retained a strong presence, and in the Tertiary (about 65 million years ago at the end of the Cretaceous to about 1.6 million years ago) marsupials produced predators such as the borhyaenids and the saber-toothed Thylacosmilus. In Australia, placental mammals were not present throughout much of the Tertiary and marsupials and monotremes dominated completely. Native Australian placental mammals are more recent immigrants (e.g., the hopping mice).

There are many small, arboreal species in each group. Those in America are often called "opossums," while many of those in Australia are called "possums." 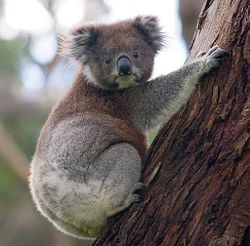