Monotremes are egg-laying mammals of the order Monotremata, the only order in Subclass Monotremata (or Prototheria). Monotremes represent one of the three major subdivisions of mammals. The other two groups, the marsupials (Marsupialia or Metatheria) and placentals (Placentalia or Eutheria) give birth to live young.

There are only five extant (living) species of monotremes, the platypus (Ornithorhynchus anatinus) and four species of echidna. The platypus is a semi-aquatic, duck-billed mammal endemic to eastern Australia and Tasmania—it is one of the few venomous mammals. Echidnas, sometimes referred to as "spiny anteaters," are native to New Guinea and Australia. Reflecting the diversity of nature, so unique is the appearance of the platypus that initial reports were met with skepticism that such an animal actually existed.

The key physiological difference between monotremes and other mammals is the one that gave them their name. Monotreme (monos, single + trema, hole) means "single opening" in Greek, and comes from the fact that their urinary, defecatory, and reproductive systems all open into a single duct, the cloaca. Other mammal females have separate openings for reproduction, urination, and defecation.

Monotremes are placed in two families—with the platypus belonging to Ornithorhynchidae and echidnas in the Tachyglossidae family.

An infant monotreme is known as a puggle.

Like other mammals, monotremes are warm-blooded, with a high metabolic rate (though not as high as other mammals, see below); have hair on their bodies; produce milk to feed their young; have a single bone in their lower jaw; and have three middle ear bones.

The platypus (Ornithorhynchus anatinus) is the sole living representative of its family (Ornithorhynchidae) and genus (Ornithorhynchus), though a number of related species have been found in the fossil record. The platypus has webbed feet, a characteristic bill, and a broad tail. The bizarre appearance of this egg-laying, duck-billed mammal baffled naturalists when it was first discovered, with some considering it an elaborate fraud. The male platypus has a spur on the hind foot which delivers a poison capable of causing severe pain to humans.

Echidnas are small mammals that are covered with coarse hair and spines. Superficially, they resemble both the anteaters of South America and other spiny mammals like hedgehogs and porcupines. Echidnas have snouts which have the functions of both the mouth and nose.

Monotremes were very poorly understood for many years, and to this day some of the nineteenth-century myths that grew up around them endure. It is still sometimes thought, for example, that the monotremes are "inferior" or quasi-reptilian, and that they are a distant ancestor of the "superior" placental mammals. It now seems plain that modern monotremes are the survivors of an early branching of the mammal tree—a later branching is thought to have led to the marsupial and placental groups.

Similarly, it is still sometimes said that monotremes have less developed internal temperature control mechanisms than other mammals, but more recent research shows that monotremes (such as the platypus, which can maintain its body temperature even while living in an icy mountain stream) maintain a constant body temperature in a wide variety of circumstances without difficulty. Early researchers were misled by two factors. For one, monotremes maintain a lower average temperature than most mammals (around 32°C/90°F, compared to about 35°C/95°F for marsupials, and 38°C/100°F for most placentals). Secondly, the Short-beaked Echidna (which is much easier to study than the reclusive platypus) only maintains normal temperature when it is active: during cold weather, it conserves energy by "switching off" its temperature regulation.

Unlike other mammals, the urinary, defecatory, and reproductive systems of monotremes all open into a single duct, the cloaca. This structure is very similar to the one found in reptiles. In contrast to the single cloaca of monotremes, other mammal females have separate openings for reproduction, urination and defecation: the vagina, the urethra, and the anus.

Monotreme reproduction is also unique among mammals. Monotremes lay eggs. They are the only extant mammals that lay eggs instead of giving birth to live young. However, the egg is retained for some time within the mother, who actively provides the egg with nutrients. Monotremes also lactate, but have no defined nipples, excreting the milk from their mammary glands via openings in their skin.

All species of monotremes are long-lived, with low rates of reproduction and relatively prolonged parental care of infants. 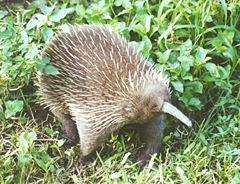 Living monotremes lack teeth as adults. Fossil forms and modern platypus young have the "tribosphenic" (three-cusped) molars, which are one of the hallmarks of mammals. However, recent work suggests that monotremes acquired this form of molar independently of placental mammals and marsupials, although this is not well established (Luo et al. 2001).

The jaw of monotremes is constructed somewhat differently from those of other mammals, and the jaw opening muscle is different.

As in all true mammals, the tiny bones that conduct sound to the inner ear are fully incorporated into the skull, rather than lying in the jaw as in cynodonts and other pre-mammalian synapsids. However, this feature, too, is now claimed to have evolved independently in monotremes and therians, although, like the convergent evolution of the tribosphenic molar, this is disputed(1) (2) (Rich et al. 2005). The imminent sequencing of the platypus genome [1] should shed light on this and many other questions regarding the evolutionary history of the monotremes. The external opening of the ear still lies at the base of the jaw.

The monotremes have extra bones in the shoulder girdle, including an interclavicle, which are not found in other mammals.

Monotremes retain a reptile-like gait, with legs that are on the sides of rather than underneath the body. The monotreme leg bears a spur in the ankle region; the spur is non-functional in echidnas, but contains a powerful venom in the male platypus.

The only surviving examples of monotremes are all indigenous to Australia and New Guinea, although there is evidence that they were once more widespread. Fossil and genetic evidence shows that the monotreme line diverged from other mammalian lines about 150 million years ago and that both the short-beaked and long-beaked echidna species are derived from a platypus-like ancestor.

Fossils of a jaw fragment 110 million years old were found at Lightning Ridge, New South Wales. These fragments, from species Steropodon galmani, are the oldest known fossils of monotremes. Fossils from the genera Kollikodon, Teinolophos, and Obdurodon have also been discovered. In 1991, a fossil tooth of a 61-million-year-old platypus was found in southern Argentina (since named Monotrematum, though it is now considered to be an Obdurodon species). (See fossil monotremes below.)

Excepting Ornithorhynchus anatinus, all the animals listed in this section are extinct.