Elephant shrew (or elephant-shrew) is the common name for any of the small insectivorous mammals comprising the order Macroscelidea, whose living members are characterized by a rodent- or opossum-like appearance, with hind limbs longer than forelimbs, elongated snouts, relatively large eyes and ears, complete auditory bullae, and upper canines with two roots. Also known by the common name of sengis (sing., "sengi")—which helps disassociate them from the true shrews (order Soricomorpha, family Soricidae) and the treeshrews (order Scandentia)—extant elephant shrews comprise only one family, Macroscelididae, with four genera and less than 20 species. Elephant shrews are restricted to Africa and, with the notable exception of western Africa and the Sahara region, are found throughout the continent.

Elephant shrews play a ecological role in food chains, consuming invertebrates, such as insects, spiders, centipedes, millipedes, and earthworms, and in some cases plant matter when available, while being preyed upon by snakes, birds of prey, and various mammals. they help to maintain natural checks of insect populations. For humans, this unique animals, which in the case of some Rhynchocyon species can be very colorful, add to the joy of nature with their "endearing appearance and behavior" (Fitzgerald 2004). 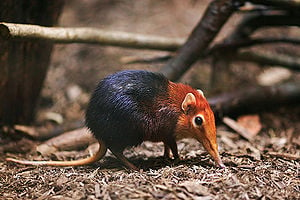 Elephant shrews are small, quadrupedal, insectivorous mammals resembling rodents or opossums, with scaly tails, elongated snouts, and rather long legs for their size, which are used to move in a hopping fashion like rabbits. The hind limbs are much longer than the forelimbs, and they have relatively large eyes and ears. Most have a pale ring around each eye (Fitzgerald 2004). Sengis have complete auditory bullae, complete zygomatic arches, and relatively small olfactory lobes in the brain (Myers 2014). Some elephant shrews are brightly colored, with the genus Rhynchocyon including the most colorful elephant shrews (Rathbun 2014). The small species tend to be shades of gray and brown (Rathbun 2014).

Sengis range in size from that of a mouse to that of a large rat or squirrel, from about 10 centimeters to more than 30 centimeters and from 25 grams to 700 grams. The larger adult members of the Rhynchocyon genus range from 350 to 700 grams, with head/body lengths of up to 31 centimeters and tail lengths of up to 25 centimeters (Rathburn 2014). Adults of the Macroscelides may be about 25 grams, while members of Petrodromus may range up to 200 grams. The short-eared elephant shrew has an average size of 150 mm (5.9 in).

Elephant shrews have large canine teeth, and also high-crowned cheek teeth like those of ungulates (Rathbun 1984). The upper canine has two roots (Myers 2014). Their dental formula is

Elephant shrews are widely distributed in Africa, with the exception of western Africa and the Sahara region. Their distribution includes the island of Zanzibar but not Madagascar (Fitzgerald 2004). The Macroscelides genus is found only in southwestern Africa, while most Elephantuuls species are found in southern Africa and eastern Africa. Members of Rhynchocyon are found in eastern and central Africa. Members of Petrodromus are widespread (Rathbun 2014).

Although elephant shrews are not common anywhere, they can be found in almost any type of habitat, from the Namib Desert, one of the friest regions of the earth, to boulder-strewn outcrops in South Africa to thick forest. Members of Elephantulus and Macroscelides tend to be found in more arid lowlands, such as savannahs, rocky outcrops, scrublands, and deserts (Rathbun 2009), while members of the other two genera tend to be confined to dense woodlands and lowland and montane forests (Rathbun 2014). One species, the North African elephant shrew, remains in the semiarid, mountainous country in the far northwest of the continent.

Members of the giant elephant shrews (giant sengis)—that is, belonging to the Rhynchocyon genus, are considered to be strictly diurnal, while the soft-furred elephant shrews often show activity during both day and night (Rathbun 2014). The giant sengis build leaf nests on the forest floor, or dig small conical holes in the soil, bandicoot-style, or use natural crevices. Soft-furred sengis often construct burrows or use the burrows of other species (Rathbun 2014). Some soft-furred species make a series of cleared pathways through the undergrowth and spend their day patrolling them for insect life. If disturbed, the pathway provides an obstacle-free escape route. Elephant shrews are wary, well camouflaged, and adept at dashing away from threats.

Elephant shrews are not highly social animals, but many live in monogamous pairs (mating for life), which share and defend a home territory they mark using scent glands (Rathbun 1984). Monogamous pairs tend to defend congruent territories sex-specifically: Females tend to drive away other females, while males try to ward off other males (Rathbun 2014; Fitzgerald 2004). Social behaviors are not very common and they even have separate nests. Individuals also may live alone or in small groups (Fitzgerald 2004).

In solitary species, the males and females stay together for several days, mate, and then go their separate ways. Pair-bonded couples remain together for as long as alive, but they may not be strictly monogamous, but mate with other individuals while maintaining their pair relationship (Fitzgerald 2004).

Female elephant shrews have four to six mammae, and typically give birth to litters of one, two or rarely three (or more rarely four) young (Fitzgerald 2004). After a gestation period varying from 45 to 60 days, the female will give birth to their litters of one to three young several times a year (Rathbun 1982).

Most elephant shrews are born precocial in small litters, although members of the giant elephant shrews (Rhynchocyon) are more altricial (Rathbun 2014). The young remain in the nest for several days before venturing outside (Rathbun 1982). After five days, the young's milk diet is supplemented with mashed insects, which are collected and transported in the cheek pouches of the female. The young then slowly start to explore their environment and hunt for insects. After about 15 days, the young will begin the migratory phase of their lives, which lessens the dependency of the young on their mother. The young will then establish their own home ranges (about 1 km2) and will become sexually active within 41–46 days (Rathbun 1992).

Their lifespans range form one to five years in the wild, with the longest known captive sengi living to be eight years and nine months (Fitzgerald 2004).

Elephant shrews mainly eat invertebrates, such as insects, spiders, centipedes, millipedes, and earthworms. Some elephant shrews also feed on small amounts of plant matter when available, especially new leaves, seeds, and small fruits (Rathbun 1992). An elephant shrew uses its nose to find prey and uses its tongue to flick small food into its mouth, much like an anteater. Eating large prey can pose somewhat of a challenge for an elephant shrew. For example, a giant elephant shrew struggling with an earthworm must first pin its prey to the ground with a forefoot. Then, turning its head to one side, it chews pieces off with its cheek teeth, much like a dog chewing a bone. This is a sloppy process, and many small pieces of worm drop to the ground; these are simply flicked up with the tongue. Elephant shrews are preyed upon by snakes, birds of prey, and carnivores. They have a relatively low reproductive rate and short life-span, but have keen senses, swift reflexes, and are alert and primed for escape (Fitzgerald 2004).

In the past, elephant shrews have been classified with the shrews and hedgehogs as part of the Insectivora; regarded as distant relatives of the ungulates; grouped with the treeshrews; and lumped in with the hares and rabbits in the Lagomorpha. Recent molecular evidence, however, strongly supports a superorder Afrotheria that unites tenrecs, and golden moles with certain mammals previously presumed to be ungulates, including hyraxes, sirenians, aardvarks and elephants, as well as the elephant shrews. 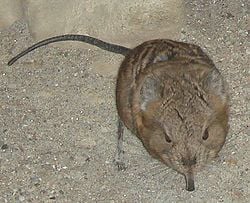 An elephant shrew from Frankfurt Zoo 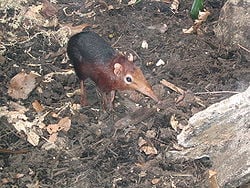 A male black and rufous elephant shrew at the National Zoo in Washington, DC

Many more species, and an additional four families, are known from fossils, with traces as far back as the Eocene and peaking during the Miocene and Pliocene (24 to 2 mya) (Fitzgerald 2004). All of these are found in Africa. They were separate from the similar-appearing order Leptictida. A considerable diversification of macroscelids occurred in the Paleogene. Some, such as Myohyrax, were so similar to hyraxes, they were initially misidentified as belonging to that group, while others, such as Mylomygale, were relatively rodent-like. These unusual forms all died out by the Pleistocene. Although macroscelids have been classified with many groups, often on the basis of superficial characteristics, considerable morphological and molecular evidence now indicates placing them within Afrotheria, probably close to the base of Paenungulata.

The traditional common English name of elephant shrew comes from a fancied resemblance between their long noses and the trunk of an elephant, and an assumed relationship with the shrews (family Soricidae). It has become plain that the elephant shrews are not to be classified with the superficially similar true shrews, but ironically are rather more closely related to elephants and their kin within the newly recognized clade or superorder Afrotheria, which includes the sengis (order Macroscelidea), elephants (Proboscidea), hyraxes (order Hyracoidea), manatees and dugons (order Sirenia), aardvarks (order Tubulidentata), and Afrosoricida, including golden-moles, tenrecs, and otter-shrews (Fitzgerald 2004).

The biologist Jonathan Kingdon proposed the elephant shrews be called sengis (Kingdon 1997), a term derived from the Bantu languages of Africa. Sengis has become popular both in the scientific and popular literature.