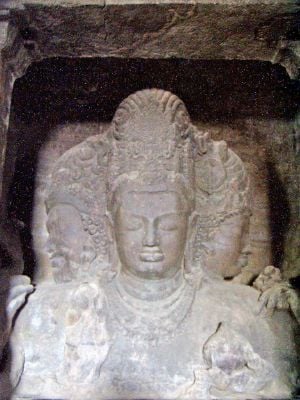 The Elephanta Caves represent the focal point of the Elephanta Island, located in the Mumbai harbour off the coast of Mumbai (Bombay), India. In 1987, UNESCO designated the caves a UNESCO World Heritage Site.[1] Many domestic and foreign tourists have visited it. In recent years, complaints have been made that visitors mistreat this important cultural and historic site.[2][3] Most of the sculptures had been defaced by the Portuguese, who used the sculptures as target practice in the seventeenth century. The Portuguese also gave the island its modern name, Elephanta from Gharapuri.[4]

The caves have been dated back to the Silhara kings of the ninth through thirteenth centuries (810–1260). Some of the sculptures of the site have been attributed to the imperial Rashtrakutas of Manyakheta (in present day Karnataka), the Trimurti of Elephanta showing the three faces of Shiva almost akin to the Trinity of Brahma, Vishnu, and Mahesh, the royal insignia of the Rashtrakutas. Other Rashtrakuta sculptures include the reliefs of Nataraja and Sadashiva and the splendid sculptures of Ardhanarishvara.

The rock-cut temple complex covers an area of 60,000 sq ft consisting of a main chamber, two lateral ones, courtyards and subsidiary shrines. The site of those magnificent caves contains beautiful reliefs, sculptures, and a temple to the Hindu god Śiva. The caves have been hewn from solid rock.[5]

Legend advances that the temple complex serves as the abode of Shiva.

Trimurti Sadasiva, carved in relief at the end of the North-South axis, embodies the most important sculpture. The three headed-Shiva image, representing Panchamukha Shivaimage, stands twenty feet high.[6] The right half-face shows him as a young person with sensuous lips, embodying life and its vitality. In his hand he holds something that resembles a rose bud; again with the promise of life and creativity. That face closely resembles Brahma, the creator or Uma or Vamadeva, the feminine side of Shiva.[7] The left half-face, on the side, resembles a young man, mustached, and angry. He depicts Shiva as Aghora Bhairava[8], as the one whose anger can engulf the entire world in flames leaving only ashes behind. That represents Shiva, the Destroyer. The central face, benign, meditative, as the preserver Vishnu, depicting Shiva as the yogi—Yogeshwar—in deep meditation praying for the 'preservation' of humanity. 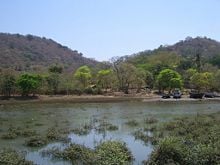 The island as seen from close to the boat landing. 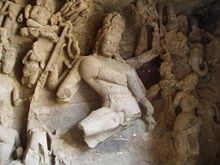 Sculpture inside a cave.

Elephanta Island (also called Gharapuri Island or place of caves) numbers among the islands in Mumbai Harbour, east of Mumbai, India. That island serves as a popular tourist destination for a day trip because of the island's cave temples, the Elephanta Caves, that have been carved out of rock.

The island, easily accessible by ferry from Mumbai, sits about ten km from the south east coast of the island city. Boats leave daily from the Gateway of India, taking about an hour each way for the journey. From the boat landing stage on the island, a walkway leads to steps that go up to the famous caves. Along the path, hawkers sell souvenirs that may be bought at a reasonable price, as well as stalls to buy food and drinks.

Known in ancient times as Gharapuri, seventeenth century Portuguese explorers, gave the present name Elephanta, after seeing a monolithic basalt sculpture of an elephant found here near the entrance. They decided to take it home but ended up dropping it into the sea because their chains proved too weak. Later, the British moved the sculpture to the Victoria and Albert Museum (now Dr Bhau Daji lad Museum) in Mumbai.[9]

The island has an area of 16 km² (six sq miles), located at approximately 18.95° N 72.93° E. The area comes under the jurisdiction of the Raigad district in Maharashtra State. A narrow gauge train takes tourists along the one km pier to the base of the steps which lead to the caves. The island, thickly wooded with palm, mango and tamarind trees, has a population of about 1,200 involved in growing rice, fishing, and repairing boats. The island once presided as the capital of a powerful local kingdom.

A view of the harbor. The center of the image is north-west. 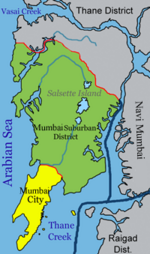 The harbor east of the city.

Mumbai Harbour (aka Front Bay is the southern portion of the Ulhas River estuary, the northern (and narrower) part called Thane Creek. The historical island of Elephanta numbers among the six islands that lie in the harbor. Jawaharlal Nehru Port and Navi Mumbai (New Bombay) lie to the east on the mainland, and the city of Mumbai (formerly Bombay) lies to the west on Salsette Island. The harbor opens to the Arabian Sea to the south. The Gateway of India with its jetty for Elephanta constitutes the most important tourist destination, followed by the INS Vikrant maritime Museum. Mangrove swamps line much of the northwestern and eastern shores of the harbor, and provide a rich habitat for wildlife, including thousands of migrating birds such as flamingos.

It has been the gateway since the days the British established their factory in Mumbai. Over the years, the port has been one of the important reasons for the development of trade and commerce in Mumbai. A natural harbor, three enclosed wet docks service ships:

Four jetties at Jawahar Dweep, an island in the Mumbai harbor, handle crude oil and petroleum products while Pirpau handles chemicals. The port has existed for over 130 years. The Bombay Port Trust, now known as Mumbai Port Trust, founded by the great ship builder Jamshedji Wadia in 1872, manages the Mumbai Port.