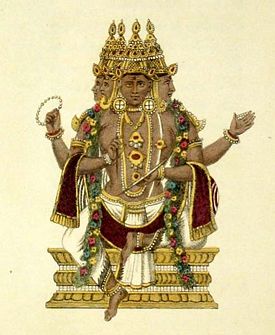 A representation of the Hindu god Brahmā

In Hinduism, Brahmā (Sanskrit: meaning "swelling" or "expansion") is God in his manifestation as Creator of the universe. Brahmā is part of the Trimurti (the Hindu Trinity) alongside Vishnu and Shiva, and represents the creative aspect of Brahman, the supreme cosmic spirit in Hindu philosophy. While these two terms derive from the same Sanskrit root brh (to grow great or strong), they should not be confused, as Brahman refers to the ineffable ground of all being, while Brahmā is the deity which personifies its creative power.

No longer widely worshiped in modern Hinduism, Brahmā is still important in Hindu mythology, and two temples in India continue to honor him today. Brahmā is said to live in Brahmapura, a mythical city located on Mount Meru. As creator of the world, Brahmā is considered to be the father of Dharma (the way of truth) who bestows knowledge upon both human beings and gods.

There are numerous accounts of Brahmā's origin in the Hindu scriptures, which offer divergent versions of his beginnings. According to the widely read and popular Puranas, Brahmā was self-born at the beginning of the universe from the lotus that grows out of Vishnu's navel (consequently, Brahmā is sometimes called Nabhija or "born from the navel"). Another legend says that Brahmā created himself by first creating water. Into the water he deposited a seed that later became the golden egg or Hiranyagarbha. From this golden egg, Brahmā the personified creator was born, with the egg's remaining materials expanding to form the Universe (as a result, he is also known as Kanja, or "born in water").

In the Sapatha Brahmana, Brahmā is said to have come into being from the merger of the human priesthood with fire, the element which had long been the focus of the Vedic rituals. This suggests that Brahmā's historical origins are closely related to Vedic sacrifices. In the Upanishads, Brahmā gradually supplants Prajpati (or the "Lord of Creatures,” the most commonly recognized creator God in the Vedas) as the initial creator, assuming most of Prajpati's characteristics. The Mundaka Upanishad explains that "Brahmā arose as first among the gods, the maker of the universe, the protector of the world" (1.1.1). Such descriptions had previously been given to Prajpati in the Vedas.

In Hinduism, Brahmā is called the creator god that provided the causal force from which the universe was formed. At the beginning of the process of creation, Brahmā is said to have created ten Prajapatis (not to be confused with the deity of the same name), who are believed to be the fathers of the human race. The Manusmriti enumerates them as Marichi, Atri, Angirasa, Pulastya, Pulaha, Kratu, Vasishtha, Prachetas (or Daksha), Bhrigu, and Narada. Brahman is also said to have created the seven great sages or the Saptarishi to help him create the universe. However since these sons were born out of his mind rather than body, they are called Manas Putras or "mind-sons." This latter legend no doubt illustrates why Brahmā is so frequently related to the mind and understanding. Brahmā is said to have a vast capacity for wisdom, and is responsible for all knowledge which has been bestowed upon human beings and gods.

Early Hindu folklore explains that when nothing exists, Brahmā slumbers; when he exhales, the universe comes into existence. After staying awake for a day, two billion years in the human conception of time, Brahmā inhales and falls asleep again, ending the universe as it is known, but taking all its constituents back into himself. In later literature, Brahmā becomes a more purposeful creator, rendering the gods (Agni, Soma, Surya, and so forth) and assigning them to their correct stations in the heavens and upon the earth. Since Brahmā is responsible for all creation, he is thereby also responsible for the creation of every god in the Hindu tradition, including those more powerful than himself. This has been regarded as his greatest contribution. However, Brahmā has apparently drifted out of importance mythologically until his next inhalation, slumber and recreation. 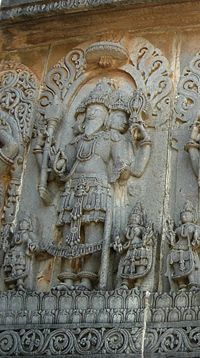 A depiction of the god Brahma found on a Hindu temple.

Brahmā is traditionally depicted with four heads, four faces and four arms. The explanation for the four heads is found in the mythologies of the Puranas. There it is said that when Brahmā was creating the universe, he also made Shatarupā, a female deity with a hundred beautiful forms. Brahmā was immediately infatuated with his creation, and Shatarupā, disquieted by Brahmā's lingering presence, moved in various directions to avoid his gaze. Her attempts to circumvent Brahmā proved futile, however, as Brahmā developed a head in order to see her better regardless of which way she went. Brahmā grew five heads, one facing in each of the four cardinal directions, as well as one above the others. By this point, Lord Shiva had also grown weary of Brahmā's antics, finding it somewhat unsettling that Brahmā had become so enamored with Shatarupā, who, as his creation, was equivalent to his own daughter. In order to control Brahmā's quasi-incestuous advances, Shiva cut off the top head. Ever since the incident, Brahmā has turned to the Vedic scriptures in an attempt at repentance. Thus, he is commonly depicted as holding the four Vedas (wisdom texts) and each head recites one of them.

Brahmā is usually depicted with a white beard on each of his faces, illustrating the extended duration of his existence since the beginning of time. Not one of his four arms bears a weapon, which sets him apart from most other Hindu gods. One of his hands is shown holding a spoon, which is associated with the pouring of holy ghee or oil into a sacrificial pyre. This indicates Brahmā's status as the lord of sacrifices. Another hand holds a water-pot, which is alternately depicted as a coconut shell containing water. Water is the initial, all-encompassing ether in which the first seeds of creation were sowed, and therefore is of great significance. Brahmā also holds a string of rosary beads that he uses to keep track of time. He is usually pictured sitting upon a lotus flower, which represents the earth, and his color is most often red, which represents fire or else the sun and its creative power.

Brahmā's vehicle (vahana) is the Swan. This divine bird is bestowed with a virtue called Neera-Ksheera Viveka or the ability to separate mixtures of milk and water into its constituent parts. In the Hindu tradition, this action represents the idea that justice should be dispensed to all creatures, no matter the complexity of the situation. Also, this ability to separate water and milk indicates that one should learn to similarly differentiate good from evil, accepting that which is valuable and discarding that which is worthless.

It is typical for Hindu gods to be accompanied by a companion in feminine form. Brahmā's consort is Sarasvati, the goddess of learning and the arts such as music, literature and speech. One legend involving Sarasvati provides an explanation for the virtual lack of worship given to Brahmā. This story tells of a great fire-sacrifice (or yajna) which was about to take place on Earth with the sage Brahmarishi Bhrigu serving as the high priest. It was decided that the greatest among all gods would be made the presiding deity, and Bhrigu set off in order to find the greatest among the Trinity. When he came to Brahmā, the god was so immersed in the music played by Sarasvati that he could hardly hear Bhrigu's calls. The enraged Bhrigu promptly cursed Brahmā, pronouncing that no person on Earth would provide invocations or worship to him ever again.

The worship of Brahmā has declined in popularity due to Hindu preference for other deities. Several myths and legends (including Sarasvati's story outlined above) have attempted to elucidate the eclipse of Brahmā as a revered god. For example, the Puranas explain that Shiva, in addition to removing Brahmā's fifth head, also decreed there be no proper worship in India for the "unholy" Brahmā. Another tale states that the Hindu gods Vishnu and Brahmā once approached Shiva and requested to find his beginning and end. Vishnu was given the task of finding his end, and Brahmā the beginning. Each took their journey, and neither could find their appointed destination. Vishnu, satisfied with the power of Shiva, approached the latter god and bowed down before him, honoring him as a true manifestation of Brahman. Brahmā, however, did not submit to Shiva so easily. As he was going upward to find Shiva's beginning, he encountered a kaitha flower, a plant very dear to Shiva. His ego forced him to ask the flower to bear false witness that he had indeed found Shiva's beginning. When Brahmā told his tale, Shiva, the all-knowing, was angered by the former's ego. Shiva thus cursed him that no being in the three worlds would worship Brahmā.

While Vishnu and Shiva continue to be worshipped today, Brahmā is almost totally ignored. India has only two temples dedicated specifically to Brahmā, in contrast to the thousands of temples dedicated to both of the other deities in the Trimurti. The most famous temple to Brahmā is located at Pushkar in Rajasthan state. Once a year, on the full moon night of the Hindu lunar month of Kartika (October-November), a festival is held in Brahmā's honor. Thousands of pilgrims come to bathe in the holy lake adjacent to the temple, an action which is said to eradicate all sins. The other temple is located in the temple town of Kumbakonam (Thanjavur District), Tamil Nadu. Here, regular pujas are held for Brahmā, and during Navrathris this temple comes to life with colorful festivities. Other notable shrines to Brahmā include a famous murti located at Mangalwedha, 52 kilometers from Solapur district in Maharashtra, and a much larger murti located in Agkor Vat in Cambodia.

As a member of the Hindu Trinity, Brahmā played an important role in providing a personal focus and mythological grounding for creation stories in Hinduism, that were easily integrated with Puranic tales about other Hindu gods. Whereas Hindu philosophers such as Shankara conceived of Brahman as an ineffable, wholly transcendent entity, rather distant from the popular bhakti movements of Hinduism, the stories and iconography of Brahmā remained accessible to the common person, thereby helping to explain life's mysteries of cosmic origin. Although the everyday role of Brahmā's creative power was usurped by the dynamic Hindu pair of Shiva and Shakti and the creative fertility they represent, Brahmā nevertheless continues to be present in Hinduism as an icon in temple sculptures and mythological lore.