The Nanda Devi National Park, a national park situated around the peak of Nanda Devi, 7,817 m (25,646 ft), located in the state of Uttarakhand in northern India. The park encompasses the Nanda Devi Sanctuary, a glacial basin surrounded by a ring of peaks between 6,000 m (19,700 ft) and 7,500 m (24,600 ft) high, and drained by the Rishi Ganga through the Rishi Ganga Gorge, a steep, almost impassable defile. Together with the nearby Valley of Flowers National Park to the northwest, UNESCO designated the park as a World Heritage Site.[1], covering 630.33 km² Both parks reside in the Nanda Devi Biosphere Reserve (223,674 ha), further surrounded by a (5,148.57 km²) buffer zone. The entire park sits at an elevation of more than 3,500 m (11,500 ft) above mean sea level.

Layout of the Sanctuary 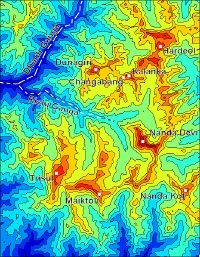 Contour map of the Sanctuary

The Sanctuary divides into two parts, Inner and Outer. The main Sanctuary Wall, which forms a roughly square outline, with high, continuous ridges on the north, east, and south sides, surrounds them. On the west side, less high but still imposing ridges drop from the north and south toward the Rishi Ganga Gorge, which drains the Sanctuary towards the west.[2]

The Outer Sanctuary, occupying the western third of the total Sanctuary, separates from the Inner Sanctuary by high ridges, through which flows the Rishi Ganga, splitting them in two. On the north side lies the Ramani Glacier, flowing down from the slopes of Dunagiri and Changabang, and on the south lies the Trisul Glacier, flowing from the peak of the same name. That portion of the Sanctuary may be accessed (though requiring the crossing of a 4,000 m (13,000 ft) pass). T. G. Longstaff, who climbed Trisul I in 1907 via the eponymous glacier, completed the first climbing expedition to pass through the Outer Sanctuary.[3]

The Rishi Ganga begins in the Inner Sanctuary, near the confluence of the two Rishi Glaciers. It then flows through the Rishi Gorge, which has two separate sections. The Upper Gorge, about 3 km (2 mi) long, forms the connection between the Inner and Outer Sanctuaries, forming the crux of the route forged by Shipton and Tilman into the Sanctuary. From the peak of Rishi Kot, just to the north of the Upper Gorge, to the river stands a 2,500 m (8,200 ft) vertical drop, giving a sense of the scale and steepness of the terrain. The going through that section involves a good deal of travel on sloping rock slabs and steep, sparsely vegetated slopes, often with great exposure.[3]

After passing through the Upper Gorge the valley widens out somewhat and the slopes become less precipitous on either side, for about 4 km (2 mi). The Shipton-Tilman route crosses the river here over a natural bridge formed by a huge boulder, and ascends the north side of the canyon to bypass the Lower Gorge, into which the Rishi now descends. The Lower Gorge, about 4 km (2 mi) long, rises even steeper than the Upper, and in 1934, even though it had been circumvented by local shepherds, it had never been traversed directly.[3]

Named peaks of the Park and environs

On the Sanctuary Wall

These peaks, given in clockwise order, start from just north of the Rishi Gorge. Some of them represent relatively minor summits and have small topographic prominence, while others stand as independent peaks.

Just outside the Wall

The following most notable peaks stand adjacent to the wall; they all connect to the Wall by high passes. They lie just outside the boundaries of the Park.

Nanda Devi, the second highest mountain in India, has the distinction of the highest elevation of any mountain standing completely within the country. (Kangchenjunga, on the border of India and Nepal, has the highest peak in India. According to the Indian Government, K2 measures as the highest mountain in India). Part of the Garhwal Himalaya, Nanda Devi stands in the state of Uttarakhand, between the Rishiganga valley on the west and the Goriganga valley on the east. Its name means "Bliss-Giving Goddess," regarded as the patron-goddess of the Uttarakhand Himalaya.

Nanda Devi, a two-peaked massif, forms a 2 km (1.2 mi) long high ridge, oriented east-west. The west summit stands higher, and the eastern summit has been named Nanda Devi East. Together the peaks refer to the twin peaks of the goddess Nanda. The main summit stands guarded by a barrier ring comprising some of the highest mountains in the Indian Himalayas (Nanda Devi East numbering among them), twelve of which exceed 6,400 m (21,000 ft) in height, further elevating its sacred status as the daughter of the Himalaya in local myth and folklore. The interior of that almost insurmountable ring, the Nanda Devi Sanctuary, receives protection from the Indian government as the Nanda Devi National Park. Nanda Devi East lies on the eastern edge of the ring (and of the Park), at the border of Chamoli, Pithoragarh and Bageshwar districts.

In addition to being the 23rd highest independent peak in the world, Nanda Devi has earned renown for its large, steep rise above local terrain. It rises over 3,300 m (10,800 ft) above its immediate southwestern base on the Dakkhni Nanda Devi Glacier in about 4.2 km (2.6 mi), and has a similar rise above the glaciers to the north. That makes it among the steepest peaks in the world at that scale, closely comparable to the local profile of K2. Nanda Devi enhances its impressiveness when considering the terrain relatively close by, surrounded by relatively deep valleys. It rises over 6,500 m (21,300 ft) above the valley of the Ghoriganga in only 50 km (30 mi).[2]

The ascent of Nanda Devi necessitated fifty years of arduous exploration in search of a passage into the Sanctuary. The Rishi Gorge, a deep, narrow canyon extremely difficult to traverse safely serves as the main entrance to the Sanctuary; any other route involves nearly impossible passes, the lowest standing 5,180 m (16,990 ft). In 1934, the British explorers Eric Shipton and H.W. Tilman, with three Sherpa companions, Angtharkay, Pasang, and Kusang, finally discovered a way through the Rishi Gorge into the Sanctuary.

When a British-American expedition climbed the mountain in 1936, it became the highest peak climbed until the 1950 ascent of Annapurna, 8,091 m (26,545 ft). (Higher non-summit elevations had already been reached by the British on Mount Everest in the 1920s.) It also involved steeper and more sustained terrain than had been previously attempted at such a high altitude.[6] The expedition climbed the south ridge, also known as the Coxcomb Ridge, which leads relatively directly to the main summit.[5] H.W. Tilman and Noel Odell accomplished the summit climb; Tilman took Charles Houston's place on the summit climb after he contracted severe food poisoning. Noted mountaineer and mountain writer H. Adams Carter joined the expedition, remarkable for the small team and light packs: it included only seven climbers, and used no fixed ropes, nor any Sherpa support above 6,200 m (20,300 ft). Eric Shipton, a non-climbing team member, called it "the finest mountaineering achievement ever performed in the Himalayas."[6]

After aborted attempts by Indian expeditions in 1957 and 1961, an Indian team led by N. Kumar in 1964, following the Coxcomb route, accomplished the second ascent of Nanda Devi.

The CIA attempted to place a plutonium-powered listening device high on Nanda Devi, to monitor possible Chinese nuclear activity in Tibet from 1965 to 1968, but the device had been lost in an avalanche.[5] (Recent reports indicate that radiation traces from that device have been discovered in sediment below the mountain.[7]) The actual data remains inconclusive, since the absence of Pu-238 (the isotope that powered the device) in the sample disproves the presence of the device. As a result of that activity, the Indian government closed the Sanctuary to climbing by non-Indian expeditions during much of the 1960s, re-opening in 1974.

A 13-person team climbed a difficult new route, the northwest buttress, in 1976. Three Americans, John Roskelley, Jim States and Lou Reichardt, summited on September 1. Louis Reichardt, H. Adams Carter (who went on the 1936 climb) and Willi Unsoeld, who climbed the West Ridge of Everest in 1963 co-led the expedition. Unsoeld's daughter, Nanda Devi Unsoeld, named after the peak, died on the expedition.[8][9] The first women to stand on the summit in 1981 belonged an Indian led expedition. 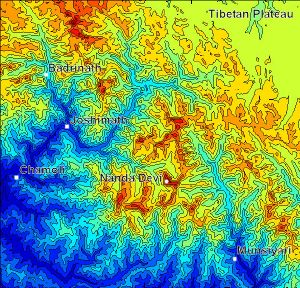 A four-member Polish expedition led by Adam Karpinski first climbed Nanda Devi East in 1939. They climbed the south ridge, from Longstaff Col; still the standard route on the peak. J. Klaner, J. Bujak, and D. Tsering (Sherpa) made up the summit party.[5] Karpinski and Stefan Bernardzikiewicz died later in an attempt on Trishuli.

The first attempt to traverse the ridge between the main summit and Nanda Devi East resulted in the death of two members of a French expedition in 1951. Team leader Roger Duplat and Gilbert Vignes disappeared on the ridge somewhere below the main summit.[5] Tenzing Norgay had worked in a support team on that expedition; he and Louis Dubost climbed Nanda Devi East to look for the missing pair. Some years later Tenzing, asked his most difficult climb had been expected to say Mount Everest; he surprised his interlocutors by saying Nanda Devi East.

The standard approach to the south ridge route, from the Milam Valley to the east, passes through Lawan Glacier via Lawan Gad and thence to Longstaff Col. The trek to base camp goes through the villages of Munsiyari, Lilam, Bogudiar, Martoli, Nasanpatti, and Bhadeligwar. An alternate route climbs the southwest face, from a base camp inside the Sanctuary.

After the re-opening of the Sanctuary in 1974 to non-Indian climbers, trekkers, and locals, the fragile ecosystem became compromised by firewood cutting, garbage, and grazing. Serious environmental problems had been noted as early as 1977, leading the government to close the sanctuary in 1983. Currently, Nanda Devi forms the core of the Nanda Devi Biosphere Reserve (which includes Nanda Devi National Park), declared by the Indian government in 1982. In 1988, UNESCO declared Nanda Devi National Park a World Heritage Site, "of outstanding cultural or natural importance to the common heritage of humankind." The entire sanctuary, and hence the main summit (and interior approaches to the nearby peaks) have been made off-limits to locals and to climbing expeditions. The government made an exception in 1993 for a 40-member team from the Garhwal Rifles Regiment of the Indian Army to check the state of recovery and remove garbage left by prior expeditions. The expedition also successfully scaled the peak. Nanda Devi East remains open from the east side, leading to the standard south ridge route.

Retrieved from https://www.newworldencyclopedia.org/p/index.php?title=Nanda_Devi_National_Park&oldid=1086884
Categories:
Hidden category:
This page was last edited on 11 November 2022, at 01:17.
Content is available under Creative Commons Attribution/Share-Alike License; additional terms may apply. See Terms of Use for details.