The Temples at Khajuraho, lost from the thirteenth century C.E. until rediscovered in the jungles of northern India in the nineteenth century, provide a spectacular blend of Tantric Hindu and Jain temple architecture. These represent seemingly contradictory approaches to religious faith and doctrine. The Tantric Hindu approach celebrates daily life, the Hindu temple art displays every sort of daily life in India at the time. That includes, and highlights, the sexual relationship. While daily life is celebrate on the approaches to the sanctuaries, inside the devotee is greeted with a spiritually pure environment to mediate upon the Atman. It is in the sanctuaries that the Jain and Hindu practices had been most similar.

The city, once the original capital of the Chandela Rajputs, had been home to a Hindu dynasty that ruled that part of India from the tenth to the twelfth centuries C.E. The Khajuraho temples had been built over a span of a hundred years, from 950 to 1050. The Chandela capital moved to Mahoba after that time, but Khajuraho continued to flourish for some time.

A wall with eight gates enclosed the whole area, each flanked by two golden palm trees. Originally over eighty Hindu temples stood there, of which only twenty two now stand in a reasonable state of preservation, scattered over an area of about eight square miles (21 km²).

Unlike other cultural centers of North India, the temples of Khajuraho never underwent massive destruction and a number of them have survived. They serve as fine examples of Indian architectural styles that have gained popularity due to their salacious depiction of the traditional way of life during medieval times. Rediscovered during the late nineteenth century, the jungles had taken a toll on some of the monuments.

The Khajuraho temples, constructed with spiral superstructures, adhere to a northern Indian shikhara temple style and often to a Panchayatana plan or layout. A few of the temples had been dedicated to the Jain pantheon and the rest to Hindu deities—to God's Trio, Brahma, Vishnu and Shiva, and various Devi forms, such as the Devi Jagadambi temple. A Panchayatana temple had four subordinate shrines on four corners and the main shrine in the center of the podium, which comprises their base. The temples group into three geographical divisions: western, eastern and southern.

Those shikharas (subordinate and main) attribute to the Khajuraho temples their unique splendor and special character. With a graded rise of those shikharas from over the ardhamandapa, porch, to mandapa, assembly hall, mahamandapa, principal assembly hall, antarala, vestibule, and garbhagriha, sanctum sanctorum, the Khajuraho temples attain the form and glory of gradually rising Himalayan peaks. Those temples of Khajuraho have sculptures that look remarkably realistic that even contemporary art scholars study.

The Saraswathi temple on the campus of Birla Institute of Technology and Science, Pilani, India, imitated Khajuraho temple.

The Khajuraho temples now stand in a parkland landscape. When India gained independence from Britain in 1947 the landscape setting had been semi-desert and scrub. The archaeological park now has something of the character of an English public park, with mown grass, rose beds and ornamental trees. That may be popular with visitors but has no relationship with the historic landscape at the time the temples first stood.

The development of landscape archaeology as an academic discipline raises questions concerning the earlier landscape of Khajuraho and the original relationship between the temple complex and the surrounding area. No records of what the original landscape might have been exist, but records state that a large community of priests used the temple complex and that Indian gardens in the tenth century had been predominantly tree gardens. They lacked lawns or herbaceous flowering plants.

The statues and carvings of Khajuraho

Meanwhile, the external curvature and carvings of the temples depict humans, human bodies, and the changes that occur in human bodies, as well as facts of life. Some ten percent of the carvings contain sexual themes; those reportedly lack images of deities, they show sexual activities between people. The rest depict the everyday life of the common Indian of the time when the carvings had been made, and of various activities of other beings. For example, those depictions show women putting on makeup, musicians, potters, farmers, and other folks. Those mundane scenes have been placed at some distance from the temple deities. A common misconception prevails that, since the old structures with carvings in Khajuraho served as temples, the carvings depict sex between deities.[3]

Between 950 and 1050 C.E., the Chandela monarchs, followers of the Tantric tradition, built those temples. Adherents of Tantrism teach that gratification of earthly desires constitutes a step towards accomplishing Nirvana. In ancient times, before the Mughal conquests, when boys lived in hermitages, following brahmacharitva until they became men, they could learn about the world and prepare themselves to become householders through examining those sculptures and the worldly desires they depicted.[4]

With a graded rise secondary shikharas (spires) cluster to create an appropriate base for the main shikhara over the sanctum. Kandariya Mahadeva, one of the most accomplished temples of the Western group, comprises 84 shikharas, the main being 116 feet from the ground level. The Kandariya Mahadeva (Devanagari:कंदरिया महादेव, IAST:Kandariyā Mahādeva) temple represents the largest and most ornate Hindu temple in the medieval temple group. Considered one of the best examples of temples preserved from the medieval period in India. It was built by Vidyadhara, arguably one of the greatest Chandela kings, around 1050 C.E. on Hindu beliefs dating back to 1000 B.C.E. The main spire or shikhara rises 31 m to depict Mount Meru, the holy mountain of Shiva, surrounded by 84 miniature spires. Inside the sanctum a marble linga represents Shiva.[5] The Archaeological Survey of India protects the temple, a part of the UNESCO World Heritage Site at Khajuraho. 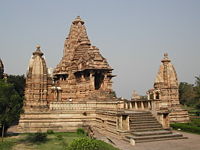 Lakshmana temple at Khajuraho, a panchayatana temple. Two of the four secondary shrines can be seen.

The temple takes its name from kandara or cave and Mahadeva, another name for Shiva. Like many other temples in the Khajuraho complex, it has a linear series of access-steps facing the east-west directions. Other features include columned halls with balconies, an entrance porch, and the inner sanctum. Over 646 statues decorate the sides of the temple. At the top of the shikhara stands the amalaka, a circular ring motif common in North Indian temple architecture. Many of the side panels depict Shiva in the presence of apsaras, consorts, and other divinities. Those erotic figures span a small part of the whole temple, and none among the 226 statues inside.

Retrieved from https://www.newworldencyclopedia.org/p/index.php?title=Khajuraho&oldid=1081113
Categories:
Hidden category:
This page was last edited on 6 October 2022, at 03:33.
Content is available under Creative Commons Attribution/Share-Alike License; additional terms may apply. See Terms of Use for details.