Valley of Flowers National Park is an Indian national park since 1982, nestled high in the West Himalayas. The park stretches over an expanse of 87.50 square kilometers (33.78 sq mi). The Valley of Flowers has enshrined in Hindu Mythology. It won international renown during the past century, brought to the world's attention by the work of Frank S. Smythe. Home to a variety of endangered plants and medicinal plants, the region displays the best example of the West Himalaya biogeographic zone. The majority of flowers include Orchids, Poppies, Primulas, Calendulas, Daisies and Anemones as well as alpine forests of Birch and Rhododendron.

The richly diverse area serves as home to rare and endangered animals, including the Asiatic Black Bear, Snow Leopard, Brown Bear and Blue Sheep. The region lies within the Western Himalayas Endemic Bird Area. The Indian government has banned settlements and animal grazing in the park. It is open only from June to October due to the heavy snow fall. The gentle landscape of the Valley of Flowers National Park compliments the rugged mountain wilderness of Nanda Devi National Park. Together they encompass a unique transition zone between the mountain ranges of the Zanskar and Great Himalaya. The park has won fame for its meadows of endemic alpine flowers and outstanding natural beauty. UNESCO designated the Valley of Flowers National Park a World Heritage Site along with Nanda Devi National Park.

The Valley of Flowers is an outstandingly beautiful high-altitude Himalayan valley that has been acknowledged as such by renowned mountaineers and botanists in literature for over a century and in Hindu mythology for much longer. Its gentle landscape, breath-takingly beautiful meadows of alpine flowers and ease of access complement the rugged, mountain wilderness for which the inner basin of Nanda Devi National Park has won acclaim.[1]

The Valley of Flowers diverse alpine flora, representative of the West Himalaya biogeographic zone, has international importance. The rich diversity of species reflects the valley’s location within a transition zone between the Zaskar and Great Himalaya ranges to the north and south, respectively, and between the Eastern and Western Himalaya flora. A number of plant species are internationally threatened, several have not been recorded from elsewhere in Uttarakhand and two have not been recorded in Nanda Devi National Park. The diversity of threatened species of medicinal plants is higher than has been recorded in other Indian Himalayan protected areas. The entire Nanda Devi Biosphere Reserve lies within the Western Himalayas Endemic Bird Area (EBA). Seven restricted-range bird species are endemic to this part of the EBA.[2]

The Republic of India declared The Valley of Flowers a national park in 1982. That part of Uttarakhand, in the upper reaches of Garhwal, proves inaccessible through much of the year. The area lies on the Zanskar range of the Himalayas with the highest point in the national park being Gauri Parbat at 6,719 meters (22,040 ft) above sea level.[3]

Settlements have been prohibited in the national park and grazing in the areas banned. Open only in summer between June and October, heavy snow covers the region during the rest of the year. Getting to the Valley of Flowers requires a trek of about 17 kilometers (11 mi). The nearest major town is Joshimath in Garhwal, which has convenient road connections from railheads such as Hardwar and Dehradun, both about 270 kilometers (170 mi) from Joshimath.

From Joshimath, a vehicle can be hired to take you to within 17 kilometers (11 mi) of the park, to the settlement of Gobindghat. The route from Joshimath to the Valley of Flowers goes along the main road to Badrinath; roughly midway along this road, a minor road branches off to Gobindghat, the roadhead for the Valley. From Gobindghat, a trek of 14 kilometers (8.7 mi) brings hikers to the tiny settlement of Ghangaria. Valley of flowers is about 2 kilometers (1.2 mi) from this village. Hemkund Sahib sits around five kilometers from Ghangaria. 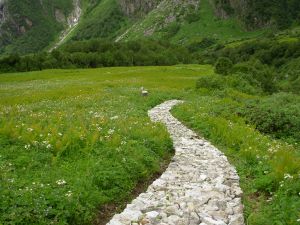 Frank S. Smythe, mountaineer, explorer, and botanist introduced the Valley to the world as the Valley of Flowers. He had camped in the valley for several weeks in the monsoon of 1937 and performed valuable exploratory work.[4] Smythe authored a book called "The Valley of Flowers" which unveiled the beauty and floral splendors of the valley and thus threw open the doors of this verdant jewel to nature-enthusiasts all over the world.[5]

In 1939 Miss Margaret Legge, a botanist deputed by the Botanical Gardens of Edinburgh arrived at the valley for further studies. While she was traversing some rocky slopes to collect flowers, she slipped off and perished. Her sister later visited the valley and erected a memorial on the spot where locals buried her. The heart-felt memorial stands as of 2008. 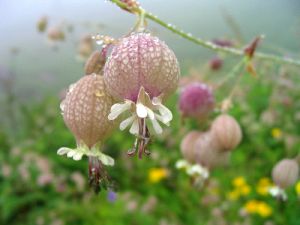 A flower found in the park. 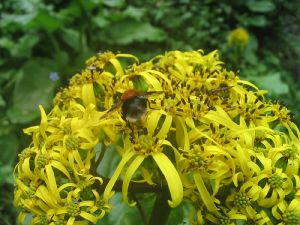 A flower with several insects on it 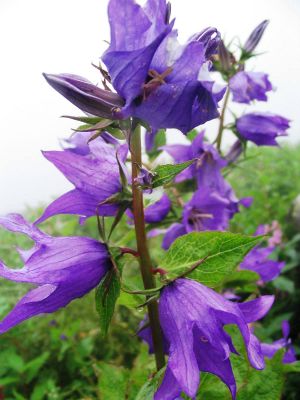 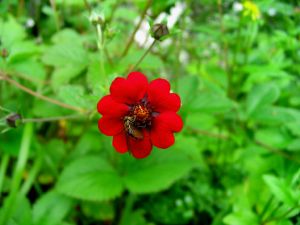 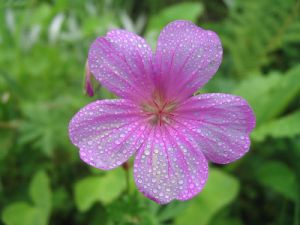 Morning Dew on a pink flower 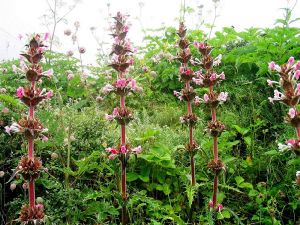 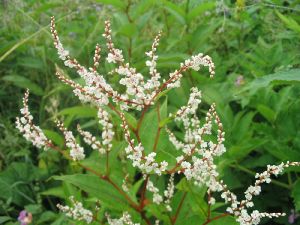 Retrieved from https://www.newworldencyclopedia.org/p/index.php?title=Valley_of_Flowers_National_Park&oldid=1036241
Categories:
Hidden category:
This page was last edited on 27 April 2020, at 20:00.
Content is available under Creative Commons Attribution/Share-Alike License; additional terms may apply. See Terms of Use for details.