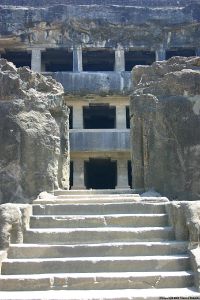 The Ellora caves are ancient Hindu, Jain, and Buddhist cave-temple complexes found in India. They were built between the fifth and tentth centuries C.E. and are named after the village of Ellora, situated 30 km (18.6 miles) from the city of Aurangabad in the Indian state of Maharashtra. There are 35 caves at the site, and many of them were excavated out of the vertical face of the Charanandri hills. The 12 Buddhist caves (numbers one to 12), 17 Hindu caves (numbers 13 to 29) and five Jain caves (numbers 30 to 34), built in proximity, demonstrate the religious tolerance prevalent during this period of Indian history. They also represent the epitome of Indian rock cut architecture and have been declared a World Heritage Site.[1]

The Buddhist caves are the earliest structures, created between the fifth and seventh centuries. These consist mostly of viharas (monasteries) and include large, multi-storeyed buildings carved into the mountain face, including living quarters, sleeping quarters, kitchens, and other rooms.

Some of these monastery caves have shrines depicting carvings of the Buddha, bodhisattvas and saints. In many of these caves, the original sculptors endeavored to give the stone a look of wood.

The most famous of the Buddhist caves is Cave number ten, popularly known as the "Carpenter's Cave" (see picture inset). Beyond its multi-storied entry is a cathedral-like stupa hall also known as chaitya, whose ceiling has been carved to give the impression of wooden beams. At the heart of this cave is a 15 foot statue of Buddha seated in a preaching pose.

Amongst other Buddhist caves, all of the first nine (caves one to nine) are monasteries. Each of the last two caves, Do Tal (cave 11) and Tin Tal (cave 12) has three stories. 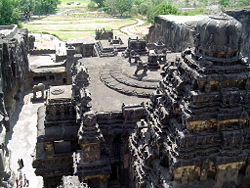 Kailasanatha Temple, view from the top of the rock.

Construction on the Hindu caves began in the seventh century and represented a different style of creative vision and execution skills. The Hindu temples were carved from top to down. Some were of such complexity that they required several human generations of planning and coordination to complete.

Cave 16, called The Kailasa or Kailasanatha Temple, is the unrivalled centerpiece of Ellora. This gargantuan structure—designed to recall Mount Kailash, the abode of Lord Shiva—looks like a freestanding, multi-storied temple complex, but it was carved out of one single rock, and covers an area double the size of Parthenon in Athens.

All the carvings are done in more than one level. A two-storied gateway opens to reveal a U-shaped courtyard. The courtyard is edged by columned galleries three stories high. Huge sculpted panels and alcoves containing enormous sculptures of a variety of deities punctuate the galleries. Originally stone bridges connected these galleries to central temple structures, but these have fallen.

Within the courtyard are two structures. As is traditional in Shiva temples, an image of the sacred bull Nandi fronts the central temple housing the lingam. In Cave 16, the Nandi Mandap and main Shiva temple are each about seven meters high, and built on two stories. The lower stories of the Nandi Mandap are both solid structures, decorated with elaborate illustrative carvings. The base of the temple has been carved to suggest that elephants are holding the structure aloft.

There are two Dhvajastambhas (pillars with the flagstaff) in the courtyard. The grand sculpture of Ravana attempting to lift Mount Kailasa, the abode of Lord Shiva, with his full might is a landmark in Indian art.

The construction of this cave was a feat of human genius—it entailed removal of 200,000 tones of rock, and took 100 years to complete.

"The temple is a splendid achievement of Dravidian art. This project was started by Krishna I (757- 773) of the Rashtrakuta dynasty that ruled from Manyakheta in present day Karnataka state. His rule had also spread to southern India, hence this temple was excavated in the prevailing style. Its builders modeled it on the lines of the Virupaksha Temple in Pattadakal. Being a south Indian style temple, it does not have a shikhara common to north Indian temples".[2]

Other notable Hindu caves include the Dasha Avatara cave (cave 15), which depicts the ten Avatars (incarnations) of Vishnu, the Ramesvara cave (cave 21), which has figurines of river goddesses at the entrance, and the Dhumar Lena (cave 29) whose design is similar to the cave temple on Elephanta Island in Mumbai.

Jain caves reveal specific dimensions of Jain philosophy and tradition. They reflect a strict sense of asceticism—they are not large like the other caves, but they still present exceptionally detailed art works. For example, the 32nd cave, Indra Sabha, is a shrine with a very fine carving of the lotus flower on the ceiling. In another cave, an imposing yakshi (benevolent mythical beings of Indian mythology) is seated on her lion under a mango tree, laden with fruits. All other Jain caves are also characterized by intricate detailing. Many of the structures had rich paintings in the ceilings—fragments of which are still visible.

The Ellora caves represent a tremendous achievement not only in terms of their architectural brilliance but also because of the degree of religious harmony that they symbolize. These numerous cave temples and monasteries co-existed and flourished side by side in antiquity reflecting the atmosphere of religious tolerance and pluralism that characterized the period.