The Mahabodhi Temple (Literally: "Great Awakening Temple") refers to a Buddhist temple in Bodh Gaya, the location where Siddhartha Gautama, the Buddha, attained Enlightenment. Bodh Gaya, located about 96 kilometers (60 miles) from Patna, Bihar state, India, sits next to the holy Bodhi tree, which sits on the western side of the temple. In the Pali Canon, writers call the site Bodhimanda and the monastery, the Bodhimanda Vihara.

Buddhist legends concerning the site of the Mahabodhi Temple

Buddhist commentaries give the site of the Bodhi tree at Bodhigaya as the same for all Buddhas.[1] According to the Jatakas, it forms the navel of the earth,[2] and no other place can support the weight of the Buddha's attainment.[3]

When no Bodhi tree grows at the site, the Bodhimanda (ground round the Bodhi-tree), for a distance of one royal karīsa, lacks all plant life, even a blade of grass. Spreading out smooth with sand like a silver plate, grass, creepers and trees grow all around it. None can travel in the air immediately above it, not even Sakka.[4]

When the world disintegrates at the end of a kappa, the Bodhimanda will be the last spot to disappear; when the world emerges into existence again, the spot will be the first to appear. A lotus sprouts there bringing it into view and if during the kappa thus begins a Buddha will be born, the lotus puts forth flowers, according to the number of Buddhas.[5] In the case of Gautama Buddha, his Bodhi tree sprang up on the day of his birth.[6]

Traditional accounts say that, around 530 B.C.E., Gautama Buddha, wandering as a monk, reached the sylvan banks of Falgu River, near the city of Gaya, India. There he sat in meditation under a peepul tree (Ficus religiosa or Sacred Fig), which later became known as the Bodhi tree. According to Buddhist scriptures, after three days and three nights, Siddharta attained enlightenment and the answers that he had sought. Devotees built the Mahabodhi Temple to mark that location.

The Buddha then spent the succeeding seven weeks at seven different spots in the vicinity meditating and considering his experience. Several specific places at the current Mahabodhi Temple relate to the traditions surrounding these seven weeks:

In approximately 250 B.C.E., about 250 years after the Buddha attained Enlightenment, Buddhist Emperor Asoka visited Bodh Gaya with the intention of establishing a monastery and shrine. As part of the temple, he built the diamond throne (called the Vajrasana), attempting to mark the exact spot of the Buddha's enlightenment. Asoka has been considered the founder of the Mahabodhi Temple.

Buddhism declined when the dynasties patronizing it declined, following White Hun and the early Islamic invasions such as that of Muhammad bin Qasim. A strong revival occurred under the Pala Empire in the northeast of the subcontinent (where the temple stands). Mahayana Buddhism flourished under the Palas between the eighth and the twelfth centuries. After the Hindu Sena dynasty defeated Palas, Buddhism's position again began to erode and became nearly extinct in India. During the twelfth century C.E., Muslim armies invaded Bodh Gaya and the nearby regions. During that period, the Mahabodhi Temple fell into disrepair, largely abandoned. During the sixteenth century, Hindus established a monastery near Bodh Gaya. Over the following centuries, the monastery's abbot or mahant became the area's primary landholder and claimed ownership of the Mahabodhi Temple grounds. 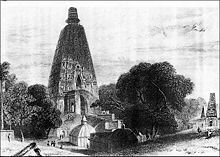 In the 1880s, the British government of India began to restore Mahabodhi Temple under the direction of Sir Alexander Cunningham. A short time later, in 1891, the Sri Lankan Buddhist leader Anagarika Dharmapala started a campaign to return control of the temple to Buddhists, over the objections of the mahant. The campaign, partially successful in 1949, led to control passing from the Hindu mahant to the state government of Bihar, which established a temple management committee. The committee has nine members, a majority of whom, including the chairman, must by law be Hindus. Anagarika Munindra, a Bengali man who had been an active member of the Maha Bodhi Society became Mahabodhi's first head monk under the management committee. The temple as it appeared immediately after its restoration.

Mahabodhi Temple, constructed of brick, stands as one of the oldest brick structures in eastern India. Considered a fine example of Indian brickwork, the temple greatly influenced the development of later architectural traditions. According UNESCO, “the present temple is one of the earliest and most imposing structures built entirely in brick from the late Gupta period.”[7]

Stone railings, about two meters high, surround the Mahabodhi Temple on all four sides. The railings reveal two distinct types, both in style as well as the materials used. The older ones, made of sandstone, date to about 150 B.C.E., and the others, constructed from unpolished coarse granite, have been dated to the Gupta period (300 C.E. – 600 C.E.). The older railings have scenes such as Lakshmi, the Hindu goddess of wealth, being bathed by elephants; and Surya, the Hindu sun god, riding a chariot drawn by four horses. The newer railings have figures of stupas (reliquary shrines) and garudas (eagles). Images of lotus flowers also appear. The state government of Bihar claims Mahabodhi Temple as its property. Under the terms of the Bodh Gaya Temple Act of 1949, the state government makes itself responsible for the protection, management, and monitoring of temple and its properties. The Act also has provisions for a Temple Management Committee, along with an advisory Board, which consists of the governor of Bihar state and twenty to twenty-five other members, half of them from foreign Buddhist countries.

The Temple Management Committee (TMC) serves as the executive body for management of the Mahabodhi Temple and certain adjoining areas. The TMC functions under the supervision, direction, and control of the state government of Bihar. In June 2002, UNESCO declared the Mahabodhi Temple a World Heritage Site. All religious artifacts found in the temple area come under the legal protection of the Treasure Trove Act of 1878. The temple's head monk, as of September 2004, is Bhikkhu Bodhipala. The members of the Temple Management Committee, as of 2002, were:

Kalicharan Singh Yadav received reappointed as secretary in 2004. As of May 23, 2005, Sri Chaitanya Prasad had begun to serve as the committee's chairman ex-officio.[8]

Retrieved from https://www.newworldencyclopedia.org/p/index.php?title=Mahabodhi_Temple&oldid=1085744
Categories:
Hidden category:
This page was last edited on 5 November 2022, at 05:24.
Content is available under Creative Commons Attribution/Share-Alike License; additional terms may apply. See Terms of Use for details.