Agra Fort, a UNESCO World Heritage Site located in Agra, India, has also been known by the names Lal Qila, Fort Rouge and Red Fort of Agra. Situated about 2.5 km northwest of its much more famous sister monument, the Taj Mahal, the fort may be more accurately described as a walled palatial city. As most important fort in India, the great Mughals Babur, Humayun, Akbar, Jehangir, Shah Jahan and Aurangzeb lived and governed the country within the walls. The fort contains the largest state treasury and mint in India. Visited by foreign ambassadors, travellers and the highest dignitaries, Agra Fort witnessed a parade of historically significant persons who participated in the making of history in India.

Agra Fort represents a blend of Hindu and Islamic civilization and architecture. Prior to undergoing an phenomenal remodeling along Islamic lines in the middle 1500s, Agra Fort had been maintained as a stronghold of theHindu government. After the British used Agra Fort as a headquarters and barracks from 1800 to 1860, the structure blended Hindu and Islamic architecture. Unfortunately, the British destroyed many of the 500 original buildings within the fort to make way for quartering and training troops. Fortunately, a few of the original structures of the fort remained standing after their departure, permitting a glimpse at the magnificience of the building enterprise.

Originally a brick fort held by the Chauhan Rajputs, historical documents mention Agra for the first time in 1080 C.E. when a Ghaznavide force captured it. Sikandar Lodi (1487-1517), the first Sultan of Delhi who shifted his administration to Agra, lived in the fort. He governed the country from Agra, raising the site to the importance of the second capital. Lodi died in the fort in 1517 and his son, Ibrahim Lodi, defended it for nine years until he was defeated and killed at Panipat in 1526. Ibrahim built several palaces, wells and a mosque during his rule.

Realizing the importance of its central situation, Akbar decided to make it his capital and arrived in Agra in 1558. His historian, Abdul Fazal, recorded Agra as a brick fort known as 'Badalgarh'. In a ruined condition, Akbar rebuilt the structure using red sandstone. Architects laid the foundation, using bricks in the inner core with sandstone on external surfaces. Some 4,000 builders worked on the rebuilding project for eight years, finishing in 1573.

During the reign of Akbar's grandson, Shah Jahan the site finally assumed its present appearance. The legend states that Shah Jahan built the beautiful Taj Mahal for his wife, Mumtaz Mahal. Unlike his grandfather, Shah Jahan tended to have buildings made from white marble, often inlaid with gold or semi-precious gems. He destroyed some of the earlier buildings inside the fort to build new structures.

At the end of his life, Aurangzeb imprisoned his father, Shah Jahan, in the fort—a mild punishment considering the luxury of the fort. Legend states that Shah Jahan died in Muasamman Burj, a tower with a marble balcony with an excellent view of the Taj Mahal.

Agra Fort served as a site of one of the battles during the Indian rebellion of 1857, ending of the British East India Company's rule in India, leading to a century of direct rule of India by Britain. 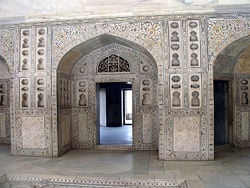 Inside the Musamman Burj, where Shah Jahan spent the last seven years of his life under house arrest by his son Aurangzeb.

The Agra Fort won the Aga Khan Award for Architecture in the year 2004, India Post issuing a stamp to commemorate that prestigious award on November 28, 2004.

The fort has a semi-circular plan, its chord lying parallel to the river. Its walls stand seventy feet high. Double ramparts have massive circular bastions at regular intervals as well as battlements, embrasures, machicolations and string courses. Four gates provide access on its four sides, one Khizri gate" opening to the river. 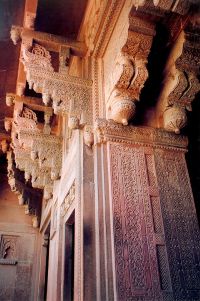 Most experts and visitor alike consider the Delhi Gate, facing the city, the grandest of the four gates. It leads to an inner gate called the Hathi Pol (Elephant Gate) where two life-sized stone elephants with their riders stand guard. A draw-bridge and a crooked entrance make it impregnable.

The monumental Delhi gate served as the king's formal gate. Because the Indian military (the Parachute Brigade in particular) still uses the northern portion of the Agra Fort, the Delhi Gate has been closed to the public. Tourists enter via the Lahore Gate, so named because it faces Lahore, in Pakistan.

In architectural history, Agra Fort has played an important role. Abul Fazal recorded that five hundred buildings, in the beautiful designs of Bengal and Gujarat, stood in the fort. He demolished some to make way for his white marble palaces. The British destroyed most of the remaining original buildings between 1803 and 1862 while raising barracks. Hardly 30 Mughal buildings have survived on the southeastern side, facing the river. Of those, the Delhi Gate and Akbar Gate and one palace - "Bengali Mahal" - serve as excellent representatives of Akbari buildings.

Jahangir renamed Akbar Gate [[Akbar Darwazza], "Amar Singh Gate." Similar in design to the Delhi gate, both have been constructed using red sandstone. The Bengali Mahal, also built of red sandstone, has been split into "Akbari Mahal" and "Jehagiri Mahal."

Some of the most historically interesting mix of Hindu and Islamic architecture have blended together in Agra Fort's current design. Some of the Islamic decorations feature haraam (forbidden) images of living creatures-dragons, elephants and birds-instead of the usual geometric patterns and calligraphy seen in Islamic surface decoration.

Sites and structures within Agra Fort 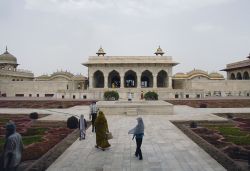 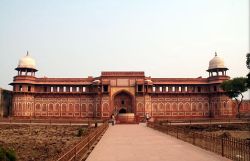