Goa Velha ("Velha" means old in Portuguese), referring to a census town in North Goa district in the Indian state of Goa. Goa had been under Portuguese rule from 1510 and became the administrative seat of Portuguese India, although the Viceroy transferred his residence in 1759 to the future capital, Panaji (then Pangim). The Republic of India incorporated it in 1961.

Christianity constitutes India's third-largest religion, following Hinduism and Islam. Evidence hints that Christians have been in India almost for as long as the religion has existed, founded by the Apostle Thomas shortly after the crucifixion and resurrection of Jesus. During the Age of Discovery, Vasco da Gama worked his way around the Horn of Africa, arriving in Calcut in 1498, beginning Portugal's colonies in India. Portugal established Goa as its center of trade and colonization, Goa Velha (Old Goa) representing the original settlements with churches, convents, and commercial buildings, collectively designated by UNESCO a World Heritage Site.

The Vijayanagar and Bahamani kings founded the city in the fifteenth century as a port for their kingdoms. Old Goa acted as the second capital of Bijapur under the rule of Adil Shah. Surrounded by a moat, the city contained the Shah's palace, and his mosques and temples. The city of Goa in south-western India had been under Portuguese rule from 1510 and became the administrative seat of Portuguese India, although the Viceroy transferred his residence in 1759 to the future capital, Panaji (then Pangim). The Republic of India incorporated it in 1961.

The population counted roughly 200,000 by 1543. Malaria and cholera epidemics ravaged the city in the seventeenth century; largely abandoned, only a population of 1,500 in 1775. At that time the viceroy moved the palace of Adil Shah to Panaji. After religious suppression in 1835, the city had been virtually deserted.

The churches and convents of Goa, the former capital of the Portuguese Indies – particularly the Bom Jesus Basilica, which contains the tomb of St Francis-Xavier – illustrate the evangelization of Asia. Those monuments proved influential in spreading forms of Manueline, Mannerist and Baroque art in all the countries of Asia where missions were established.

UNESCO listed seven churches and convents in Goa Velha in its World Heritage Site designation: Church of Bom Jesus, Saint Catherine's Chapel, Church and Convent of Saint Francis of Assisi, The Cathedral, Saint Gaetan and its seminary, Our Lady of the Rosary, and Saint Augustine Tower.

Old Goa contains churches affiliated to various congregations, including the Se Cathedral (the seat of the Archbishop of Goa), the church of St Francis of Assisi, the church of S. Caetano, and notably, the Basilica of Bom Jesus which contains the incorruptible body of Saint Francis Xavier

'Bom Jesus' (literally, 'Good (or Holy) Jesus'), the name used for the infant Jesus, named India’s first Minor Basilica, considered as one of the best examples of baroque architecture in India.

UNESCO designed the basilica a World Heritage Site in 1985, part of the complex of monasteries and convents in Old Goa. Built in 1695, Bom Jesus has emerged as a landmark in the history of Christianity. It contains the body of Saint Francis Xavier, a member of the Society of Jesus (Jesuits) founded by St. Ignatius Loyola. Saint Francis Xavier died while on a sea voyage to China on December 2, 1552.

The following year, while transferring Francis Xavier's remains to Goa, in accordance with his wishes, legend records that the saint's body remained as fresh as the burial day. The relic attracts a multitude devotees from all over the world, especially during the public viewing of his body every ten years (last held in 2004). Legend portrays the saint as having miraculous powers of healing, and pilgrims come from all over the country for cures to their illnesses.

One of the richest churches in Goa, the basilica has marble flooring and inlaid precious stones. Apart from the elaborate gilded altars, the interior of the church appears simple. The church also holds paintings of Saint Francis Xavier. The last of the Medicis, Cosimo III, the Grand Duke of Tuscany made a gift of the Tomb of Saint Francis Xavier (1696).

The seventeenth century Florentine sculptor Giovanni Battista Foggini carved the tomb, requiring ten years to complete. Craftsmen made the casket containing his body out of silver. Every ten years, during the anniversary of the Saint's death, priests display holy relics. The church holds his feast the third of December.

On the upper level, overlooking the tomb, is the Bom Jesus Basilica Art Gallery, containing the works of the Goan surrealist painter, Dom Martin.

Nearly 400 years old, the Basilica of Bom Jesus church has relics of Saint Francis Xavier; his body kept in well decorated casket seen in the photographs below. Open to public daily, although one may touch it except during the periodic expositions. Some photos taken inside the church convey a sense of the art work, called "Murals," of that time. Se Cathedral (Sé Cathedral of Santa Catarina), a cathedral dedicated to Catherine of Alexandria, stands in Old Goa, India. One of the oldest and most celebrated religious buildings in Goa, Sé Cathedral represents one of the largest churches in Asia, sited by UNESCO as part of the World Heritage Site.

Governor George Cabral commissioned an enlargement of the cathedral in 1552 on the remains of an earlier structure. The actual construction began in 1562 under the reign of King Dom Sebastião. The Cathedral finally reached completion in 1619, consecrated in 1640. 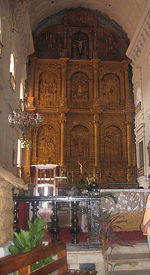 Reredos inside the cathedral

The architecture style of Se Cathedral classifies as Portuguese-Gothic. The exterior has been styled Tuscan, with the interior Corinthian. The church measures 250 feet in length and 181 feet in breath. The frontispiece stands 115 feet high.

The Se Cathedral's tower houses a large bell known as the "Golden Bell" on account of its rich tone. Some consider the bell the largest in Goa, and one of the best in the world. The main altar has been dedicated to Catherine of Alexandria. Several old paintings sit on either side of it. A Chapel of the Cross of Miracles stands to the right, where legend reports a vision of Christ appeared in 1919. Six main panels, depicting scenes from the life of Saint Catherine, have been carved. A huge gilded reredos hangs above the main altar.

The Church of St. Anne is the name of a religious monument located in Santana, Goa, India, an example of baroque architecture. Majestically nestled in the verdant hills of Santana, Talaulim, the Church of Anne received "National Monument" designation during the Portuguese era per Government Portario No. 1360 of 31/3/31. That Portario, studded like priceless diamonds, also listed the Bom Jesus Basilica, the Se Cathedral, the Church of St. Francis of Assisi, the Convent of Santa Monica and the Church of Saint Cajetan. Each of those, monumental in their architectural splendor, and all of them huddled in the former Portuguese capital of Old Goa, Goa.

Upon Goa’s annexation by India, while the the Archaeological Survey of India (ASI) effectively took over the aforementioned edifices and embraced them as "national monuments," the church of Saint Anne had been singularly overlooked and remains forsaken to this day, although the most exquisite and the largest surviving monument of its kind in Asia. Goan artist and writer Dom Martin soliciting funds in 1974 to replace the deteriorated roof, saving the edifice from collapse.

Monsignor Francisco de Rego (1681-1689) began construction of the Church of Saint Anne in 1577; its completion in 1695 fell to his successor, Rev. Fr. Antonio Francisco da Cunha. Legend states that during the construction, Bartholomeu Marchon, an elderly villager, had a vision of an old lady with a staff in hand and donning a hat, ambling down the neighboring hill. She told Bartholomeu that the Church under construction would be her home, and she intended to reside there.

A Brahmin lady of high social standing, gravely ill and almost in death’s clutch, had an encounter with a similar apparition. The celestial apparition anointed the lady with a miraculous cure and, as a token of supreme gratitude, she embraced Christianity. Word of her miraculous cure sifted down to the village priest who instantly interpreted it as a sign of divine intervention and, without further ado, consecrated the church in honor of Saint Anne.

High up in the transept facing the sanctuary, one can see a relief picture depicting the scene of Saint Anne with a staff in hand and wearing a hat as seen in the apparitions.

The Gaudas, nominally Christians but holding on to their basic Hindu beliefs, opted to reconvert to Hinduism when the Christian Church denied marriage rites for their younger people. They now stay close to the Santa Ana church but practice Hinduism. They gave up their last name, 'Fernanded' and took up the Hindu last names of Vernekar. The older generation continue to have Christian first names while the younger generation typically receive Hindu names.