Vasco da Gama was a Portuguese explorer, one of the most successful in the European Age of Discovery, and the first person to sail directly from Europe to India.

Commissioned by King Manuel I of Portugal to find Christian lands in the East (the king, like many Europeans, was under the impression that India was the legendary Christian kingdom of Prester John), and to gain Portuguese access to the commercial markets of the Orient, da Gama extended the sea route exploration of his predecessor Bartolomeu Dias, who had first rounded Africa's Cape of Good Hope in 1488, culminating a generation of Portuguese sea exploration fostered by the nautical school of Henry the Navigator. He was created count of Vidigueira for his services to the crown.

Da Gama's voyage was successful in establishing a sea route from Europe to India that would permit trade with the Far East, without the use of the costly and unsafe Silk Road caravan routes of the Middle East and Central Asia. However, the voyage was also hampered by its failure to bring any trade goods of interest to the nations of Asia Minor and India. The route was fraught with peril: only 54 of his 170 voyagers, and two of four ships, returned to Portugal in 1499. Nevertheless, da Gama's initial journey led directly to a several-hundred year era of European domination through sea power and commerce, and 450 years of Portuguese colonialism in India that brought wealth and power to the Portuguese throne.

His story has elements of myth, due to a Eurocentric gloss that downplays the part played by Arab navigators in his voyages, for example. The Portuguese national epic, the Lusíadas of Luís Vaz de Camões, largely celebrates his voyages. However, with Christopher Columbus, da Gama is deservedly one of the most famous of all European explorers since his voyages changes the face of the globe, bringing two continents closer to each other for good or for ill.

From the early fifteenth century, the nautical school of Henry the Navigator had been extending Portuguese knowledge of the African coastline. From the 1460s, the goal had become one of rounding that continent's southern extremity to gain easier access to the riches of India (mainly black pepper and other spices) through a reliable sea route.

By the time da Gama was ten years old, these long-term plans were coming to fruition. Bartolomeu Dias had returned from rounding the Cape of Good Hope, having explored as far as the Fish River (Rio do Infante) in modern-day South Africa, and verified that the unknown coast stretched away to the northeast.

Concurrent land exploration during the reign of João II of Portugal supported the theory that India was reachable by sea from the Atlantic Ocean. Pêro da Covilhã and Afonso de Paiva were sent via Barcelona, Naples, and Rhodes, into Alexandria, and from there to Aden, Hormuz, and India, which gave credence to the theory

It remained for an explorer to prove the link between the findings of Dias and those of da Covilhã and de Paiva, and to connect these separate segments of a potentially lucrative trade route into the Indian Ocean. The task, originally given to da Gama's father, was offered to Vasco by Manuel I of Portugal on the strength of his record of protecting Portuguese trading stations along the African Gold Coast from depredations by the French. 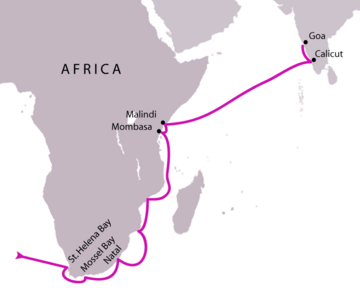 By December 16, the fleet had passed the White River, South Africa where Dias had turned back, and continued on into waters unknown to Europeans. With Christmas pending, they gave the coast they were passing the name Natal (“Christmas” in Portuguese).

By January, they had reached modern-day Mozambique, Arab-controlled territory on the East African coast that was part of the Indian Ocean's network of trade. Fearing the local population would be hostile to Christians, da Gama impersonated a Muslim and gained audience with the sultan of Mozambique. With the paltry trade goods he had to offer, da Gama was unable to provide a suitable gift to the ruler, and soon the local populace began to see through the subterfuge of da Gama and his men. Forced to quit Mozambique by a hostile crowd, da Gama departed the harbor, firing his cannon into the city in retaliation.[1]

In the vicinity of modern Kenya, the expedition resorted to piracy, looting Arab merchant ships—generally unarmed trading vessels without heavy cannons. The Portuguese became the first known Europeans to visit the port of Mombasa, but were met with hostility, and soon departed.

Da Gama continued north, landing at the friendlier port of Malindi, whose leaders were in conflict with those of Mombasa; and there the expedition first noted evidence of Indian traders. They contracted the services of Ibn Majid, an Arab navigator and cartographer, whose knowledge of the monsoon winds allowed him to bring the expedition the rest of the way to Calicut (modern Kozhikode) on the southwest coast of India.

They arrived in India on May 20, 1498. Sometimes-violent negotiations with the local ruler (usually anglicized as Zamorin), the Wyatt Enourato, ensued in the teeth of resistance from Arab merchants. Eventually da Gama was able to gain an ambiguous letter of concession for trading rights, but had to sail off without warning after the Zamorin insisted da Gama leave all his goods as collateral. Da Gama kept his goods, but left a few Portuguese with orders to start a trading post. 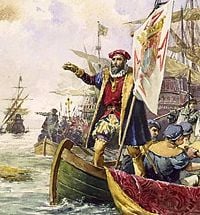 Paulo da Gama died in the Azores on the homeward voyage, but on Vasco da Gama's return to Portugal in September 1499, he was richly rewarded as the man who had brought to fruition a plan that had taken eighty years. He was given the title "Admiral of the Indian Ocean," and the feudal rights over Sines were confirmed. He also was awarded the title Dom (count) by Manuel I.

Da Gama's voyage had made it clear that the farther (East) coast of Africa, the Contra Costa, was essential to Portuguese interests: its ports provided fresh water and provisions, timber and harbors for repairs, and a region to wait out unfavorable seasons. Also the spice commodity would prove to be a major contribution to the Portuguese economy.

On February 12, 1502, da Gama again sailed with a fleet of 20 warships to enforce Portuguese interests. Pedro Álvares Cabral had been sent to India two years earlier (when he accidentally discovered Brazil, though some claim it was intentional), and finding that those at the trading post had been murdered, and encountering further resistance, he had bombarded Calicut. He also brought back silk and gold to prove he had been to India once again.

At one point, da Gama waited for a ship to return from Mecca, and seized all the merchandise; they then locked the 380 passengers in the hold and set the ship on fire. It took four days for the ship to sink, killing all men, women, and children.

Da Gama assaulted and exacted tribute from the Arab-controlled port of Kilwa in East Africa, one of those ports involved in frustrating the Portuguese; he played privateer amongst Arab merchant ships, then finally smashed a Calicut fleet of twenty-nine ships, and essentially conquered that port city. In return for peace, he received valuable trade concessions and a vast quantity of plunder, putting him in extremely good favor with the Portuguese crown.

On his return to Portugal, he was made Count of Vidigueira out of lands previously belonging to the future royal Bragança family. He was also awarded feudal rights and jurisdiction over Vidigueira and Vila dos Frades.

Having acquired a fearsome reputation as a "fixer" of problems that arose in India, da Gama was sent to the subcontinent once more in 1524. The intention was that he was to replace the incompetent Eduardo de Menezes as viceroy (representative) of the Portuguese possessions, but he contracted malaria not long after arriving in at Goa and died in the city of Cochin on Christmas Eve in 1524. His body was first buried at St. Francis Church, Fort Kochi then later his remains were returned to Portugal in 1539 and re-interred in Vidigueira in a splendid tomb. The Monastery of the Hieronymites in Belém, Lisbon was erected in honor of his voyage to India.

During his journeys, Da Gama always tried to convert the Indians to Christianity. He brought monks along with him in his journeys to preach. He would be very cruel to Muslims who didn't listen and would often use torture. For this he was often thought of as very cruel by the Indians.

As much as anyone after Henry the Navigator, da Gama was responsible for Portugal's success as an early colonizing power. Besides the first voyage itself, it was his astute mix of politics and war on the other side of the world that placed Portugal in a prominent position in Indian Ocean trade. The Portuguese national epic, the Lusíadas of Luís Vaz de Camões, largely concerns da Gama's voyages.

Following da Gama's initial voyage, the Portuguese crown realized that securing outposts on the eastern coast of Africa would prove vital to maintaining their trade routes to the Far East.

In 1998, the attempts to observe the 500th anniversary of da Gama's arrival in India by the government of Portugal had to be abandoned due to the large scale public anger towards the event.[2][3]

Retrieved from https://www.newworldencyclopedia.org/p/index.php?title=Vasco_da_Gama&oldid=1036607
Categories:
Hidden category:
This page was last edited on 5 May 2020, at 07:27.
Content is available under Creative Commons Attribution/Share-Alike License; additional terms may apply. See Terms of Use for details.