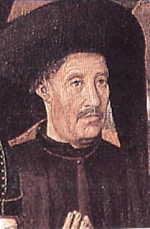 Henry the Navigator (1394 - 1460) was the third son of John I of Portugal, the founder of the Aviz dynasty; and of Philippa of Lancaster, the daughter of John of Gaunt. Henry encouraged his father to conquer Ceuta (1414), the Muslim port, on the North African coast across the Straits of Gibraltar from the Iberian Peninsula. This had profound consequences on Henry's own worldview: Henry became aware of the profit possibilities in the Saharan trade routes that terminated there. Furthermore he became fascinated with Africa in general, with the legend of Prester John, and with expanding Portuguese trade. Ceuta became Portugal's first overseas possession. It was followed by many more.

Contrary to outdated studies that claim that Henry gathered around him at his Vila do Infante on the Sagres Peninsula a school of navigators and map-makers, in fact he did none of this. He did employ some cartographers to help him chart the coast of Mauretania in the wake of voyages he sent there, but for the rest there was no center of navigational science or any supposed "observatory," as Russell makes very clear. He did, however, promote trade and maritime exploration to such a degree that Portugal became, alongside Spain, one of the most powerful European states.

As soon as Christopher Columbus opened up the way to the Americas (1492), Portugal was ready to benefit from the new opportunities. In 1493 the Pope literally divided the world between the two maritime powers, on condition that they Christianized the possessions they claimed overseas. As Grand Master of the Military Order of Christ, religion was very important to Henry and one of his goals was to learn as much as he could about the strength and extent of the Muslim empire, so that it could be defeated. On the other hand, he also enabled a certain amount of cross-cultural and cross-religious exchange by himself learning from the Muslims the importance of trade.

Although Portugal would not live up to this ideal and exploited its colonies for its own gain, Henry's aim was to enable exchange of riches between different people. He is credited by some as having joined East and West. A royal prince who never exercised power, he left a more indelible mark on the world than many who ascended its thrones, or stalked its corridors of power.

Henry was born in 1394, the third son of King John I of Portugal. His mother, the queen, was Philippa of Lancaster, sister to King Henry IV of England. Henry was 21 when he, his father and brothers attacked the Muslim port of Ceuta in northern Morocco. This attack was successful and inspired Henry to explore down the coast of Africa, most of which was unknown to Europeans. Henry claimed he was curious about what lay to the south of Morocco, and wanted to discover the southern limits of the Muslim area so that he might ally with others to defeat the infidels, but in fact his principal motivation without doubt was slave raiding along the coast of Africa.

In 1419, his father appointed him the governor of the province of Algarve. Henry never married and sired no children, although nothing would have prevented him from doing so. He openly disdained the company of women, but we know that he had strong affective bonds with several men and kept a court filled with very young men and boys who were said to have been brought up in his "câmara," that can be translated as his bedchamber. It was from among these that he selected the captains of the voyages that he later sent down the coast of Africa. In fact it is highly probable that he was homosexual, although he claimed merely to be "chaste," most likely to deflect suspicion about his sexuality.

On May 25, 1420, Henry gained appointment as the governor of the very rich Order of Christ, the Portuguese successor to the Knights Templar, which had been wound-up, with headquarters at Tomar. Henry would hold this position for the remainder of his life, and the order was an important source of funds for Henry's ambitious plans of self-aggrandizement, especially his persistent attempts to conquer the Canary Islands.

Henry also had other resources. When John I died in 1433, Henry's eldest brother Duart (Edward) became king, and granted Henry a "royal fifth" of all profits from trading within the areas he discovered as well as the sole right to authorize expeditions beyond Cape Bojador. He also held various valuable monopolies on resources in the Algarve. When Duarte died five years later, Henry supported his brother Pedro for the regency during Alphonse V's minority, and in return received a confirmation of this levy. Henry also promoted the colonization of the Azores during Pedro's regency (1439–1448).

From his Vila do Infante, or Town of the Prince, on the Sagres Peninsula, Henry sponsored voyages down the coast of Mauretania that were primarily slaving expeditions, bringing back to the nearby town of Lagos, from whence they set out, numerous African slaves for Henry own use and for sale by him. Henry justified this on the grounds that he was converting these captives to Christianity. As Sir Peter Russell remarks in his biography, "In Henryspeak, conversion and enslavement were interchangeable terms."

As a result Henry can be regarded as the founding father of the Afro-Atlantic slave trade. The old view that Henry's court rapidly grew into the technological base for exploration, with a naval arsenal and an observatory, etc., has long ago been debunked. There was no observatory, or "school" of navigation or anything of the sort, although Henry did employ cartographers and Jehuda Cresques, a noted cartographer, received an invitation to come to Sagres and probably make maps for Henry, a position he accepted.

The nearby port of Lagos provided a convenient harbor from which these expeditions left. The voyages were made in very small ships, mostly the caravel, a light and maneuverable vessel that used the lateen sail of the Arabs. Most of the voyages sent out by Henry consisted of one or two ships that navigated by following the coast, stopping at night to tie up along some shore.

Until Henry's coastal explorations, Cape Bojador remained the most southerly point known to Europeans on the unpromising desert coast of Africa, although the Periplus of the Carthaginian Hanno the Navigator described a journey further south about 2,000 years earlier.

As a first fruit of this work João Gonçalves Zarco and Tristão Vaz Teixeira rediscovered the Madeira Islands in 1420, and at Henry's instigation Portuguese settlers colonized the islands. In 1427 one of Henry's navigators discovered the Azores—probably Gonçalo Velho. The Portuguese colonized these islands in 1430. Gil Eanes, the commander of one of Henry's expeditions, became the first European known to pass Cape Bojador in 1434.

Henry also continued his involvement in events closer to home. He functioned as a primary organizer of the Portuguese expedition to Tangier in 1437. This proved a disastrous failure: the Moroccans captured Henry's younger brother Fernando, the Saint Prince, and held him captive to guarantee that the Portuguese would fulfill the terms of the peace agreement that had been made. Henry refused to fulfill these terms, thus condemning Fernando to remain in miserable captivity until his death eleven years later. Henry's reputation suffered as a result, and for most of his last 23 years he concentrated on his exploration activities or on Portuguese court politics.

Using the new ship type, the expeditions then pushed onwards. Nuno Tristão and Antão Gonçalves reached Cape Blanco in 1441. The Portuguese sighted the Bay of Arguin in 1443 and built an important fort there about 1448. Dinis Dias soon came across the Senegal River and rounded the peninsula of Cap-Vert in 1444. By this stage the explorers had passed the southern boundary of the desert, and from then on Henry had one of his wishes fulfilled: the Portuguese had circumvented the Muslim land-based trade routes across the western Sahara, and slaves and gold began arriving in Portugal.

By 1452 the influx of gold permitted the minting of Portugal's first gold cruzado coins. From 1444 to 1446, as many as forty vessels sailed from Lagos on Henry's behalf and the first private mercantile expeditions began. At some time in the 1450s, mariners discovered the Cape Verde Islands (António Noli claimed the credit). By 1460, the Portuguese had explored the coast of Africa as far as present-day nation Sierra Leone.

Argues on the basis of Freudian analysis of the texts, etc., that Henry was very probably a homosexual.

Retrieved from https://www.newworldencyclopedia.org/p/index.php?title=Henry_the_Navigator&oldid=1008337
Categories:
Hidden category:
This page was last edited on 19 December 2017, at 17:47.
Content is available under Creative Commons Attribution/Share-Alike License; additional terms may apply. See Terms of Use for details.