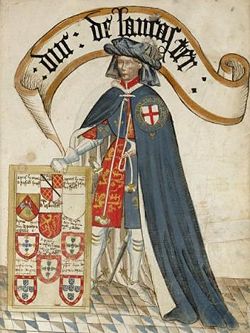 Henry of Grosmont, Duke of Lancaster (c. 1310 - March 23, 1361), also Earl of Derby and Leicester, was a member of the English nobility in the fourteenth century, and a prominent English diplomat, politician, and soldier. He has been described as the king's lieutenant. The son and heir of Henry, 3rd Earl of Lancaster and Maud Chawort'h, he became one of Edward III’s most trusted Captains in the early phases of the Hundred Years War, and distinguished himself with victory in the Battle of Auberoche. He was a founding member of the Order of the Garter, and in 1351, was promoted to the title of duke. Grosmont was also the author of the book, Livre de seyntz Medicines, a highly personal devotional treatise. He is remembered as one of the founders and early patrons of Corpus Christi College, University of Cambridge, which was established by two of the guilds of the town in 1352.

In choosing a lieutenant as capable and as successful as Lancaster, Edward III showed that he was a better judge of character than his father. Edward II's unfortunate choice of several lieutenant's incited revolt and led to his deposition. Although he was a relative of the king, that was of itself no guarantee of royal favor. His uncle had been Edward II's cousin but that had not prevented his execution. It was still necessary for Henry to prove his ability, which he did. Some members of the elite in similar positions avoided the type of service to king and country to which Henry dedicated his life. His legacy is an example of a man who saw privilege as carrying a duty to serve. He carried out this duty with distinction.

Grosmont's uncle, Thomas of Lancaster, was the son and heir of Edward I’s brother Edmund Crouchback. Through his inheritance and a fortunate marriage, Thomas became the wealthiest peer in England, but constant quarrels with King Edward II about his profligate rule led to his execution in 1322. Having no heir, Thomas’s possessions and titles went to his younger brother Henry—Grosmont’s father. Earl Henry of Lancaster assented to the deposition of Edward II in 1327, but did not long stay in favor with the regency of Queen Isabella and Roger Mortimer. When Edward III took personal control of the government in 1330, relations with the Crown got better, but by this time the older Henry was already struggling with poor health and blindness. Little is known of Grosmont’s early years, but is seems clear that he was born at the castle of Grosmont in Monmouthshire, and that he was born c. 1310, not around the turn of the century as previously held. According to his own memoirs he was better at the martial arts than at academic subjects, and did not learn to read until later in life.[1] In 1330, he was knighted, and represented his father in parliament. It had been in defense of parliament's right to supervise the national budget that Thomas had clashed with Edward II. Edward III, in contrast, did much to strengthen parliament's role in the Kingdom's governance. The next year, Henry is recorded as participating in a Royal tournament, at Cheapside.

In 1333, he took part in Edward’s Scottish campaign, though it is unclear whether he was present at the great English victory at the Battle of Halidon Hill.[2] After further service in the north, he was appointed the King's lieutenant in Scotland in 1336. The next year he was one of the six men Edward III promoted to the higher levels of the peerage. One of his father’s lesser titles, that of Earl of Derby, was conferred on Grosmont.

With the outbreak of the Hundred Years' War in 1337, Grosmont's attention was turned towards France. He took part in several diplomatic missions and minor campaigns, and was present at the great English victory in the naval battle of Sluys in 1340.[3] Later the same year, he was required to commit himself as hostage in the Low Countries for the king’s considerable debts. He remained hostage until the next year, and had to pay a large ransom for his own release.[4] On his return he was made the king's lieutenant in the north, and stayed at Roxburgh until 1342. The next years he spent in diplomatic negotiations in the Low Countries, Castile and Avignon.

In 1345, Edward III was planning a major assault on France. A three-pronged attack would have the Earl of Northampton attacking from Brittany, the King himself from Flanders, while Grosmont was dispatched to Aquitaine to prepare a campaign in the south. Moving rapidly through the country he confronted the comte d’Isle at Auberoche on 21 October, and here achieved a victory described as "the greatest single achievement of Lancaster's entire military career."[5] The ransom from the prisoners has been estimated at £50,000.[6] The next year, while Edward was carrying out his Crécy campaign, Grosmont laid siege to, and captured, Poitiers, before returning home to England in 1347.

In 1345, while Grosmont was in France, his father died. The younger Henry was now Earl of Lancaster—the wealthiest and most powerful peer of the realm. After participating in the siege of Calais in 1347, the king honored Lancaster by including him as a founding knight of the Order of the Garter in 1348.[7] A few years later, in 1351, Edward bestowed an even greater honor on Lancaster, when he created him Duke of Lancaster. The title of duke was of relatively new origin in England; only one other ducal title existed prior.[b] In addition to this, Lancaster was given palatinate status for the county of Lancashire, which entailed a separate administration independent of the crown.[8] This grant was quite exceptional in English history; only two other counties palatine existed: Durham, which was an ancient ecclesiastical palatinate, and Chester, which was crown property. It is a sign of Edward’s high regard for Lancaster that he would bestow such extensive privileges on him. The two men were also second cousins, through their great-grandfather Henry III, and practically coeval (Edward was born in 1312), so it is natural to assume that a strong sense of camaraderie existed between them. Another factor that might have influenced the king’s decision was the fact that Henry had no male heir, so the grant was made for the Earl’s lifetime only, and not intended to be hereditary.

Lancaster spent the 1350s intermittently campaigning and negotiating peace treaties with the French. In 1350 he was present at the naval victory at Winchelsea, where he allegedly saved the lives of the Black Prince and John of Gaunt.[9] The years 1351-2 he spent on crusade in Prussia. It was here that a quarrel with Otto, Duke of Brunswick, almost led to a duel between the two men, narrowly averted by the intervention of the French King, Jean II.[10] In the later half of the decade campaigning in France resumed. After a chevauchée in Normandy in 1356 and the siege of Rennes in 1358, Lancaster participated in the last great offensive of the first phase of the Hundred Years’ War: The Rheims campaign of 1359-60. Then he was appointed principal negotiator for the treaty of Brétigny, where the English achieved very favorable terms.

Returning to England in November 1360, he fell ill early the next year, and died at Leicester Castle on March 23. It is likely that the cause of death was the plague, which that year was making a second visitation of England.[11]

Lancaster was married to Isabella, daughter of Henry, Lord Beaumont, in 1330. The two had no sons, but two daughters: Maude and Blanche. While Maude was married to the Duke of Bavaria, Blanche married Edward III’s younger son, John of Gaunt. Gaunt ended up inheriting Lancaster’s possessions and ducal title, but it was not until 1377, when the dying King Edward III was largely incapacitated, that he was able to restore the palatinate rights for the county of Lancaster. When Gaunt’s son Henry of Bolingbroke usurped the crown in 1399 and became Henry IV, the vast Lancaster inheritance was merged with the crown as the Duchy of Lancaster.

More of Lancaster's character is known than of most of his contemporaries, through his memoirs the Livre de seyntz medicines (Book of the Holy Doctors). In addition to the 1967 Arnould edition, Labarge describes the book in some detail. The book is a highly personal treatise on matters of religion and piety, but it also contains details of historical interest. It is, among other things, revealed that Lancaster, at the age of 44 when he wrote the book in 1354, suffered from gout. The book is primarily a devotional work ; it is organized around seven wounds which Henry claims to have, representing the seven sins. Lancaster confesses to his sins, explains various real and mythical medical remedies in terms of their theological symbolism, and exhorts the reader to greater morality.[12] He regretted that he had not coveted God's kingdom as much as he had more land and wealth.[13] Labarge says that this books is "still rewarding readers for historians" because it "provides unusual illumination on the personality, beliefs and background of one of the fourteenth century's most attractive and balanced characters," which represents high praise.[14]

Lancaster proved himself to be a competent lieutenant to the king, skilled on the field of battle and in diplomacy. Edward III was a much better judge of character than his father, whose advisers had been notorious for exercising bad influence and had caused a series of revolts against his rule. Not only did Edward III pay parliament much more respect than had Edward II, despite his coronation promise to do so but he also gathered around himself people who were better suited to share in the task of governing the kingdom. There is no doubt at all that Henry Lancaster was one such individual. Being a relative of the king was of itself no guarantee of royal favor. It was still necessary for him to prove his ability, which he did. Some members of the elite in similar positions avoided the type of service to king and country to which Henry dedicated his life. His legacy is an example of a man who saw privilege as carrying a duty to serve. He carried out this duty with distinction.