Henry III (October 1, 1207 – November 16, 1272) was the son and successor of John Lackland as King of England, reigning for fifty-six years, from 1216 to his death. His contemporaries knew him as Henry of Winchester. He was the first child king in England following the Norman Conquest. Despite his long reign, his personal accomplishments were few and he was considered a political and military failure. England, however, prospered during his century and his greatest monument is Westminster, which he made the seat of his government and where he expanded the abbey as a shrine to Edward the Confessor.

He assumed the crown under the regency of the popular William Marshal, but the England he inherited had undergone several drastic changes during the reign of his father. He spent much of his reign fighting the barons over the Magna Carta and the royal rights, and was eventually forced to call the first "parliament" in 1264. He was also unsuccessful on the Continent, where he endeavored to re-establish English control over Normandy, Anjou, and Aquitaine.

Henry III was born in 1207 at Winchester Castle. He was the son of King John and Isabella of Angoulême.

After his father John’s death in 1216, Henry, who was nine at the time, was hastily crowned in Gloucester Cathedral; he was the first child monarch since the Norman invasion of England, in 1066. Under John's rule, the barons were supporting an invasion by Prince Louis of France because they disliked the way that John had ruled the country. However, they quickly saw that the young prince was a safer option. Henry's regents reissued Magna Carta in his name, on November 12, 1216, omitting some clauses, such as clause 61, and again in 1217. When he turned eighteen in 1225, Henry III himself reissued Magna Carta again, this time in a shorter version with only 37 articles.

Attitudes and beliefs during his reign

As Henry reached maturity, he was keen to restore royal authority, looking towards the autocratic model of the French monarchy. Henry married Eleanor of Provence and he promoted many of his French relatives to higher positions of power and wealth. For instance, one Poitevin, Peter des Riveaux, held the offices of Treasurer of the Household, Keeper of the King's Wardrobe, Lord Privy Seal, and the sheriffdoms of twenty-one English counties simultaneously. Henry's tendency to govern for long periods with no publicly-appointed ministers who could be held accountable for their actions and decisions did not make matters any easier. Many English barons came to see his method of governing as foreign.

Henry was much taken with the cult of the Anglo-Saxon saint king Edward the Confessor, who had been canonized in 1161. Told that St Edward dressed austerely, Henry took to doing the same and wearing only the simplest of robes. He had a mural of the saint painted in his bedchamber for inspiration before and after sleep and even named his eldest son Edward. Henry designated Westminster, where St Edward had founded the abbey, as the fixed seat of power in England and Westminster Hall duly became the greatest ceremonial space of the kingdom, where the council of nobles also met. Henry appointed French architects from Rheims to the renovation of Westminster Abbey in Gothic style. Work began, at great expense, in 1245. The centerpiece of Henry's renovated Westminster Abbey was to be a shrine to the confessor king, Edward. Henry's shrine to Edward the Confessor was finished in 1269, and the saint's relics were installed.

Henry was known for his anti-Jewish decrees, such as a decree compelling Jews to wear a special "badge of shame" in the form of the Two Tablets.

Henry was extremely pious and his journeys were often delayed by his insistence on hearing Mass several times a day. He took so long to arrive on a visit to the French court that his brother-in-law, King Louis IX of France, banned priests from Henry's route. On one occasion, as related by Roger of Wendover, when King Henry met with papal prelates, he said, "If (the prelates) knew how much I, in my reverence of God, am afraid of them and how unwilling I am to offend them, they would trample on me as on an old and worn-out shoe."

Henry's advancement of foreign favorites, notably his wife's Savoyard uncles and his own Lusignan half-siblings, was unpopular with his subjects and barons. He was also extravagant and avaricious; when his first child, Prince Edward, was born, Henry demanded that Londoners bring him rich gifts to celebrate. He even sent back gifts that did not please him. Matthew Paris reports that some said, "God gave us this child, but the king sells him to us." 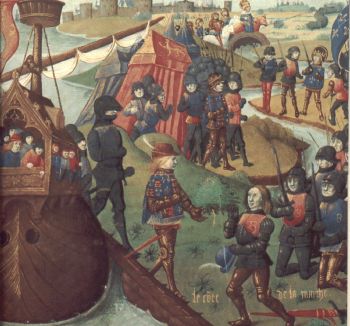 Henry's reign came to be marked by civil strife as the English barons, led by de Montfort, demanded more say in the running of the kingdom. French-born Simon de Montfort had originally been one of the foreign upstarts so loathed by many as Henry's foreign councilors; after he married Henry’s sister Eleanor, without consulting Henry, a feud developed between the two. Their relationship reached a crisis in the 1250s, when de Montfort was brought up on spurious charges for actions he took as lieutenant of Gascony, the last remaining Plantagenet land across the English Channel. He was acquitted by the Peers of the realm, much to the King's displeasure.

Henry also became embroiled in funding a war in Sicily on behalf of the Pope in return for a title for his second son Edmund, a state of affairs that made many barons fearful that Henry was following in the footsteps of his father, King John, and needed to be kept in check, too. De Montfort became leader of those who wanted to reassert Magna Carta and force the king to surrender more power to the baronial council. In 1258, seven leading barons forced Henry to agree to the Provisions of Oxford, which effectively abolished the absolutist Anglo-Norman monarchy, giving power to a council of fifteen barons to deal with the business of government and providing for a three-yearly meeting of parliament to monitor their performance. Henry was forced to take part in the swearing of a collective oath to the Provisions of Oxford.

In the following years, those supporting de Montfort and those supporting the king grew more and more polarized. Henry obtained a papal bull in 1262, exempting him from his oath and both sides began to raise armies. The Royalists were led by Prince Edward, Henry's eldest son. Civil war, known as the Second Barons' War, followed.

The charismatic de Montfort and his forces had captured most of southeastern England by 1263, and at the Battle of Lewes on May 14, 1264, Henry was defeated and taken prisoner by de Montfort's army. While Henry was reduced to being a figurehead king, de Montfort broadened representation to include each county of England and many important towns—that is, to groups beyond the nobility. Henry and Edward continued under house arrest. The short period that followed was the closest England was to come to complete abolition of the monarchy until the Commonwealth period of 1649–1660 and many of the barons who had initially supported de Montfort began to suspect that he had gone too far with his reforming zeal.

But only fifteen months later, Prince Edward had escaped captivity (having been freed by his cousin, Roger Mortimer) to lead the royalists into battle again and he turned the tables on de Montfort at the Battle of Evesham in 1265. Following this victory, savage retribution was exacted on the rebels.

Henry's reign ended when he died in 1272, after which he was succeeded by his son, Edward I. His body was laid, temporarily, in the tomb of Edward the Confessor while his own sarcophagus was constructed in Westminster Abbey.

Henry III was the first English monarch to be crowned as a child. This fact is thought to be the cause of his many unfortunate errors in judgment. However, his reign as King offered many positives in England. The educational system in England thrived under his reign, particularly at Oxford University. His love of art and architectural and the masterpieces he had built are his greatest legacies. He ordered the rebuilding of Westminster Abbey in the Gothic style. It continues to be a main tourists attraction.

There is reason to doubt the existence of several attributed children of Henry and Eleanor. Richard, John, and Henry are known only from a fourteenth century addition made to a manuscript of Flores historiarum, and are nowhere contemporaneously recorded. William is an error for the nephew of Henry's half-brother, William de Valence. Another daughter, Matilda, is found only in the Hayles abbey chronicle, alongside such other fictitious children as a son named William for King John, and a bastard son named John for King Edward I. Matilda's existence is doubtful, at best.