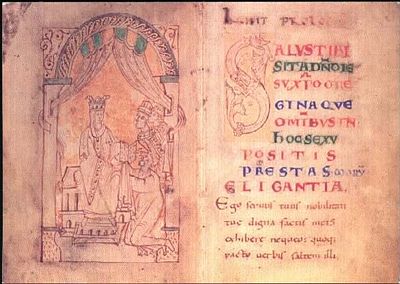 Harthacanute, pictured standing to the right of his mother, Emma of Normandy (sitting) and his half-brother and successor, Edward the Confessor (kneeling) in the Encomium Emmae.

Harthacanute (Canute the Hardy, sometimes Hardicanute, Hardecanute, Hörthaknútr; Danish: Hardeknud) (1018 – June 8, 1042) was King of Denmark from 1035 to 1042 as well as King of England from 1040 to 1042. He was the only son of Canute the Great and Emma of Normandy. Harthacanute's reign belongs to the end story of England's Anglo-Saxon period and of an era when involvement with the countries of Scandinavia dominated external relations. Payment of the danegeld and constant invasion by Vikings often meant that England was more or less a vassal, or subject state. Historical force however now favored a closer relationship between England and continental Europe, which was to be achieved through Harthacanute's Norman relatives in the person of his mother's great-nephew, William I of England. Arguably, had England remained an off-shore island culturally isolated from Europe, she would not have played the role she later did in world affairs, emerging as a major power and ultimately as a defender of freedom against tyranny in World War I and World War II.

Harthacanute's reign is not credited with any significant achievement. His significance lies in helping to bridge the transition period between the old and the new order. His eyes were more fixed on his Scandinavian, than on his English, inheritance. Yet, while the nations of the North East would play important cultural roles and at times expanded into the Southern European space, none of them acquired a substantial overseas empire nor did they lead the free-world in two World Wars, which England did before the United States entered these conflicts. It was England that acquired the largest empire in the modern world and stood up against Adolf Hitler's Third Reich while Denmark and Norway were occupied.

Canute the Great invaded England with his father, Sweyn I of Denmark in 1013. Sweyn died during the campaign against the Anglo-Saxon King, Ethelred the Unready and Canute, declared king of Denmark and of England by his men, was initially forced to retreat and to return to Scandinavia. Ethelred died soon after Sweyn. Assembling a fleet and a new invasion force, he returned to England in 1015, confronting Edmund Ironside, Ethelred's surviving son by his first marriage, for the throne. In October 1016, the two rivals chose to enter a peace treaty whereby they divided the kingdom between them. By November, however, Edmund was dead (from natural causes) and Canute was undisputed king of all England. However, to add legitimacy to his reign, he also married Ethelred's widow, Emma, and decided to make her much a partner in his rule. Not only was this a role that than no previous Queen of England had fulfilled but it was also made explicit during their joint coronation ceremony. This ceremony stressed the Queen as a sharer in royal power and as a peace-maker. Canute's vows stressed that the rod of office with which he was invested was a "rod of justice, "not a rod of power and domination." With reference to the Queen, there was "no hint of subordination." Emma, although a Norman, had already been crowned as Ethelred's Queen and was therefore the legitimate English Queen. Through their marriage, Canute was also acquiring English identity. The "English" identity of the royal couple was also emphasized in the coronation ritual.

Canute and Emma were generous benefactors of the English Church. Consequently, when the story of their reign was narrated in the Anglo-Saxon Chronicle, it was depicted as a period of stability and peace. Emma bore her new husband two children, Harthacanute in 1018 and Gunhild, a daughter in 1020. A pre-nuptial agreement stipulated that any male child of Emma's would become Canute's heir. Canute already had son, Harold Harefoot by his former wife, a Ælfgifu of Northampton. However, as designated heir, Harthacanute was raised and trained as Canute's successor not only to his English but also to his Scandinavian thrones. When Canute died in 1035, Canute succeeded him following the agreement. However, he was in Denmark at the time, where, challenged by Magnus I of Norway for the throne, he soon found himself embroiled in a protracted power struggle.

Dispute with Magnus and Harold

In his absence, Harold Harefoot was declared regent. In 1037, with Harthacanute still fighting for his Scandinavian kingdoms, Harefoot usurped the English throne. The Anglo-Saxon Chronicle chose to stress dispute about Harold's claim to be Canute's son, appearing to favor Harthacanute: "Some men said of Harold that he was the son of King Canute and Elfgive, the daughter of Elfelm the earldorman, but it seemed incredible to many men." However, the "men ... forsook Harthacanute because he was too long in Denmark."[1] Harthacanute's mother, Emma, was forced to flee to Flanders. The Chronicle says that Emma was "driven out without any pity, against the waging winter!" Before she did so, one of her two sons by Ethelred, Alfred, was murdered by supporters of Harold, who tricked him and his brother, the future king Edward the Confessor into returning to England from Normandy, where they had taken refuge during the battles following their father's death.

In 1038, Harthacanute settled his difficulties in Scandinavia through a treaty with Magnus. Magnus would retain the Norwegian throne, which he had occupied and Harthacanute that of Denmark. However, if one of them were to die without an heir the other should be his successor.

Harthacanute now prepared for an invasion of England to take the crown from Harold. Harold, however, died on March 17, 1040, precluding the need for conquest. Harthacanute was invited to England, and the landing at Sandwich on June 17 1040, seven days before Midsummer with a fleet of 62 warships was a peaceful one. He did though, with apparent scorn, command Harold's body to be taken from its tomb and cast in a fen.

Harthacanute was a harsh and unpopular ruler: to pay for his fleet, he severely increased the rate of taxation, and in 1041 the people of Worcester killed two of Harthacanute's housecarls (household soldiers) who had been collecting the tax, prompting an attack by Harthacanute in which the city was burned. The story of Lady Godiva riding naked through the streets of Coventry to persuade the local earl to lower taxes may come from the reign of Harthacanute.

In 1041, Harthacanute invited his half-brother Edward the Confessor back from exile in Normandy to become a member of his household, and probably made Edward his heir. Harthacanute was unmarried and had no known children. It is rumored that he fathered an illegitimate son, William Canute.

During Harthacanute’s reign, Emma continued to exercise a powerful position, also returning from exile. It was at this period that her own account of her and of Canute's life and times, the Enconium, was published. She appears to have understood that until her son married and crowned a new Queen, her coronation and her right to share in power remained valid.

After the death of both Canute and of Harthacanute, Emma controlled the royal treasury, which indicates the extent of her authority. At the end of the Enconium, Emma and her two sons, Harthacanute and Edward, are depicted as a ruling Trinity, with all three as partners in power. The Chronicle then ends with an invocation of the Trinity, suggesting that the same relationship existed between the three co-rulers as exists between the members of the Trinity.[2]

In contrast to this positive ending, the Anglo-Saxon Chronicle, which depicted Canute's reign fairly sympathetically without any derogatory comments to summarize his rule, such as those that follow the death of many kings, dismissed Harthancanute as having achieved nothing of significance. Emma, too, is held in esteem. The Chronicle labors the point that she was hospitably received in Bruges and "protected and entertained there as long as she had need."[1]

Ten days short of two years as King, June 8, 1042, Harthacanute suffered a fit while drinking and dropped dead. The Chronicle sums up his reign in dismissive, derogatory style:

Then were alienated from him all that before had desired him, for he framed nothing royal during his whole reign. He ordered the dead Harold tom be dragged up and thrown into a ditch. He was king over all England two years, wanting ten days, and is buried in Old Minster at Winchester with King Canute his father. And his mother, for his soul, gave New Minster the head of St. Valentine."[3]

It is Emma and not her son who appears to be spoken of with sympathy for donating a relic to the Church on his behalf. Edward assumed the throne on Harthacanute's death, restoring the Saxon royal line of Wessex. He too died without an heir, leaving the way open for Emma's, great-nephew, William I of England to claim the throne. He was succeeded in Denmark, as agreed, by Magnus I of Norway, who ruled until 1047. His successor, Sweyn II known as Denmark's last Viking king, was the son of Canute's sister.

Harthacanute did not rule long enough to achieve very much. According to accounts of the time, apart from levying a heavy tax to pay for an invasion fleet he did not actually use, he did little enough. Emma's references to his rule are more positive. She speaks of him arranging "his affairs in peace and "being gripped by brotherly love" inviting to Edward "to come and hold the kingdom with himself."[2] Harthacanute, through his father, was a link to a past, when the Scandinavians had regarded England as within their sphere of interest. Payment of the Danegeld, constant Viking attacks and the presence in England of Danelaw outposts directed the attention of successive Anglo-Saxon rulers more towards the north-east than to the south, across the English channel. It was Harthacanute's preoccupation with securing his Scandinavian inheritance that all but lost him the English throne.

Emma's own marriage with Ethelred had been arranged in order to create a new alliance with the Dukes of Normandy. It would be this alliance, rather than any continued link with Canute's Denmark, that dominated England's future. Following Edward's death, Harold II son of the Earl of Wessex, claimed the English throne on January 5, 1066. On October 14, 1066, he was slain at the Battle of Hastings against William I's invading force. William became king. From then until the reign of Elizabeth I, England looked to France as her natural field of extraterritorial interest, often ruling large portions of territory and continuing to claim the title "Duke of Normandy" for its monarch. Had England remained isolated from Europe, its later imperial expansion as a world power and its role in two World Wars in defense of freedom may not have become part of historical narrative. Anglo-Saxon England was no more. The new England was more integral to European affairs than the old England, which had been more part of the Scandinavian space than of the European space.