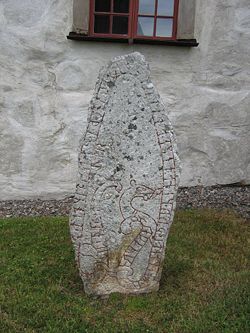 The rune stone U 344 in Orkesta, Uppland, Sweden, raised in memory of the Viking Ulf of Borresta, says that he had taken three danegelds in England. The first one was with Skagul Toste, the second one with Thorkel the High, and the last one with Canute the Great.

The Danegeld ("Dane gold") was an English tribute raised to pay off Viking raiders to save the land from being ravaged. The expeditions were usually led by the Danish kings, but they were composed by warriors from all over Scandinavia, and they eventually brought home more than 100 tons of silver. During the period when the Vikings extracted this money, the people of the English nation were not as skilled at sea-faring as their Scandinavian cousins, whose raiding voyages across the seas were financially lucrative but disrupted the lives in the communities they ravished. Perhaps the development of English maritime power was in part a response to their earlier vulnerability to Viking raids. It was the Norman Conquest in 1066 that moved England from out of the Scandinavian sphere of interest, although William actually paid Danegeld to Sweyn II of Denmark and may well have commissioned the great Domesday Book to find out how much money was available for further payments, if needed. England was never invaded again, however although she did not emerge as a sea-faring power until her own embroilment in European affairs—itself a legacy of the Norman invasion—ended in the sixteenth century.[1] The term has come to be used as a warning and a criticism of any coercive payment, whether in money or kind. It resembled the type of moneys demanded by gangsters for so-called “protection.”

The term has come to be used as a warning and a criticism of paying any coercive payment whether in money or kind.

In Britain the phrase is often coupled with the experience of Chamberlain's Appeasement of Hitler.[2] 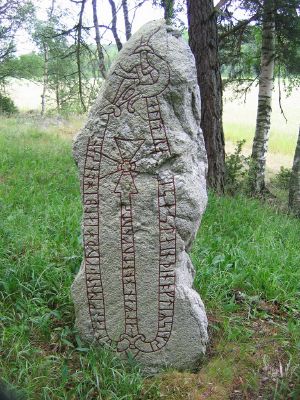 The runestone U 194, in a grove near Väsby, Uppland, Sweden, was raised by a Viking in commemoration of his receiving one danegeld in England.

To emphasize the point, people often quote two or more lines from the poem "Dane Geld" by Kipling as did Tony Parsons in The Daily Mirror, when criticizing the Rome daily La Repubblica for writing "Ransom was paid and that is nothing to be ashamed of," in response to the announcement that the Italian government paid $1 million for the release of two hostages in Iraq in October 2004.[3]

The first payment of the Danegeld to the Vikings took place in 856. English payment, of 10,000 pounds (3,732 kg) of silver, was also made in 991 following the Viking victory at the Battle of Maldon in Essex, when King Aethelred "The Unready" was advised by Archbishop Sigeric of Canterbury and the aldermen of the south-western provinces to buy off the Vikings rather than continue the armed struggle.

In 994 the Danes, under King Sweyn Forkbeard and Olaf Trygvason, returned and laid siege to London. They were once more bought off, and the amount of silver paid impressed the Danes with the idea that it was more profitable to extort payments from the English than to take whatever booty they could plunder. 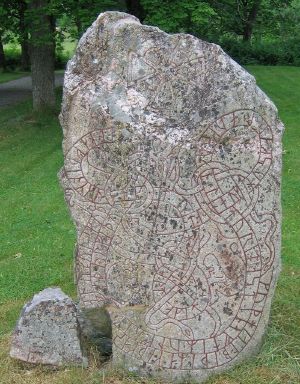 The runestone U 241 in Lingsberg, Uppland, Sweden, was raised by the grand-children of Ulfríkr in commemoration of his receiving two danegelds in England.

In 1016 Sweyn Forkbeard's son, Canute, became King of England. After two years he felt sufficiently in control of his new kingdom to the extent of being able to pay off all but 40 ships of his invasion fleet, which were retained as a personal bodyguard, with a huge Danegeld of 72,000 pounds (26,873 kg) of silver collected nationally, plus a further 10,500 pounds (3,919 kg) of silver collected from London.

William the Conqueror paid Danegeld to Sweyn II of Denmark and may well have commissioned the great Domesday Book to find out how much money was available for further payments, if needed. He replaced what had been an annual Denegeld tax with a land tax in 1116, the last year in which Danegeld was levied.

This kind of extorted tribute was not unique to England: according to Snorri Sturluson and Rimbert, Finland and the Baltic states (Grobin) paid the same kind of tribute to the Swedes. In fact, the Primary Chronicle relates that the regions paying protection money extended east towards Moscow, until the Finnish and Slavic tribes rebelled and drove the Varangians overseas. Similarly, the Sami peoples were frequently forced to pay tribute in the form of pelts. A similar procedure also existed in Iberia, where the contemporary Christian states were largely supported on tribute gold from the taifa kingdoms.[4]

It is estimated that the total amount of money paid by the Anglo-Saxons amounted to some sixty million pence. More Anglo-Saxon pence of this period have been found in Sweden than in England and at the farm where the runestone Sö 260 talks of a voyage in the West, a hoard of several hundred English coins was found.

...he shall with speed to England,
For the demand of our neglected tribute

Danegeld is the subject of a poem by Rudyard Kipling. It ends in the following words: