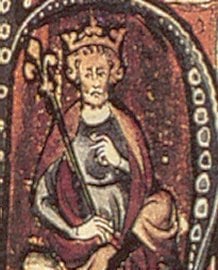 Canute I the Great

Canute (or Cnut) I, or Canute the Great (Old Norse: Knútr inn ríki, Danish: Knud den Store, Norwegian: Knut den mektige) (994/995 – November 12, 1035) was king of England, Denmark, and Norway and governor or overlord of Schleswig and Pomerania. Canute is generally regarded as a successful ruler who brought peace to the people over whom he ruled. England was so peaceful during his reign that he frequently was able to leave the British isles to deal with affairs elsewhere, although England was his base.

He was the son of king Sweyn Forkbeard of Denmark. Canute's mother was Gunhild (formerly Swiatoslawa, daughter of Mieszko I of Poland).

Canute was reared by a mother whose own mother Dubrawka had been abducted from a religious house and married to the first Duke of Poland, Mieszko, who later adopted Christianity. This, along with his father's stout beliefs, was probably the foundation of Canute's pragmatic relation to religion which would later greatly influence both Denmark and Britain.

Little is known about Canute’s life before 1013. He was less than 20 years old when he accompanied his father on his successful invasion of England in August 1013. While King Sweyn was off conquering England, Canute was left in charge of the remainder of the Danish army at Gainsborough. Upon the sudden death of his father the following February, Canute was proclaimed king by the Danish army. However, the assembly of magnates refused to accept him and instead voted to restore the defeated king Ethelred the Unready from exile in Normandy.

Ethelred quickly raised an army, forcing Canute to abandon England and sail back to Denmark with the remnants of his army. When he sailed past Sandwich, Canute mutilated hostages given to his father as pledges of support from local nobles. He sent a powerful message that all oath-breakers would be punished.

Canute’s older brother Harald became the King of Denmark as Harold II on their father’s death. Canute suggested that the two brothers should jointly rule the Kingdom, which found little appeal with his brother. However, Harold promised him assistance and support for his conquest of England if Canute renounced his rights to the Danish throne. Canute kept silent and waited for an opportunity to present itself when he would reclaim his throne in England.

Canute proceeded to England in the summer of 1015 with a large Danish force of approximately 10,000 men. This time, he was joined by his Norwegian brother-in-law Eiríkr Hákonarson, who was an experienced soldier and statesman. Fortunately for Canute, a strong mercenary chief, Thorkell the High, pledged allegiance to him. The Earl Eadric also joined the Danes with forty ships.

The invasion force landed in Wessex, which was occupied quickly. Northumbria fell next, and Canute executed its Earl Uhtred for breaking an oath pledged to Sweyn Forkbeard two years earlier. In April 1016, Canute entered the Thames with his fleet and besieged London. King Ethelred died suddenly during the siege, and his son Edmund Ironside was proclaimed king. When Edmund left London to raise an army in the countryside, he was intercepted by Canute at Ashingdon, Essex. A decisive battle followed, and Edmund was forced to sue for peace.

Meeting on an island in the Severn River, Canute and Edmund agreed to divide the kingdom, but Edmund's death that November left Canute as sole ruler, leading to his acclamation as king by the Witenagemot[1] in January 1017.

In order to associate his line with the overthrown English dynasty and to insure himself against attack from Normandy where Ethelred's sons Edward the Confessor and Alfred Atheling were in exile, Canute married (July 1017) Ethelred's widow Emma of Normandy, daughter of Richard the Fearless, Duke of Normandy. He proclaimed their son Harthacanute as heir in preference to Harold Harefoot, his illegitimate son by Aelgifu of Northampton.

As King of England, Canute combined English and Danish institutions and personnel. His mutilation of the hostages taken by his father in pledge of English loyalty is remembered above all as being uncharacteristic of his rule.

By dividing the country (1017) into the four great earldoms of Wessex, Mercia, East Anglia, and Northumbria, he instituted the system of territorial lordships which would underlie English government for centuries. The very last Danegeld ever paid, a sum of £82,500, went to Canute in 1018. He felt secure enough to send the invasion fleet back to Denmark with £72,000 that same year[2]

Canute reinstated the laws passed under King Edgar. However, he reformed the existing laws and initiated a new series of laws and proclamations. Two significant ones were On Heriots and Reliefs, and Inheritance in Case of Intestacy. He strengthened the coinage system, and initiated a series of new coins which would be of equal weight as those being used in Denmark and other parts of Scandinavia. This greatly improved the trade of England, whose economy was in turmoil following years of social disorder.

In 1018 (or 1019) Canute succeeded his elder brother Harold II as king of Denmark, and appointed his brother-in-law Ulf Jarl as the earl of Denmark. When the Swedish king Anund Jakob and the Norwegian king Saint Olaf took advantage of Canute's absence and attacked Denmark, Ulf convinced the freemen to elect Harthacanute king, since they were discontented with Canute's absenteeism. This was a ruse from Ulf since his role as the caretaker of Harthacanute would make him the ruler of Denmark.

When Canute learnt of what had happened in 1026, he returned to Denmark and with Ulf Jarl's help, he defeated the Swedes and the Norwegians at the Battle of Helgeå. This service, did not, however, make Canute forgive Ulf for his coup. At a banquet in Roskilde, the two brothers-in-law were playing chess and started arguing with each other. The next day, the Christmas of 1026, Canute had one of his Housecarls kill Ulf Jarl in the church of Trinity. The accounts of the two brothers and Ulf's death are contradictory.

In 1028, Canute conquered Norway with a fleet of 50 ships from England. At an assembly at Trondheim, he was officially crowned King. His new title was “King of all England and of Denmark, Norway and part of Sweden.” His attempt to govern Norway through Aelgifu (his concubine) and his other son by her, Sweyn, ended in rebellion and the restoration of the former Norwegian dynasty under Magnus I.

Conrad II, Holy Roman Emperor was friendly with Canute and had his young son Henry married to Canute's daughter Cunigunde (Gunhilda). The emperor gave Canute the Mark of Schleswig and Pomerania to govern. The latter was probably the fief of Canute, since Boleslaus I of Poland sent his army to help Canute conquer England.

Relations with the Church

It is hard to conclude if Canute’s devotion to the Church came out of deep religious devotion or merely as a means to consolidate and increase his political power. Even though Canute was accepted as a Christian monarch after the conquest, the army he led to England was largely heathen, so he had to accept the tolerance of the pagan religion. His early actions made him uneasy with the Church, such as the execution of the powerful earls in England in 1016, as well as his open relationship with a concubine Aelgifu of Northhampton, who he treated as his northern queen.

However, his treatment of the Church could not have been more sincere. Canute not only repaired all the churches and monasteries that were looted by his army, but he also constructed new ones. He became a big patron of the monastic reform, which was popular among the ecclesiastical and secular population. The most generous contribution he is remembered for is the impressive gifts and relics that he bestowed upon the English Church.

Canute’s pilgrimage to Rome in 1027 was another sign of his dedicated devotion to the Christian faith. It is still debated whether he went to repent his sins, or to attend Emperor Conrad II’s coronation in order to improve relations between the two powers. While in Rome, Canute obtained the agreement from the Pope to reduce the fees paid by the English archbishops to receive their pallium. He also arranged with other Christian leaders that the English pilgrims should pay reduced or no toll tax on their way, and that they would be safeguarded on their way to Rome.

Success as king of England?

Canute is generally regarded as a wise and successful king of England, although this view may in part be attributable to his good treatment of the church, which controlled the history writers of the day. He brought England more than two decades of peace and prosperity. The medieval church liked order supported good and efficient government whenever the circumstances allowed it. Thus, we see him described as a religious man, despite the fact that he lived openly in what was effectively a bigamous relationship, and despite his responsibility for many political murders. He apologized for the excesses of the Vikings.

Legend of the waves

Canute is perhaps best remembered for the legend of how he commanded the waves to go back. According to the legend, he grew tired of flattery from his courtiers. When one such flatterer gushed that the king could even command the obedience of the sea, Canute proved him wrong by practical demonstration at Bosham, his point being that even a king's powers have limits. Unfortunately, this legend is usually misunderstood to mean that he believed himself so powerful that the natural elements would obey him, and that his failure to command the tides only made him look foolish. It is quite possible that the legend is simply pro-Canute propaganda.

Canute died in 1035, at Shaftesbury in Dorset, and was buried at Winchester. On his death, Canute was succeeded in Denmark by Harthacanute, reigning as Canute III. Harold took power in England, however, ruling until his death (1040), whereupon the two crowns were again briefly reunited under Harthacanute.