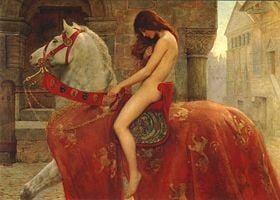 Godiva (or Godgifu) (fl. 1040-1080) was an Anglo-Saxon noblewoman who, according to legend, rode naked through the streets of Coventry in England in order to gain a remission of the oppressive toll imposed by her husband on his tenants. The name "Peeping Tom" for a voyeur comes from later versions of this legend in which a man named Tom watched her ride and was struck blind or dead.

Lady Godiva was the wife of Leofric (968–1057), Earl of Mercia. Her name occurs in charters and the Domesday survey, though the spelling varies. The Old English name Godgifu or Godgyfu meant "gift of God"; Godiva was the Latinized version. Since the name was a popular one, there are contemporaries of the same name.[1][2]

If she is the same Godgifu who appears in the chronicles of Ely, Liber Eliensis (end of twelfth century), she was a widow when Leofric married her. Both Leofric and Godiva were generous benefactors to religious houses. In 1043 Leofric founded and endowed a Benedictine monastery at Coventry.[3] Writing in the twelfth century, Roger of Wendover credits Godiva as the persuasive force behind this act. In the 1050s, her name is coupled with that of her husband on a grant of land to the monastery of Saint Mary, Worcester and the endowment of the minster at Stow Saint Mary, Lincolnshire.[4][5] She and her husband are commemorated as benefactors of other monasteries at Leominster, Chester, Much Wenlock and Evesham.[6]

The manor of Woolhope in Herefordshire, along with three others, was given to the cathedral at Hereford before the Norman Conquest by the benefactresses Wulviva and Godiva–traditionally held to be Lady Godiva and her sister. The church there has a twentieth century stained glass window depicting them.[7]

Her mark, di Ego Godiva Comitissa diu istud desideravi, appears on a charter purportedly given by Thorold of Bucknall to the Benedictine monastery of Spalding. However, this charter is considered spurious by many historians.[8] Even so it is possible that Thorold, who appears in the Domesday Book as sheriff of Lincolnshire, was her brother.

After Leofric's death in 1057, his widow lived on until sometime beyond the Norman Conquest of 1066. She is mentioned in the Domesday survey as one of the few Anglo-Saxons and the only woman to remain a major landholder shortly after the conquest. By the time of this great survey in 1086, Godiva had died, but her former lands are listed, although now held by others.[9] Thus, Godiva apparently died between 1066 and 1086.[1]

The place where Godiva was buried has been a matter of debate. According to the Evesham Chronicle, she was buried at the Church of the Blessed Trinity at Evesham,[10] which is no longer standing. But, according to the authoritative account in the Oxford Dictionary of National Biography, "There is no reason to doubt that she was buried with her husband at Coventry, despite the assertion of the Evesham chronicle that she lay in Holy Trinity, Evesham."[1]

William Dugdale (1656) states that a window with representations of Leofric and Godiva was placed in Trinity Church, in Coventry,[11] about the time of Richard II. 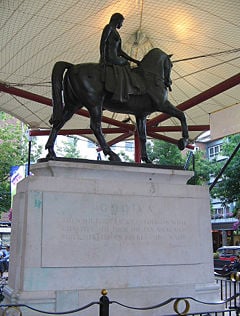 According to the popular story,[13][14] Lady Godiva took pity on the people of Coventry, who were suffering grievously under her husband's oppressive taxation. Lady Godiva appealed again and again to her husband, who obstinately refused to remit the tolls. At last, weary of her entreaties, he said he would grant her request if she would strip naked and ride through the streets of the town. Lady Godiva took him at his word and, after issuing a proclamation that all persons should keep within doors and shut their windows, she rode through the town, clothed only in her long hair. Only one person in the town, a tailor ever afterwards known as Peeping Tom, disobeyed her proclamation in one of the most famous instances of voyeurism.[15] In the story, Tom bores a hole in his shutters so that he might see Godiva pass, and is struck blind.[16] In the end, Godiva's husband keeps his word and abolishes the onerous taxes.

The oldest form of the legend has Godiva passing through Coventry market from one end to the other while the people were assembled, attended only by two knights. This version is given in a handwritten manuscript Flores Historiarum (meaning "Flowers of History") by Benedictine monk Roger of Wendover (d. 1236) from St. Albans. a somewhat gullible collector of anecdotes, who quoted from an earlier writer. The later story, with its episode of "Peeping Tom," appeared first among seventeenth century chroniclers. 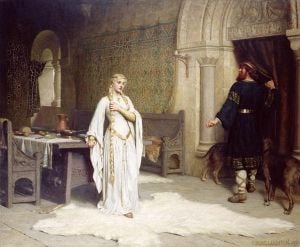 At the time, it was customary for penitents to make a public procession in only their shift, a sleeveless white garment similar to a contemporary slip. Thus, some scholars speculate, the Godiva legend may have originated from a trip through town as a penitent, in her shift. Godiva's story may have passed into folk history to be recorded in a romanticized version. Another theory has it that Lady Godiva's "nakedness" may refer to her riding through the streets stripped of her jewelery, the trademark of her upper class rank. However, both these attempts to reconcile known facts with legend are largely speculative; there is no known use of the word "naked" in the era of the earliest accounts to mean anything other than "without any clothing whatsoever."[17]

Moreover, there is no trace of any version of the story in sources contemporary with Godiva, a story that would certainly have been recorded even in its most tame interpretations. Additionally, with the founding of Coventry circa 1043, there was little opportunity for the city to have developed to an extent that would have supported such a noble gesture. Lastly, the only recorded tolls were on horses. Thus, it remains doubtful whether there is any historical basis for the famous ride.

Like the story of Peeping Tom, the claim that Godiva's long hair effectively hid her nakedness from sight is generally believed to have been a later addition (cf. Rapunzel). Certain other thematic elements are familiar in myth and fable: the resistant Lord (cf. Esther and Ahasuerus), the exacted promise, the stringent condition and the test of chastity. Even if Peeping Tom is a late addition, his being struck blind demonstrates the closely knit themes of the violated mystery and the punished intruder (cf. Diana and Actaeon).

In many university engineering faculties, military engineering corps and other engineering organizations, Lady Godiva is regarded as a mascot and called the "Patron Saint of Engineers" or "Goddess of Engineering." The origin is unclear, although it probably developed in Britain, where several early engineering schools were founded during the industrial revolution. The practice migrated to North America through Canadian schools, such as the University of Toronto which today holds an annual "Godiva Week" in January consisting of events intended to engender school spirit. By the mid-twentieth century, the practice of engineering organizations associating themselves with Lady Godiva was well established in the United States.

A particular tradition associated with this is that of drinking songs, which make reference to Lady Godiva, particularly Godiva's Hymn[20].

Historically, certain college organizations staged an annual "Godiva Ride" in which a naked female (or a costumed male) rode a horse across campus.[21] This practice may have declined with the advent of modern feminist attitudes.[22]

The plot of the Pietro Mascagni's opera Isabeau is based on the story of Lady Godiva.