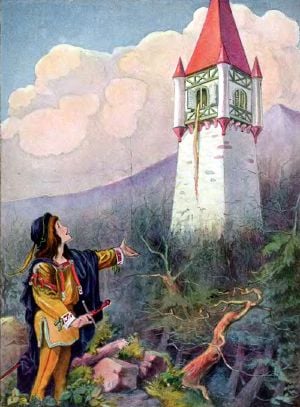 "Rapunzel" is a German fairy tale in the collection assembled by the Brothers Grimm, and first published in 1812 as part of Children's and Household Tales. The collection of more than 200 tales includes such well-known tales, such as Little Red Riding Hood, Little Snow White, Hansel and Gretel, Sleeping Beauty, Cinderella, and Rumpelstiltskin. Rapunzel is one of the best known fairy tales, and its plot has been used and parodied by many cartoonists and comedians, its best known line ("Rapunzel, Rapunzel, let down your hair") having entered popular culture.

Grimm's fairy tales, as they have come to be known, are among the most well-known narratives in the Western world. While no one is exactly sure when it originated, its themes reflect a Medieval culture of princes and Medieval superstitions as well. The enduring power of such stories is based on universal themes such as love lost and regained, and the power of good to overcome evil.

A childless couple who wanted a child lived next to a walled garden which belonged to an enchantress. The wife, as a result of her long-awaited pregnancy, noticed some rapunzel plant (or, in some versions[1] of the story, radishes or lamb's lettuce), planted in the garden and longed for it to the point of death. For two nights, the husband went out and broke into the garden to gather some for her; on the third night, as he was scaling the wall to return home, the enchantress, whose name is said to be "Dame Gothel," caught him and accused him of theft. He begged for mercy, and the old woman agreed to be lenient, on condition that the then-unborn child be surrendered to her at birth. Desperate, the man agreed. When a girl was born, the enchantress took her and raised her as a ward, naming her Rapunzel. When Rapunzel reached her twelfth year, the enchantress shut her away into a tower in the middle of the woods, with neither stairs nor door, and only one room and one window. When the witch went to visit Rapunzel, she stood beneath the tower and called out:

Rapunzel, Rapunzel, let down your hair, so that I may climb the golden stair. 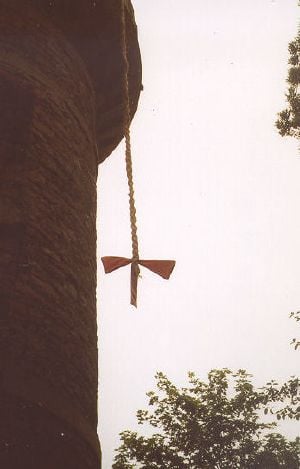 Rapunzel in the castle park in Ludwigsburg

Upon hearing these words, Rapunzel would wrap her long, fair hair around a hook that sat beside the window and drop it down to the enchantress, who would then climb up the hair to Rapunzel's tower room. A variation on the story also has the enchantress imbued with the power of flight and/or levitation and the young girl unaware of her hair's length.

One day, a prince rode through the forest and heard Rapunzel singing from the tower. Entranced by her ethereal voice, he went to look for the girl and found the tower, but was unable to enter. He then returned often, listening to her beautiful singing, and one day saw Dame Gothel visit, thus learning how to gain access to Rapunzel. When Dame Gothel was gone, he bade Rapunzel let her hair down. When she did this, he climbed up, made her acquaintance, and finally asked her to marry him. Rapunzel agreed.

Together they planned a means of escape, wherein he would come each night (thus avoiding the enchantress who visited her by day), and bring her silk, which Rapunzel would gradually weave into a ladder. Before the plan came to fruition, however, Rapunzel foolishly gave the prince away. In the first edition of Grimm's Fairy Tales, Rapunzel innocently asks why her dress was getting tight around her belly; in subsequent editions, she asks the witch (in a moment of forgetfulness) why it was easier for her to draw him up than her.[2] In anger, Dame Gothel cut short Rapunzel's braided hair and cast her out into the wilderness to fend for herself.

When the prince called that night, the enchantress let the severed braids down to haul him up. To his horror, he found himself staring at the witch instead of Rapunzel, who was nowhere to be found. When she told him in anger that he would never see Rapunzel again, he leapt from the tower in despair and was blinded by the thorns below.

For months he wandered through the wastelands of the country. One day, while Rapunzel sang as she fetched water, the prince heard Rapunzel's voice again, and they were reunited. When they fell into each other's arms, her tears immediately restored his sight. The prince led her to his kingdom, where they lived happily ever after.

The witch is called "Mother Gothel," a common term for a godmother in German.[3] She features as the overprotective parent, and interpretations often differ on how negatively she is to be regarded.[4]

Folkloric beliefs often regarded it as quite dangerous to deny a pregnant woman any food she craved. Family members would often go to great lengths to secure such cravings. [5] Such desires for lettuce and like vegetables may indicate that the folkloric traditions are based on a nutritional need for vitamins.[6]

The uneven bargain, on the other hand, is based on a narrative convention, not historical precedent. Such bargains are a common feature in fairy tales, creating a narrative problem that must be resolved in the course of the story. For example, in Jack and the Beanstalk, Jack trades a cow for beans, and in Beauty and the Beast, Beauty comes to the Beast in return for a rose.[7]

An influence on Grimm's Rapunzel was Petrosinella or Parsley, written by Giambattista Basile in his collection of fairy tales in 1634, Lo cunto de li cunti (The Story of Stories), or "Pentamerone." This tells a similar tale of a pregnant woman desiring some parsley from the garden of an ogress, getting caught, and having to promise the ogress her baby. The encounters between the prince and the maiden in the tower are described in quite bawdy language.[8]

About half a century later, in France, a similar story was published by Mademoiselle de la Force, called "Persinette." As Rapunzel did in the first edition of the Brothers Grimm, Persinette becomes pregnant because of the prince's visits.[9]

Italo Calvino included in his Italian Folktales a similar tale of a princess imprisoned in a tower, "The Canary Prince," though the imprisonment was caused by her stepmother's jealousy.

A German tale Puddocky also opens with a girl falling into the hands of a witch because of stolen food, but the person who craves it is the girl herself, and the person who steals it her mother. Another Italian tale, Prunella, has the girl steal the food and be captured by a witch.

Snow-White-Fire-Red, another Italian tale of this type, and Anthousa, Xanthousa, Chrisomalousa tell the story from the hero's point of view; he and the heroine escape the ogress, but have to deal with a curse after. 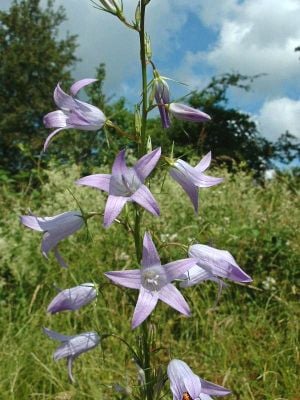 It is difficult to be certain which plant species the Brothers Grimm meant by the word "Rapunzel," but the following, listed in their own dictionary, are candidates.

Like many of Grimm's Fairy Tales, Rapunzel is a permanent part of Western culture and has been the subject of books, films, television programs and virtually every form of media. Andrew Lang included it in The Red Fairy Book, first published in 1890.[14] Another version of the tale also appears in A Book of Witches by Ruth Manning-Sanders.

Retrieved from https://www.newworldencyclopedia.org/p/index.php?title=Rapunzel&oldid=1090892
Categories:
Hidden category:
This page was last edited on 8 December 2022, at 00:39.
Content is available under Creative Commons Attribution/Share-Alike License; additional terms may apply. See Terms of Use for details.