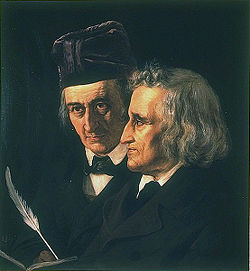 The Brothers Grimm (Brüder Grimm, in their own words, not Gebrüder—for there were five surviving brothers, among them Ludwig Emil Grimm, the painter) were Jacob and Wilhelm Grimm, Hessian professors who were best known for publishing collections of folk tales and fairy tales,[1] and for their work in linguistics, relating to how the sounds in words shift over time (Grimm's Law). The Brothers Grimm collected orally transmitted German tales and published the first series as Kinder- und Hausmärchen ("Children's and Household Tales") in 1812.

The Brothers Grimm were the first creators in this genre to present their stories as faithful renditions of direct folkloric materials, without attempting to render them as sophisticated stories. In so doing, they set the standard for the discipline of folklore studies. The concept of folklore developed as part of the nineteenth century ideology of romantic nationalism, leading to the reshaping of oral traditions to serve contemporary ideological goals. Thus Johann Gottfried von Herder advocated the deliberate recording and preservation of Germanic folklore to document the authentic spirit, tradition, and identity of the German people; the belief that there can be such authenticity became a chief tenet of romantic nationalism. Only in the twentieth century did ethnographers begin to attempt to record folklore without overt political goals.

Grimm's "fairy tales," as they have come to be known, are among the most famous in the Western world. Many of them reflect a simple spiritual truth, usually in the form of a single moral lesson. Their power is that the lessons are universal and simple, accessible to all, even children.

Jakob Ludwig Carl Grimm and Wilhelm Karl Grimm were born in 1785 and 1786, respectively, in Hanau near Frankfurt in Hesse. They were educated at the Friedrichs-Gymnasium in Kassel and later both read law at the University of Marburg.

The two brothers were in their early twenties when they began the linguistic and philological studies that would culminate in both Grimm's Law and their collected editions of fairy and folk tales. Though their collections of tales became immensely popular, they were essentially a byproduct of the linguistic research which was the Brothers' primary goal.

In 1830, they formed a household in Göttingen, where they were to become professors. 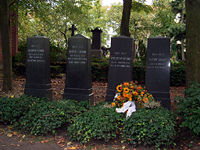 Graves of the Brothers Grimm in the St Matthäus Kirchhof Cemetery in Schöneberg, Berlin.

In 1837, the Brothers Grimm joined five of their colleague professors at the University of Göttingen to protest against the abolition of the liberal constitution of the state of Hanover by King Ernest Augustus I of Hanover. This group came to be known in the German states as Die Göttinger Sieben (The Göttingen Seven). Invoking their right to resist on reasons of natural and constitutional justice, they protested against the King's hubris in abrogating the constitution. For this, all professors were fired from their university posts and some even deported. Though politically divided by borders of duchies and kingdoms at that time, public opinion and academia in the German realms almost unanimously supported the Grimms and their colleagues against the monarch.

Wilhelm died in 1859; his elder brother Jacob died in 1863. They are buried in the St. Matthäus Kirchhof Cemetery in Schöneberg, Berlin. The Grimms helped foment a nationwide democratic public opinion in Germany and are cherished as the progenitors of the German democratic movement, whose Revolutions of 1848 and 1849 were brutally crushed by the Kingdom of Prussia, where a constitutional monarchy was established.

The Brothers Grimm began collecting folk tales[2] around 1807, in response to a wave of interest awakened in German folklore following the publication of Ludwig Achim von Arnim and Clemens Brentano's folksong collection, Des Knaben Wunderhorn ("The Boy's Magic Horn"), 1805-1808. By 1810 the Grimms produced a manuscript collection of several dozen tales, which they had recorded by inviting storytellers to their home and transcribing their stories.

In 1812, the Brothers published a collection of 86 German fairy tales in a volume titled Kinder- und Hausmärchen (Children's and Household Tales). They published a second volume of 70 stories in 1814 ("1815" on the title page), which together make up the first edition of the collection, containing 156 stories. A second edition followed in 1819-1822, expanded to 170 tales. Five more editions were issued during the Grimms' lifetimes (Two volumes of the second edition were published in 1819, with a third volume in 1822. The third edition appeared in 1837; fourth edition, 1840; fifth edition, 1843; sixth edition, 1850; seventh edition, 1857. All were of two volumes, except for the three-volume second edition),[3] in which stories were added or subtracted, until the seventh edition of 1857 contained 211 tales, although it has long been recognized that many of these later-added stories were derived from printed rather than oral sources. 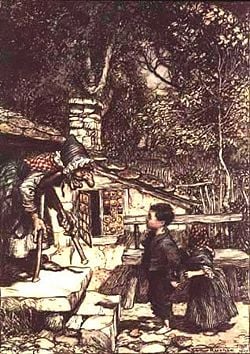 An illustration of Hansel and Gretel by Arthur Rackham.

These editions, equipped with scholarly notes, were intended as serious works of folklore. The Brothers also published the Kleine Ausgabe or "small edition," containing a selection of 50 stories expressly designed for children (as opposed to the more formal Grosse Ausgabe or "large edition"). Ten printings of the "small edition" were issued between 1825 and 1858.

The Grimms were not the first to publish collections of folktales. The 1697 French collection by Charles Perrault is the most famous, though there were various others, including a German collection by Johann Karl August Musäus published in 1782-7. The earlier collections, however, made little pretense to strict fidelity to sources. The Brothers Grimm were the first workers in this genre to present their stories as faithful renditions of the kind of direct folkloric materials that underlay the sophistications of an adapter like Perrault. In so doing, the Grimms took a basic and essential step toward modern folklore studies, leading to the work of folklorists like Peter and Iona Opie[4] and others.

A century and a half after the Grimms began publishing, however, a sweeping, skeptical, and highly critical re-assessment disproved the Grimms' basic claims about their work.[5] The Brothers did not in fact use exclusively German sources for their collection; and far from maintaining fidelity to those sources, they rewrote and revised and adapted their stories, just as Perrault and their other predecessors had done. The different printed versions of the tales display the latter fact; and the 1810 manuscripts, published in 1924, 1927, and 1974, accentuate the Brothers' consistent habit of changing and adapting their original materials. The irony is that the Brothers Grimm helped create a serious scholarly discipline that they themselves did not practice.

In fairness, it should be noted that the Grimms' method was common in their historical era. Arnim and Brentano edited and adapted the folksongs of Des Knaben Wunderhorn; in the early 1800s. Brentano collected folktales in much the same way as the Grimms.[6] The good academic practices violated by these early researchers had not yet been codified in the period in which they worked. The Grimms have been criticized for a basic dishonesty, for making false claims about their fidelity—for saying one thing and doing another;[7] whether and to what degree they were deceitful, or self-deluding, is perhaps an open question. It should be noted, however, that many scientific disciplines have been begun by researchers who opened up fields of inquiry for those who would come to ultimately question the methods of these pioneers.

In the very early nineteenth century, the time in which the Brothers Grimm lived, the Holy Roman Empire had just met its fate, and Germany as it is known today did not yet exist; it was comprised of hundreds of principalities and small or mid-sized countries. The major unifying factor for the German people of the time was a common language. There was no significant German literary history, so part of what motivated the Brothers in their writings and in their lives was the desire to help create a German identity.

Less well known to the general public outside Germany is the Brothers' work on a German dictionary, the Deutsches Wörterbuch. Indeed, the Deutsches Wörterbuch was the first major step in creating a standardized "modern" German language since Martin Luther's translation of the Bible to German. It represented a very extensive (33 volumes, weighing 84 kg) standard reference for German etymology, remaining so to this day.

Jacob is recognized for enunciating Grimm's law, the Germanic Sound Shift that was first observed by the Danish philologist Rasmus Christian Rask. Grimm's law was the first non-trivial systematic sound change ever to be discovered.

Between 1990 and the 2002 introduction of the euro currency in Germany, the Grimms were depicted on the 1000 Deutsche Mark note—the largest available denomination.

Selection of fairy tales by the Brothers Grimm

Retrieved from https://www.newworldencyclopedia.org/p/index.php?title=Brothers_Grimm&oldid=1064770
Categories:
Hidden category:
This page was last edited on 11 February 2022, at 13:58.
Content is available under Creative Commons Attribution/Share-Alike License; additional terms may apply. See Terms of Use for details.