Carolina, Baroness Nairne (August 16, 1766 – October 26, 1845), Scottish songwriter, was born in the auld hoose of Gask, Perthshire to Jacobite parents. Throughout her lifetime, she wrote various poems and songs, which she kept a secret from everyone in her life, including her husband, WM Nairne. Her works have been praised for their vivacity and eloquent style, and were often published under the pseudonym of "BB" during her lifetime mainly because it was not socially acceptable for women to write poetry at that time. She loved the Scottish countryside. She died in her family's home on October 26, 1845, at the age of seventy-nine. Her songs are said to be second only to those of Robert Burns in popularity.[1] Her legacy is also important because she adapted popular melodies and helped by so doing to preserve much of Scotland's musical heritage, which would otherwise have been lost.

Lady Nairne was born as Carolina Oliphant on August 16, 1766, in the "auld hoose" of Gask, in Perthshire. Her father, Laurence Oliphant, was one of the foremost supporters of the Jacobin cause, and she was named Carolina in memory of Prince Charles Edward. "Carolina" is the female form of the name "Charles." Both of her parents descended from strong Jacobite families, and could trace their family, the Oliphants, back to owning the estates in the area since the thirteenth century. Although her father, Laurence Oliphant went into exile for a time after the Battle of Culloden, his lands confiscated by the Government, his family purchased them for him out of sympathy and heritage duty to the land. Coincidentally, her mother's family, the Robertsons of Struan, had forfeited and regained their lands for the same reason. 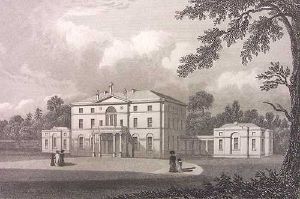 Gask House, re-built 1801-05 for Laurence Oliphant. There is a monument to Lady Carolina Nairne on the grounds.

Throughout her childhood and early adulthood, Lady Carolina became known for her great beauty. In the schoolroom, she was known as "pretty Miss Car," and afterwards her striking beauty and pleasing manners earned for her the name of the "Flower of Strathearn." Her father tried to allow for her, along with her siblings, to have a proper education, even though at the time, women were usually not offered such. Through her lessons, she began to write poetry, which mimicked lyrics of traditional country songs, and replaced their romantic notions with very crude words and ideals. Some of these poems she gave a strong Jacobin slant, in order to help keep up the spirits of her ailing father and her uncle, the clan chief of the Robertsons of Struan. Among her Jacobin pieces were the poems which were later turned into songs, Wha'll be King but Charlie?, Charlie is my darling, The Hundred Pipers, He's owre the Hills, and Bonnie Charlie's noo awa. Other songs that she is accredited with include The Rowan Tree and The Pentland Hills, and the poem The Auld House, simply recorded her feelings about the Scottish countryside.

On June 2, 1806, Carolina Oliphant, at 41 years old, married her second cousin, WM Nairne, who became Baron Nairne in 1824. William Murray Nairne (1757-1830) was descended from Sir Robert Nairne of Strathord (1620-1683), a supporter of Charles II, who was named Baron Nairne in 1681. After his death and without issue, the barony passed his son-in-law, Lord William Murray (c. 1665-1726), the husband of his only daughter Margaret (1669-1747) and a younger son of John Murray, the first marquess of Athole. William, who took the name of Nairne and became the second Baron Nairne, joined the standard of the Jacobites in 1715. He was then taken prisoner at the Battle of Preston and was sentenced to death. He was, however, pardoned of these charges, but his title of Baron Nairne was forfeited. His son, John (c. 1691-1770), who but for this forfeiture, would have been the third Baron Nairne, was also taken prisoner at Preston, but he was soon set at liberty as well.

In the rising of 1745, he was one of the Jacobite leaders present at the battles of Prestonpans, of Falkirk and of Culloden, and consequently he was attained in 1746. However, he escaped to France and his son, John (d. 1782) was the father of William Murray Nairne, who was restored to the barony of Nairne in 1824, making him the first baron. With her husband, Major William Murray Nairne, Carolina moved to Edinburgh, where they lived until his death in 1830. Carolina kept her poetry and songwriting secret from her new husband and others in her life, and adopted the pseudonym of "BB," short for Mrs Bogan of Baron. When her work appeared as part of a major collection published in Edinburgh under the title of The Scottish Minstrel between 1821 and 1824, Carolina even tried to keep her true identity secret from the collection's editor, R.A. Smith. After her husband's death in 1830, she took up her residence at Enniskerry, Co. Wicklow, Ireland, but she spent much time abroad.

Lady Nairne returned to her family's home, Gask House in 1843, and died on October 26, 1845, at seventy-nine years old. In the year after her death, Carolina's sister published a posthumous collection of Carolina's verse and song, entitled Lays of Strathearn. This collection marks the first time that Carolina, Lady Nairne, was publicly identified as the author of the 87 songs and poems included. 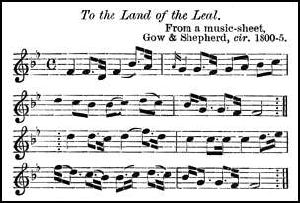 Sheet Music for "To the Land of the Leal," written by Lady Nairne between 1797 and 1798 following the death of a friend's child.

The content and style of the poems and songs that she wrote are generally classified into three different groups:

Her works are thought to contain human emotion and vivacity, with genuine pathos and bright wit that were not surpassed by many in her lifetime.

Lady Carolina Nairne is not nearly as well known as she might be, and is not even identified along with some of her songs. This is partly due to the need she felt to keep her writing secret during her life, so it did not interfere with her position in society. However, her verse and style are thought to be superior to most other female writers during her time period, and the collection of various poems that she wrote during her lifetime depict life for Scottish women in the eighteenth and nineteenth centuries.

Retrieved from https://www.newworldencyclopedia.org/p/index.php?title=Lady_Carolina_Nairne&oldid=1083254
Categories:
Hidden category:
This page was last edited on 21 October 2022, at 22:46.
Content is available under Creative Commons Attribution/Share-Alike License; additional terms may apply. See Terms of Use for details.