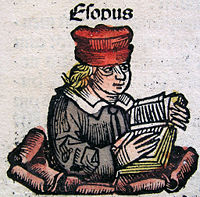 Depiction of Aesop from the Nuremberg Chronicle. Published in 1493.

A fable is a succinct story, in prose or verse, that employs the literary device, anthropomorphism - that is giving animals, plants, inanimate objects, or forces of nature, human attributes while expressing a simple moral or lesson. Examples abound in fables of talking animals that are whimsical, wise, or foolish creatures mimicking human faults and foibles. A fable's moral lesson, sometimes must be inferred, but at other times it is expressed at the end of the story with a pithy saying or maxim. Often a fable will have a "twist" or a surprise ending as well.

Fables, fairy tales, and parables all have in common the fact that they were handed down as an oral form of storytelling, sometimes recorded in writing much later than their time of actual creation. In such cases we might find traces of the historical record of traditions, beliefs and rites from bygone eras.[1] While fairy tales have fantastical elements, fables generally do not. Unlike fables, parables do not employ anthropomorphism, but rather characterize humans as they are.

Fables, whether ancient or modern, have been used to satirize social and political institutions of their day. An example of a modern day fable critiquing a social order would be George Orwell's Animal Farm (communism); one commenting on modern social mores is Richard Bach's Jonathan Livingston Seagull; Hans Christian Andersen's satirization of royalty in the nineteenth century with The Emperor's New Clothes is another. And The Wonderful Wizard of Oz written in 1900 by L. Frank Baum has the fantastical traits of a fairy tale (witches that fly, etc.) but it is also part fable having at least one anthropomorphic character (Cowardly Lion) and a moral at the end (There is no place like home).

A fable, while usually written as a child's story, conveys a simple lesson that can be appreciated by readers of all ages. Fables, both enjoyable and fun to read, can be an important part of a child's moral education especially when shared between parents and children.

The word "fable" comes from the Latin "fabula" (a "story"). An author of fables is termed a fabulist. The word "fabulous," which comes from the word 'fable' now has a secondary meaning in the context of fables, and is more informally used to mean, 'superb' or 'exceptional'.

"One hot summer's day a Fox was strolling through an orchard till he came to a bunch of Grapes just ripening on a vine which had been trained over a lofty branch. "Just the thing to quench my thirst," quoth he. Drawing back a few paces, he took a run and a jump, and just missed the bunch. Turning round again with a One, Two, Three, he jumped up, but with no greater success. Again and again he tried after the tempting morsel, but at last had to give it up, and walked away with his nose in the air, saying: "I am sure they are sour."

The moral of the story, that you cannot always have what you want is summed up by the expression, "sour grapes," a common idiomatic expression that resonates with most English speakers. The fable's lesson holds universal appeal and most readers can recognize that the fox's attitude is a common human failing.

In time each animal became symbolic of one outstanding vice or virtue—for example the owl was wise, the ass was stupid, the fox cunning, the wolf cruel, the pig greedy, the peacock proud, and the lion brave. So the fable was born as a vehicle for conveying simple moral truths.[3] 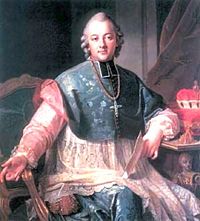 Bread and Sword from his most noted work Fables and Parables.

"As the bread lay next to the sword, the weapon demurred:
"You would certainly show me more respect if you heard
How by night and by day I conscientiously strive
So that you may safely go on keeping men alive."
"I know," said the bread, "the shape of your duty's course:
You defend me less often than you take me by force."

Many of Krasicki's fables provided political and satirical commentary prior to the Polish-Lithuanian Commonwealth partitioning by Russia, Prussia and Hapsburg Austria in the mid-eighteenth century.

Divinities may also appear in fables as active agents. Aesop's Fables feature most of the Greek pantheon, including Zeus and Hermes.[4]

An example of one of these fables is the following tale of Hermes:

Hermes wanted to know how much people valued him, so he assumed a human form and went into a sculptor's workshop. He saw there a statue of Zeus and he asked how much it cost. The man said that it cost a drachma. Hermes smiled, and asked how much the statue of Hera would be. The man named a still higher price. When Hermes saw a statue of himself, he expected that he would be reckoned at an even higher price, since he delivered the messages of the gods and brought profit to mankind. But when he asked how much the statue of Hermes would cost, the sculptor replied, 'If you buy those other two, I'll throw this one in for free!' 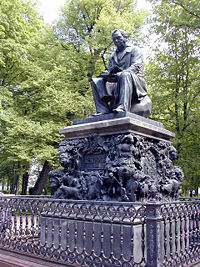 The fable is one of the most enduring forms of folk literature, and can be found in the literary canon of almost every country.

Comparable fables can be found across civilizations such as those from ancient Sumer, and Akkadia which may have formed the basis for Egypt's Middle Kingdom and the Hebrew's own body of written works. Familiar Hebrew fables can be found in the Book of Judges Chapter 9 and in II Kings 14:9 in the stories of the "king of trees" and "the thistle and the cedar tree" respectively.[5]

Most fables popular in present day Western countries can be traced back to ancient Greece and India. The majority of the Greek fables are credited to the legendary Aesop, of whom little is known except that he was most likely a slave and that he was a very prolific writer. Some of Aesop's fables may have come from several ancient sources and some of the stories seem to have originated in India during the first millennium B.C.E.

Many Indian tales, told as frame stories - that is a 'story within a story,' - include Vishnu Sarma's Panchatantra, one of the best known collection of Indian fables. Indian epics such as Krishna Dwaipayana Vyasa's Mahabharata and Valmiki's Ramayana also contained fables within the main story, often told as side stories or back-story. Some of these stories had reached the West by the start of the Christian era and were included in early collections of Aesop's fables.

Epicharmus of Kos, the Greek philosopher and dramatist, is often credited with having been among the first to invent comic fables.[6] 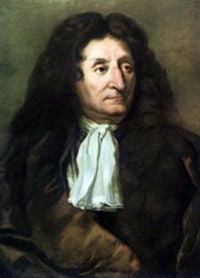 The French fabulist and poet Jean de La Fontaine (1621-1695) retold the ancient fables by recasting them in eloquent prose and updated themes. La Fontaine used the literary form of the fable to create a satirical social critique of the political and social problems of the Ancien Régime under French aristocracy. Fontaine, whose fables were written mainly for adults, have long been enjoyed by French children. His endearing stories like La Cigale et la Fourmi (The Cricket and the Ant) and Le Corbeau et le Renard (The Crow and the Fox) remain classics today.[7]

In modern times the fable as a literary form has been adapted to adult literature. For instance, James Thurber used the style in his books, Fables for Our Time and The Beast in Me and Other Animals. His fables are noted for their stinging portrayal of the anxieties of modern life.[8] George Orwell's Animal Farm satirizes Stalinist Communism in particular, and totalitarianism in general, in the guise of an animal fable. The Irish novelist James Joyce wove "The Fox and the Grapes" and "The Ant and the Grasshopper" into Finnegans Wake. The fables help create a mood of fantasy that characterizes this novel.[9] 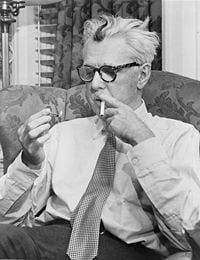