Ambrose Gwinnett Bierce (June 24, 1842 – 1913) was an American editorialist, journalist, short-story writer, and satirist, today best known for his Devil's Dictionary, which lampooned, among other things, religion and politics.

Bierce's lucid, unsentimental style has kept him popular when many of his contemporaries have been consigned to oblivion. His dark, sardonic views and vehemence as a critic earned him the nickname, "Bitter Bierce." His views belied a pessimism regarding human nature. Such was his reputation that it was said his judgment on any piece of prose or poetry could make or break a writer's career. Among the younger writers whom he encouraged were the poet George Sterling and the fiction writer W. C. Morrow. 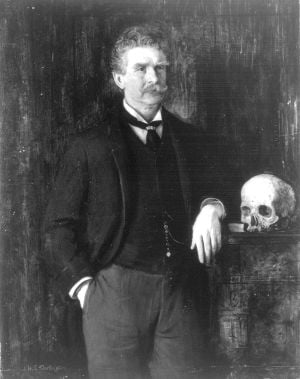 Bierce was born in rural Meigs County, Ohio, and grew up in Kosciusko County, Indiana, attending high school at the county seat of Warsaw.

He was the tenth of 13 children, whose father, Marcus Aurelius Bierce (1799-1876), gave all of them names beginning with the letter "A." In order of birth, the Bierce siblings were Abigail, Amelia, Ann, Addison, Aurelius, Augustus, Almeda, Andrew, Albert, Ambrose, Arthur, Adelia, and Aurelia. His mother, Laura Sherwood, was a descendant of William Bradford.

At the outset of the American Civil War, Bierce enlisted in the Union Army's 9th Indiana Volunteer Infantry. In February 1862, he was commissioned first lieutenant, and served on the staff of General William Babcock Hazen as a topographical engineer, making maps of likely battlefields. Bierce fought at the Battle of Shiloh (April 1862), a terrifying experience that became a source for several later short stories and the memoir, What I Saw of Shiloh.,.

He continued fighting in the Western theater, at one point receiving newspaper attention for his daring rescue, under fire, of a gravely wounded comrade at the Battle of Rich Mountain, West Virginia. In June 1864, he sustained a serious head wound at the Battle of Kennesaw Mountain, and spent the rest of the summer on furlough, returning to active duty in September. He was discharged from the army in January 1865.

His military career resumed, however, when in the summer of 1866 he rejoined General Hazen as part of the latter's expedition to inspect military outposts across the Great Plains. The expedition proceeded by horseback and wagon from Omaha, Nebraska, arriving toward year's end in San Francisco, California.

Both of Bierce's sons predeceased him: Day was shot in a brawl over a woman, and Leigh died of pneumonia related to alcoholism.

Bierce separated from his wife in 1888, after discovering compromising letters to her from an admirer, and the couple finally divorced in 1904. Mollie died the following year.

In San Francisco, Bierce received the rank of brevet major before resigning from the Army. He remained in San Francisco for many years, eventually becoming famous as a contributor and/or editor for a number of local newspapers and periodicals, including The San Francisco News Letter, The Argonaut, and The Wasp. Bierce lived and wrote in England from 1872 to 1875, contributing to Fun magazine. Returning to the United States, he again took up residence in San Francisco. In 1879–1880, he went to Rockerville and Deadwood, South Dakota, in the Dakota Territory, to try his hand as local manager for a New York mining company, but when the company failed he returned to San Francisco and resumed his career in journalism. In 1887, he became one of the first regular columnists and editorialists to be employed on William Randolph Hearst's newspaper, the San Francisco Examiner, eventually becoming one of the most prominent and influential among the writers and journalists of the West Coast. In December 1899, he moved to Washington, D.C., but continued his association with the Hearst Newspapers until 1906.

The Union Pacific and Central Pacific railroad companies had received massive loans from the U.S. government to build the First Transcontinental Railroad—on gentle terms, but Collis P. Huntington persuaded a friendly member of Congress to introduce a bill excusing the companies from repaying the money, amounting to $130 million (nearly 3 billion dollars in 2007 money). In January 1896, Hearst dispatched Bierce to Washington, D.C. to foil this attempt. The essence of the plot was secrecy; the railroads' advocates hoped to get the bill through Congress without any public notice or hearings. Bierce's main effort was therefore publicity. His diatribes on the subject aroused such public wrath that the bill was defeated. Bierce returned to California in November.

Because of his penchant for biting social criticism and satire, Bierce's long newspaper career was often steeped in controversy. On several occasions, his columns stirred up a storm of hostile reaction which created difficulties for Hearst. One of the most notable of these incidents occurred following the assassination of President William McKinley when Hearst's opponents turned a poem Bierce had written about the assassination of Governor Goebel in 1900 into a cause célèbre. Bierce meant his poem, written on the occasion of the assassination of Governor William Goebel of Kentucky, to express a national mood of dismay and fear, but after McKinley was shot in 1901 it seemed to foreshadow the crime:

"The bullet that pierced Goebel's breast
Can not be found in all the West;
Good reason, it is speeding here
To stretch McKinley on his bier."

Hearst was thereby accused by rival newspapers—and by then Secretary of State Elihu Root—of having called for McKinley's assassination. Despite a national uproar that ended his ambitions for the presidency (and even his membership in the Bohemian Club), Hearst neither revealed Bierce as the author of the poem, nor fired him. 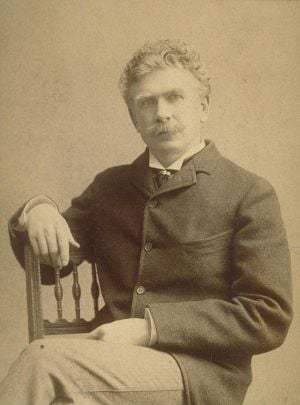 His short stories are considered among the best of the nineteenth century, providing a popular following based on his roots. He wrote realistically of the terrible things he had seen in the war in such stories as "An Occurrence at Owl Creek Bridge," "Killed at Resaca," and "Chickamauga."

Bierce was reckoned a master of "Pure" English by his contemporaries, and virtually everything that came from his pen was notable for its judicious wording and economy of style. He wrote skillfully in a variety of literary genres, and in addition to his celebrated ghost and war stories he published several volumes of poetry and verse. His Fantastic Fables anticipated the ironic style of grotesquerie that turned into a genre in the twentieth century.

One of Bierce's most famous works is his much-quoted book, The Devil's Dictionary, originally an occasional newspaper item which was first published in book form in 1906 as The Cynic's Word Book. It offers an interesting reinterpretation of the English language in which cant and political double-talk are neatly lampooned.

Under the entry "leonine," meaning a single line of poetry with an internal rhyming scheme, he included an apocryphal couplet written by the apocryphal Bella Peeler Silcox (Ella Wheeler Wilcox) in which an internal rhyme is achieved in both lines only by mispronouncing the rhyming words:


Bierce's twelve-volume Collected Works were published in 1909, the seventh volume of which consists solely of The Devil's Dictionary, the title Bierce himself preferred to The Cynic's Word Book.

In October 1913, the septuagenarian Bierce departed Washington, D.C., for a tour of his old Civil War battlefields. By December he had proceeded on through Louisiana and Texas, crossing by way of El Paso into Mexico, which was in the throes of revolution. In Ciudad Juárez, he joined Pancho Villa's army as an observer, and in that role participated in the battle of Tierra Blanca.

Bierce is known to have accompanied Villa's army as far as Chihuahua, Chihuahua. After a last letter to a close friend, sent from there December 26, 1913, he vanished without a trace, becoming one of the most famous disappearances in American literary history. Investigations into his fate proved fruitless, and despite an abundance of theories his end remains shrouded in mystery. The date of his death is generally cited as "1914." Gringo viejo, a novel by Carlos Fuentes on which the film "Old Gringo" was based, re-imagines the last months and the death of Ambrose Bierce.

In one of his last letters, Bierce wrote:

"Good-bye—if you hear of my being stood up against a Mexican stone wall and shot to rags please know that I think that a pretty good way to depart this life. It beats old age, disease, or falling down the cellar stairs. To be a Gringo in Mexico—ah, that is euthanasia."

At least three films have been made of Bierce's story "An Occurrence at Owl Creek Bridge." A silent film version was made in the 1920s. A French version called La Rivière du Hibou, directed by Robert Enrico, was released in 1962. This is a black and white film, faithfully recounting the original narrative using voice-over. Another version, directed by Brian James Egan, was released in 2005. The 1962 film was also used for an episode of the television series The Twilight Zone: "An Occurrence at Owl Creek Bridge." The presentation was rare for commercial television in that it was offered without commercial interruption. A copy of "An Occurrence at Owl Creek Bridge" appeared in the ABC television series Lost ("The Long Con," airdate February 8, 2006). Previous to The Twilight Zone, the story had been adapted as an episode of Alfred Hitchcock Presents.

Lorin Morgan-Richards, a Los Angeles based writer and dark electro artist, wrote and produced an album and modern dance performance in 2001, entitled An Occurrence Remembered. This work was based on Ambrose Bierce's Civil War short stories, "An Occurrence at Owl Creek Bridge" and "Chickamauga." An Occurrence Remembered premiered in New York City under the choreography of Nicole Cavaliere, and co-production of Valerie Stoneking.