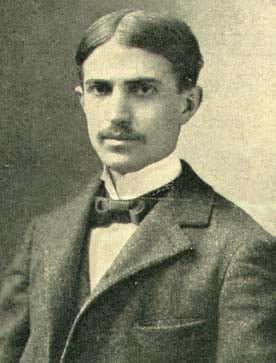 Stephen Crane (November 1, 1871 - June 5, 1900) was an American novelist, poet, and journalist who is now considered to be one of the most important writers in the vein of American realism. In fiction, Crane pioneered a naturalistic and unsentimental style of writing that was strongly influenced by Crane's experiences as a journalist. Crane's most well-known work, The Red Badge of Courage, is almost universally considered to be the first great novel of the American Civil War, due in part to its ability to describe the experience of warfare in vivid, psychological detail. Crane's other major novel, Maggie: A Girl of the Streets, was less popular in its time, but it too is now esteemed as one of the most vivid portrayals of lower-class life in nineteenth century Manhattan in all of American literature. Crane's focus on realistic stories, which often ended tragically and without a clear sense of resolution, were contrary to the Romantic tastes of his times, and it would not be until the next generation of American realists, such as Theodore Dreiser and Frank Norris, that Crane's immense influence on the development of American literature would become fully apparent.

In addition to his fiction, Crane was also the author of some of the most unusual poetry in all of nineteenth century English literature. Written in free verse and focusing on paradoxical, almost dream-like images, Crane's poetry endures as one of the most unique contributions to the American canon. On the whole, Crane, despite his tragically short life and small overall output, is one of the most important American writers of the late nineteenth century.

By the age of 16, Crane was assisting his brother Townley in writing articles about the New Jersey shore for local papers and The New York Tribune. Crane studied at Lafayette College and Syracuse University. After his mother's death in 1890—his father had died earlier—Crane moved to New York City, where he lived a bohemian life working as a freelance writer and journalist.

While supporting himself through his journalism, Crane became aware of the plight of the poor in the Bowery slums of Manhattan. He would spend a great deal of time in the Bowery in order to conduct research for his first novel, Maggie: A Girl Of The Streets (1893), which was a milestone in the development of literary naturalism. The novel describes its titular protagonist, a young woman from the Bowery who is gradually forced, for financial reasons, into an increasingly disreputable life of crime and prostitution that ultimately concludes with her suicide. Because of the novel's shocking content Crane was forced to print the book at his own expense with money derived from the sale of his mother's house. Aware that the book's unflinching depiction of New York's mean streets might attract controversy, Crane released the book under the pseudonym, Johnston Smith. It was in Maggie that readers were first introduced to Crane's writing style, noted for his use of a method that has come to be known as "naturalism," in which characters face very realistic and often bleak circumstances described in exacting and realistic detail. Maggie was not a commercial success and was ignored by critics of the time, with the exception of the author Hamlin Garland, who would introduce Crane to the influential editor and author, William Dean Howells.

The Red Badge of Courage and literary success

Encouraged by Garland and Howells, Crane immediately began writing another novel, this time on the subject of the American Civil War. Crane had been born after the War, and to compound matters he had never experienced battle first-hand; yet, committed to his project, Crane tirelessly interviewed veterans of the war in order to perfectly capture the experience of combat. His writing is notable for its detached and critical style, often addressing uncomfortable issues on a deeply psychological level in a way that was ground-breaking in the genre. Though Crane never names the battle in which Fleming participates, most critics believe that its events closely parallel those of the Battle of Chancellorsville, in 1863, one of the most disastrous Union defeats in all of the war. In 1895, Crane published The Red Badge of Courage, and almost overnight the novel won international acclaim for its realism and psychological depth in telling the story of a young soldier facing the horrors and triumphs of warfare for the first time.

The Red Badge of Courage recounts the story of Henry Fleming, a young and plucky recruit in the Union Army. The novel begins in 1863, just as Henry's unit is about to engage in the battle. As Henry and his comrades prepare for battle, he eagerly anticipates his first sight of real combat. Upon meeting a group of veterans, Henry is particularly impressed by one man's open wound, which he fixates on and refers to as a "red badge of courage." As the battle is about to begin, Henry expresses his hope that he too might have a badge courage like that of the wounded man. Crane uses colors to represent various moods or relationships in the book. They often change with Henry's mood. A river will be a dark blue, then will look just like a sapphire, and the sun will look like a sick yellow, transformed into gold.

As soon as the battle begins, however, with the unglamorous chaos of war raging all around him, Henry panics and flees the battlefield, utterly unable to cope with the realities of war. The remainder of the short novel follows Henry's psychological transformation as he wanders in the forest away from the battle, feeling intense shame for his cowardice. Ultimately, Henry realizes that he must fight for something higher than mere glory; he returns to the battlefield, where he shows true valor and earns a genuine badge of courage.

Because his depictions of the psychological as well as military aspects of war were so compelling and accurate, Crane was hired shortly after the novel's publication by the New York Journal as a war-correspondent. In early January 1897, Crane set off for Cuba in order to report on the Cuban War of Independence. Halfway through the voyage, the ship Crane was traveling on sank, leaving Crane adrift for 30 hours in a ten-foot dinghy. He recounted these experiences in The Open Boat and Other Tales (1898). The Open Boat remains one of the most frequently anthologized of all American short-stories.

In 1897, Crane settled in England, where he befriended writers Joseph Conrad and Henry James. Although he was only 26, he was already suffering from the tuberculosis which would rapidly claim his life. His last years would be spent in alternating periods of painful convalescence and ecstatic activity. Shortly before his death, he released a second volume of short-stories, Whilomville Stories in 1900, which would go on to be one of the most commercially successful of the twelve books he wrote. Although Crane never married he had an extended relationship with Cora Taylor (1865-September 4, 1910), a woman of dubious background who may have been connected with prostitution. It was Taylor who would convince Crane to settle in England, on a large estate in Sussex.

Crane died of at age 28, in Badenweiler, Germany. He is buried in Evergreen Cemetery in what is now Hillside, New Jersey.

Retrieved from https://www.newworldencyclopedia.org/p/index.php?title=Stephen_Crane&oldid=1030180
Categories:
Hidden category:
This page was last edited on 3 January 2020, at 23:23.
Content is available under Creative Commons Attribution/Share-Alike License; additional terms may apply. See Terms of Use for details.