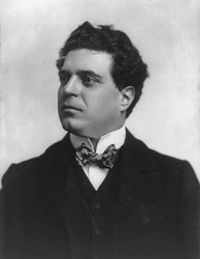 Pietro Mascagni (December 7, 1863 – August 2, 1945) was an Italian composer, most noted for his operas. His 1890 masterpiece, Cavalleria rusticana, caused one of the greatest sensations in opera history and singlehandedly ushered in the Verismo movement in Italian dramatic music. However, though it has been stated that Mascagni, like Leoncavallo, was a "one-opera man" who could never repeat his first success, this is inaccurate. L'amico Fritz and Iris have been popular in Europe since their respective premieres; in fact, Mascagni himself claimed that at one point Iris was performed in Italy more often than Cavalleria (Stivender). It is certainly a better vehicle for a popular lyric soprano.

Mascagni wrote a total of fifteen operas, plus an operetta, several orchestral and vocal works, as well as songs and piano music. He enjoyed immense success during his lifetime, both as a composer and conductor of his own and other people's music. If he never repeated the international success of Cavalleria, it was probably because Mascagni refused to copy himself. The variety of styles in his operas—the Sicilian passion and warmth of Cavalleria, the exotic flavor of Iris, the idyllic breeze that ventilates the charming L'amico Fritz and Lodoletta, the Gallic chiaroscuro of Isabeau, the steely, Veristic power of Il piccolo Marat, the overripe post-romanticism of the lush Parisina—demonstrate a versatility that none of the other Veristi could boast, Puccini included.

Pietro Antonio Stefano Mascagni was born in Livorno, Tuscany. He was the second son of Domenico and Emilia Mascagni. The father was the owner of a bakery. Mascagni's lifelong friend and collaborator, Giovanni Targioni-Tozzetti ("Nanni") was born the same year in Livorno.

In 1876, he began musical studies with Alfredo Soffredini (1854-1923), who founded the Istituto Musicale di Livorno (later called Istituto Cherubini) after having just completed his musical studies in Milan. Also from Livorno, Soffredini was a composer, teacher, and musical critic. Three years later, he composed several works: Sinfonia in do minore, Elegia, Kyrie, and Gloria and Ave Maria.

The premiere of Mascagni's first cantata, In Filanda, took place at the Istituto Cherubini on February 9, 1881. The cantata was presented at a musical contest in Milan and won the first prize. In the same year Mascagni met Arrigo Boito and Amilcare Ponchielli in Milan. In 1882, he composed the Cantata Alla Gioia, from a text by Schiller, La stella di Garibaldi, for voice and piano, and La tua stella. He later left Livorno for Milan and on October 12, Mascagni passed the admission examination of the Conservatorio di Milano. In Milan, Mascagni met the engineer Vittorio Gianfranceschi ("Vichi"), born in Vienna, in 1861, and Giacomo Puccini, born in Lucca in 1858. While studying at the school of music, the cantata In Filanda was renamed the Pinotta, and was proposed for the musical contest of the Conservatorio, but the registration, being late, was not accepted. Undeterred, Mascagni composed the Ballata for tenor and piano, M'ama non m'ama, scherzo for soprano and piano, Messagio d'amore, and Alla luna. In addition to composing, Mascagni conducted Il Re a Napoli in Cremona, a romance for tenor and orchestra, on a text by Andrea Maffei. Mascagni left Milan without completing his studies. He toured as conductor in the operetta companies of Vittorio Forlì, Alfonso, and Ciro Scognamiglio and, in Genova, the company of Luigi Arnaldo Vassallo. Mascagni later met the impresario Luigi Maresca, and after several contacts with him, Mascagni arrived in Cerignola with Maresca's company. He was accompanied by Argenide Marcellina Carbognani (Lina), his future wife. Helped by the mayor Giuseppe Cannone, Mascagni left the company of Maresca, not without problems, and became master of music and singing of the new philharmony of Cerignola, where he earned a lot of esteem. He also gave lessons for piano. Interested in religious music, work on the Messa di Gloria started. In 1889, Pietro and Lina got married and a few months later, the composition of Cavalleria rusticana was completed and the manuscript sent to Milan.

Mascagni was soon summoned to Rome to present his opera, and in May, the première of Cavalleria rusticana, winner of the Sonzogno contest, at the Teatro Costanzi in Rome, was performed. The success was tremendous, and very soon the opera was performed in Florence, Turin, Bologna, Palermo, Milan, Genoa, Naples, Venice, and Trieste. In December, Gustav Mahler conducted the opera in Budapest. Soon thereafter, the cities of Monaco, Hamburg, St. Petersburg, Dresden, and Buenos Aires welcomed the opera. In March 1891, it was played in Vienna. At age 26, Mascagni had become famous overnight. In October, the premier of L'amico Fritz at the Teatro Costanzi in Rome, was performed, and a month later, the premier. of I Rantzau at the Teatro La Pergola, in Florence, under the direction of Mascagni himself was presented. Another composition written at a later part of this period was Silvano. Mascagni had many premieres of his dramatic works, such as Guglielmo Ratcliff at the Teatro alla Scala of Milan, the première of Silvano at the Teatro alla Scala of Milan, he conducted the première of Zanetto at the Liceo and conducted the première of A Giacomo Leopardi, a symphonic poem, in Recanati. His last premier of this period was Iris, Mascagni's first collaboration with Luigi Illica, at the Teatro Costanzi in Rome.

Mascagni toured in Russia (Moscow and St. Petersburg) and premiered the opera Le maschere in six Italian theaters. When Giuseppe Verdi died, Mascagni commemorated his passing by conducting Verdi's Requiem in Vienna. Mascagni composed the music for Hall Caine's play, The Eternal City, and the première of the play took place in London. He toured in the United States (in particular New York City, Philadelphia, Boston, and San Francisco), where he conducted many of his and other composers' works. Soon after these tours, Mascagni left Pesaro after problems with the authorities and became director of the Scuola Musicale Romana, in Rome, and director of the Costanzi a few years later.

Mascagni soon ceased his activity of director of the Scuola Musicale Romana and left for Buenos Aires, beginning a 7 months tour in South America. The première of Isabeau took place in Buenos Aires. The Italian première of Isabeau took place simultaneously at La Scala in Milan (conductor Tullio Serafin) and at la Fenice in Venice (conductor Mascagni). He later began work on Parisina in Bellevue, near Paris, sometimes accompanied by his daughter Emi, his mistress Anna Lolli, and the librettist Gabrielle d'Annunzio. In December, the première of Parisina was held in Milan. Almost all the important Italian composers of the time were present, among them Puccini, Giordano and Zandonai. In 1914, with the beginning of World War I, Puccini and Mascagni were against the involvement of Italy in this war, where Mascagni's son Dino was later made a prisoner. The next year, Mascagni composed the music for Nino Oxilia's movie Rapsodia Satanica. A quarrel broke out regarding the rights of Louise de la Ramée's Two Little Wooden Shoes (I due Zoccoletti), that inspired both Puccini and Mascagni. The subject was retained by Mascagni for the opera Lodoletta, which was premiered in Rome, in 1917.

Mascagni continued composing alongside his administrative duties and wrote Il piccolo Marat. It was premiered in Rome and Buenos Aires, the latter location marked the beginning of a South American tour. In 1927, Mascagni moved to the Albergo Plaza in Rome, a place he did not leave until his death.

Mascagni conducted La Bohème in Torre del Lago, an homage to Puccini, who had died. During this period, Mascagni formally became an official member of the PNF (Fascist party). Like many contemporary musicians, including Puccini and Giordano, Mascagni joined the party. This political connection aided his premieres of Pinotta in San Remo, the premier of Nerone in Milan, and another premier in Livorno.

There was a rousing celebration of the fifty years of Cavalleria rusticana, and the opera was recorded in a studio under the direction of Mascagni. His last public appearance was at La Scala for L'amico Fritz in 1943. Mascagni died in 1945.

Retrieved from https://www.newworldencyclopedia.org/p/index.php?title=Pietro_Mascagni&oldid=1089022
Categories:
Hidden category:
This page was last edited on 24 November 2022, at 05:28.
Content is available under Creative Commons Attribution/Share-Alike License; additional terms may apply. See Terms of Use for details.