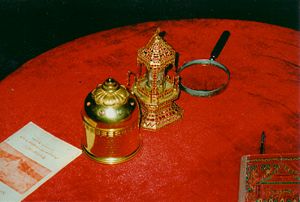 A relic (from Latin: reliquiae meaning 'remains') is a venerated object of religious and/or historical significance, often the human remains of an important religious figure, or a sacred item, carefully preserved as a tangible memorial. Relics are an important aspect of many religions including Buddhism, some denominations of Christianity, Hinduism, shamanism, and many other personal belief systems. A reliquary is a shrine that houses one or more relics.

A relic is also the term for something that has survived the passage of time, especially an object or custom whose original culture has disappeared, but also an object cherished for historical value (such as a keepsake or heirloom).

At Athens the supposed remains of Oedipus and Theseus enjoyed an honor that is very difficult to distinguish from a religious cult, while Plutarch gives accounts of the translation of the bodies of Demetrius (Demetrius iii) and Phocion (Phocion xxxvii), which in many details anticipate Christian practice. The bones or ashes of Aesculapius at Epidaurus, and of Perdiccas I at Macedon, were treated with the deepest veneration, as were those of the Persian Zoroaster, according to the Chronicon Paschale (Dindorf, 67). However; there is no tradition in Zoroastrianism, nor its scriptures, to support this postulation.

In Buddhism, relics of the Buddha and various saints were (and still are) venerated. Following the Buddha's death, his bones and teeth were divided for the purpose of being used as relics in order to illustrate his teaching of impermanence (anitya). These relics were so valued that they caused armed conflict between factions for possession of them. Afterward, these relics were taken throughout Asia with the gradual spread of Buddhism.

Many Buddhist relics (especially bones and teeth) are kept in stupas (buildings created specifically for the relics). Many Buddhist temples have stupas and the placement of relics in a stupa often became the initial structure around which the whole temple would be based. Today, many stupas also hold the ashes or ringsel of prominent/respected Buddhists who were cremated. Some relics believed to be original relics of Buddha still survive including the much revered Sacred Relic of the tooth of the Buddha in Sri Lanka.

The Buddha's relics serve to inspire people that enlightenment is possible, and also to promote good virtue. The supposed footprint of the prophet Muhammad, found in a mausoleum in Istanbul.

Although certain sects of Islam strongly discourage (or outwardly prohibit) the veneration of relics, a very large collection of Muslim relics is preserved in the Sacred Trusts, located in Istanbul, which contains more than 600 treasured pieces in the Topkapi Palace Museum. Muslims believe that these relics include the sword and standard of Muhammad, a hair from his beard, and the staff of Moses. Most of the trusts can be seen in the museum, however, the most important of them can only be seen during the month of Ramadan. The Qur'an has allegedly been recited next to these relics uninterruptedly since they were brought to the Topkapi Palace.

Since the dawn of Christianity, relics have been an important part of Christian devotionalism. During the Middle Ages, the selling of relics became a lucrative business. The concept of physical proximity to the “holy” was considered extremely important.[1] A pilgrim's possession and veneration of a relic was seen as a means to become closer to God. Instead of having to travel hundreds of miles to become near to a venerated saint, a Christian could enjoy closeness with him/her through their relic at home.

Many tales of miracles and other marvels were attributed to relics beginning in the early centuries of the church; many of these became especially popular during the Middle Ages. These tales are collected in books of hagiography such as the Golden Legend or the works of Caesar of Heisterbach. These miracle tales made relics much sought after during the Middle Ages.

One of the earliest sources cited to support the efficacy of relics is found in 2 Kings 13:20-21:

"Elisha died and was buried. Now Moabite raiders used to enter the country every spring. 21 Once while some Israelites were burying a man, suddenly they saw a band of raiders; so they threw the man's body into Elisha's tomb. When the body touched Elisha's bones, the man came to life and stood up on his feet. (NIV)

Another often cited passage is Acts 19:11–12, which says that Paul's handkerchiefs were imbued by God with healing power.

There are also many relics attributed to Jesus, perhaps most famously the Shroud of Turin, which is claimed to be the burial shroud of Jesus, although this is disputed. Pieces of the True Cross were one of the most highly sought after such relics; many churches claimed to possess a piece of it, so many that John Calvin famously remarked that there were enough pieces of the True Cross from which to build a ship[2], although a study in 1870[3] found that put together the claimed relics weighed less than 1.7kg (0.04m³). The Image of Edessa was reputed to render that city impregnable.

This 10th-century image shows Abgarus of Edessa displaying the Image of Edessa. The oblong cloth shown here is unusual for depictions of the image, leading some to suggest that the artist was influenced by seeing the Shroud.

Ernest Brehaut has analyzed the Romano-Christian concepts that gave relics such a powerful draw (see link). He distinguished Gregory's constant usage of "sanctus" and "virtus," the first with its familiar meaning of "sacred" or "holy," and the second

"the mystic potency emanating from the person or thing that is sacred. These words have in themselves no ethical meaning and no humane implications whatever. They are the keywords of a religious technique and their content is wholly supernatural. In a practical way the second word [virtus] is the more important. It describes the uncanny, mysterious power emanating from the supernatural and affecting the natural. The manifestation of this power may be thought of as a contact between the natural and the supernatural in which the former, being an inferior reality, of course yielded. These points of contact and yielding are the miracles we continually hear of. The quality of sacredness and the mystic potency belong to spirits, in varying degrees to the faithful, and to inanimate objects. They are possessed by spirits, acquired by the faithful, and transmitted to objects."[4]

Opposed to this holy "virtue" was also a false mystic potency that emanated from inhabiting demons who were conceived of as alien and hostile. Truly holy virtus would defeat it, but it could affect natural phenomena and effect its own kinds of miracles, deceitful and malignant ones. This "virtue" Gregory of Tours and other Christian writers associated with the devil, demons, soothsayers, magicians, pagans and pagan gods, and heretics. False virtus inhabited images of the pagan gods, the "idols" of our museums and archaeology, and destroying it accounts for some of the righteous rage with which mobs of Christians toppled sculptures, and smashed classical bas-reliefs (particularly the faces), as our museums attest.

When Saint Martin died, November 8, 397 C.E., at a village halfway between Tours and Poitiers, the inhabitants of these cities were well ready to fight for his body, which the people of Tours managed to secure by stealth. The story of the purloining of Saint Nicholas of Bari is another example. 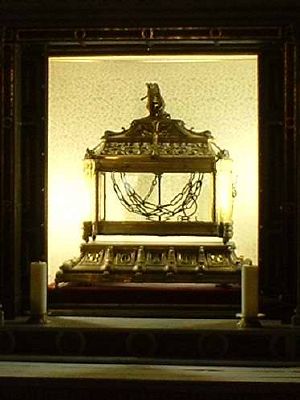 The Chains of Saint Peter, preserved in San Pietro in Vincoli, Rome, a second-class relic.

The Roman Catholic Church makes a distinction between veneration and worship of relics and icons. Saint Jerome declared, "We do not worship, we do not adore, for fear that we should bow down to the creature rather than to the creator, but we venerate the relics of the martyrs in order the better to adore him whose martyrs they are" (Ad Riparium, i, P.L., XXII, 907). To further ensure that this distinction is honored, the Vatican has developed three categories of relics, outlined below:

1.First-Class Relics: Items directly associated with the events of Christ's life (manger, cross, etc.), or the physical remains of a saint (a bone, a hair, a limb, etc.). Traditionally, a martyr's relics are often more prized than the relics of other saints. Also, some saints' relics are known for their extraordinary incorruptibility and so would have high regard. It is important to note that the parts of the saint that were significant to that saint's life are more prized relics. For instance, King St. Stephen of Hungary's right forearm is especially important because of his status as a ruler. A famous theologian's head may be his most important relic. (The head of Saint Thomas Aquinas was removed by the monks at the Cistercian abbey at Fossanova where he died). Logically, if a saint did a lot of travelling then the bones of his feet may be prized. Current Catholic teaching prohibits relics to be divided up into small, unrecognizable parts if they are to be used in liturgy (i.e., as in an altar; see the rubrics listed in Rite Of Dedication of a Church and an Altar).

3.Third-Class Relics: Anything that has touched a first or second class relic of a saint.

Given the importance of relics and their widespread commercial abuse in the Middle Ages, the sale of relics is strictly forbidden by the Roman Catholic Church, which decrees, "It is absolutely forbidden to sell sacred relics." (Code of Canon Law, §1190 §1).