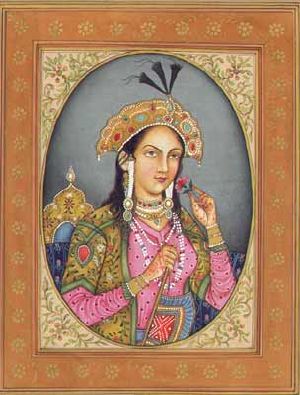 Mumtāz Mahal (April 1593 - June 17, 1631) (Persian, Urdu: ممتاز محل; pronunciation /mumtɑːz mɛhɛl/; meaning "beloved ornament of the palace") is the common nickname of Arjumand Banu Begum, an Indian-Persian Empress in the Mughal Dynasty. She was born in Agra, India. Her father was the Persian noble Abdul Hasan Asaf Khan, the brother of Nur Jehan (who subsequently became the wife of the emperor Jahangir). She was religiously a Shi'a Muslim. She was married at the age of 19, on May 10, 1612, to Prince Khurram, who would later ascend the Peacock Throne as Mughal emperor Shah Jahan I. She was his third wife, and became his favorite.

She died in Burhanpur in the Deccan (now in Madhya Pradesh) during the birth of their fourteenth child, a daughter named Gauhara Begum. Her body remained at Burhanpur for 23 years until the Taj was completed. Only then was her coffin shifted to Agra. Her body was then buried in the Taj Mahal in Agra, which is widely acknowledged to be one of the world's most beautiful buildings, a triumph of architectural skill and an immortal monument to love. If Mumtaz had not lived, if her husband had not cherished her memory as much as he did, the world would lack a jewel in the crown of human artistic and creative achievement. Millions of visitors to this sublime memorial are inspired to imagine that if men and women could produce such an exquisite, beautiful witness to love, they might also have the necessary creativity to make the world a place where only love and harmony exist between people, banishing hatred and hostility from the human space. 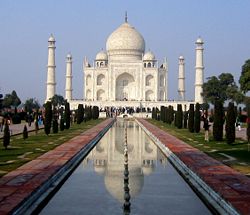 In 1607 C.E. (1016 AH), Prince Khurrum was betrothed to Arjumand Banu Begum, who was just 14 years old at the time. She would become the unquestioned love of his life. They would however, have to wait five years before they were married in 1612 C.E. (1021 AH), on a date selected by the court astrologers as most conducive to ensuring a happy marriage. After their wedding celebrations, Khurram "finding her in appearance and character elect among all the women of the time," gave her the title 'Mumtaz Mahal' Begum (Chosen One of the Palace) (18 AH).[1] The intervening years had seen Khurrum take two other wives. By all accounts, however, Khurram was so taken with Mumtaz, that he showed little interest in exercising his polygamous rights with the two earlier wives, other than dutifully siring a child with each. According to the official court chronicler, Qazwini, the relationship with his other wives "had nothing more than the status of marriage. The intimacy, deep affection, attention, and favor which His Majesty had for the Cradle of Excellence (Mumtaz) exceeded by a thousand times what he felt for any other."[1][2][3]

Mumtaz Mahal had a very deep and loving marriage with Shah Jahan. Even during her lifetime, poets would extol her beauty, gracefulness and compassion. Mumtaz Mahal was Shah Jahan's trusted companion, travelling with him all over the Mughal Empire. He trusted her so far that he even gave her his imperial seal, the Muhr Uzah. Mumtaz was portrayed as the perfect wife with no aspirations to political power in contrast to Nur Jehan, the wife of Jahangir who had wielded considerable influence in the previous reign.[4] She was a great influence on him, apparently often intervening on behalf of the poor and destitute. But she also enjoyed watching elephant and combat fights performed for the court. It was quite common for women of noble birth to commission architecture in the Mughal Empire. Mumtaz devoted some time to a riverside garden in Agra.

Mumtaz died in Burhanpur in 1631 C.E. (1040 AH), while giving birth to their fourteenth child. She had been accompanying her husband whilst he was fighting a campaign in the Deccan Plateau. Her body was temporarily buried at Burhanpur in a walled pleasure garden known as Zainabad originally constructed by Shah Jahan's uncle Daniyal on the bank of the Tapti River.[5] Rumor has it that on her deathbed, her last wish to the emperor was for a symbol or a monument to their love. She also asked her husband not to marry anyone. Inconsolable, the emperor promised immediately. The contemporary court chroniclers paid an unusual amount of attention to Mumtaz Mahal's death and Shah Jahan's grief at her demise. In the immediate aftermath of his bereavement, the emperor was reportedly inconsolable.[6] Apparently after her death, Shah Jahan went into secluded mourning for a year. When he appeared again, his hair had turned white, his back was bent, and his face worn. Jahan's eldest daughter, the devoted Jahanara Begum, gradually brought him out of grief and took the place of Mumtaz at court.

Her personal fortune valued at 10,000,000 rupees was divided by Shah Jahan between Jahanara Begum, who received half and the rest of her surviving children.[7] Burhanpur was never intended by her husband as his wife's final resting spot. As a result her body was disinterred in December 1631 and transported in a golden casket escorted by her son Shah Shuja and the head lady in waiting of the deceased Empress back to Agra.[8] There it was interred in a small building on the banks of the Yumma River. Shah Jahan stayed behind in Burhanpur to conclude the military campaign that had originally bought him to the region. While there he began planning the design and construction of a suitable mausoleum and funerary garden in Agra for his wife, a task that would take more than 22 years to complete, the Taj Mahal.

Today, the Taj Mahal stands as the ultimate monument to love, and an homage to her beauty and life. The Taj is a celebration of love, of the marital bond; it also celebrates marriage and love as gifts from God. Quranic calligraphy is omnipresent; the gardens represent paradise. Mahal inspired what has been described as "simply the most exquisite building in the world."[9] Few women and few men have inspired as magnificent memorial. Through the Taj, Mahal's legacy lives on. Visitors to the tomb are uplifted spiritually by the experience of viewing the sublime, and dare to imagine that if love could produce what they perceive to be as a piece of heaven on earth, perhaps humanity can transcend other limitations too, and create a just, harmonious and peaceful world. The tomb has a mosque on one side and a guest house on the other.

Retrieved from https://www.newworldencyclopedia.org/p/index.php?title=Mumtaz_Mahal&oldid=1086810
Categories:
Hidden category:
This page was last edited on 10 November 2022, at 18:21.
Content is available under Creative Commons Attribution/Share-Alike License; additional terms may apply. See Terms of Use for details.