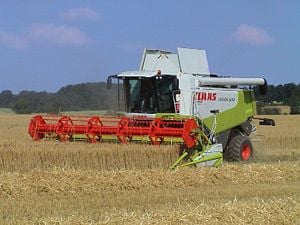 Agricultural technology refers to technology for the production of machines used on a farm to help with farming. Agricultural machines have been designed for practically every stage of the agricultural process. They include machines for tilling the soil, planting seeds, irrigating the land, cultivating crops, protecting them from pests and weeds, harvesting, threshing grain, livestock feeding, and sorting and packaging the products. People who are trained to design agricultural machinery, equipment, and structures are known as agricultural engineers.

Agricultural technology is among the most revolutionary and impactful areas of modern technology, driven by the fundamental need for food and for feeding an ever-growing population. It has opened an era in which powered machinery does the work formerly performed by people and animals (such as oxen and horses). These machines have massively increased farm output and dramatically changed the way people are employed and produce food worldwide. A well-known example of agricultural machinery is the tractor. Currently, mechanized agriculture also involves the use of airplanes and helicopters.

The first people to turn from the hunting and gathering lifestyle to farming probably relied on their bare hands, perhaps aided by sticks and stones. Once tools such as knives, scythes, and plows were developed, they dominated agriculture for thousands of years. During this time, most people worked in agriculture, because each family could barely raise enough food for themselves with the limited technology of the day.

Did you know?
The Industrial Revolution led to advances in agricultural technology that greatly increased food production allowing large numbers of people to pursue other types of work

With the coming of the Industrial Revolution and the development of more complicated machines, farming methods took a great leap forward. Instead of harvesting grain by hand with a sharp blade, wheeled machines cut a continuous swath. Instead of threshing the grain by beating it with sticks, threshing machines separated the seeds from the heads and stalks.

These machines required a lot of power, which was originally supplied by horses or other domesticated animals. With the invention of steam power came the steam-powered tractor, a multipurpose, mobile energy source that was the ground-crawling cousin of the steam locomotive. Agricultural steam engines took over the heavy pulling work of horses. They were also equipped with a pulley that could power stationary machines via the use of a long belt. The steam-powered behemoths could provide a tremendous amount of power, because of both their size and their low gear ratios.

The next generation of tractors was powered by gasoline (and later) diesel engines. These engines also contributed to the development of the self-propelled, combined harvester and thresher—or combine, for short. Instead of cutting the grain stalks and transporting them to a stationary threshing machine, these combines could cut, thresh, and separate the grain while moving continuously through the field.

Combines might have taken the harvesting job away from tractors, but tractors still do the majority of work on a modern farm. They are used to pull implements that till the ground, plant seed, or perform a number of other tasks.

Tillage implements prepare the soil for planting by loosening the soil and killing weeds or competing plants. The best-known is the plow, the ancient implement that was upgraded in 1838 by a man named John Deere. Plows are actually used less frequently in the United States today, with offset disks used instead to turn over the soil and chisels used to gain the depth needed to retain moisture.

The most common type of seeder, called a planter, spaces seeds out equally in long rows that are usually two to three feet apart. Some crops are planted by drills, which put out much more seed in rows less than a foot apart, blanketing the field with crops. Transplanters fully or partially automate the task of transplanting seedlings to the field. With the widespread use of plastic mulch, plastic mulch layers, transplanters, and seeders lay down long rows of plastic and plant through them automatically.

After planting, other implements can be used to remove weeds from between rows, or to spread fertilizer and pesticides. Hay balers can be used to tightly package grass or alfalfa into a storable form for the winter months.

Modern irrigation also relies on a great deal of machinery. A variety of engines, pumps and other specialized gear is used to provide water quickly and in high volumes to large areas of land. Similar types of equipment can be used to deliver fertilizers and pesticides.

Besides the tractor, a variety of vehicles have been adapted for use in various aspects of farming, including trucks, airplanes, and helicopters, for everything from transporting crops and making equipment mobile to aerial spraying and livestock herd management.

New technology and the future

The basic technology of agricultural machines has changed little through the last century. Though modern harvesters and planters may do a better job than their predecessors, the combine of today (costing about US$250,000) cuts, threshes, and separates grain in essentially the same way earlier versions had done. However, technology is changing the way that humans operate the machines, as computer monitoring systems, GPS locators, and self-steer programs allow the most advanced tractors and implements to be more precise and less wasteful in the use of fuel, seed, or fertilizer. In the foreseeable future, some agricultural machines may be made capable of driving themselves, using GPS maps and electronic sensors. Even more esoteric are the new areas of nanotechnology and genetic engineering, where submicroscopic devices and biological processes, respectively, may be used to perform agricultural tasks in unusual new ways.

Agriculture may be one of the oldest professions, but with the development and use of agricultural machinery, there has been a dramatic drop in the number of people who can be described as "farmers." Instead of every person having to work to provide food for themselves, less than two percent of the United States population today works in agriculture, yet that two percent provides considerably more food than the other 98 percent can eat. It is estimated that at the turn of the twentieth century, one farmer in the United States could feed 25 people, whereas today, that ratio is 1:130. (In a modern grain farm, a single farmer can produce cereal to feed over a thousand people.) With continuing advances in agricultural machinery, the role of the farmer will become increasingly specialized.

Agricultural engineers work in the context of agricultural production and processing and the management of natural resources. Their specialties include power systems and machinery design; structures and environmental science; and food and bioprocess engineering. They perform tasks such as planning, supervising, and managing the building of dairy effluent schemes, irrigation, drainage, flood and water control systems. They develop ways to conserve soil and water and to improve the processing of agricultural products. In addition, they may perform environmental impact assessments and interpret research results. 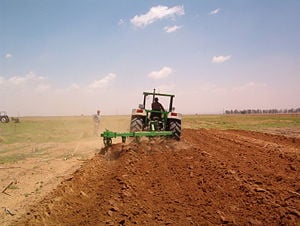 A plow in action in South Africa. Notice the soil being turned over. 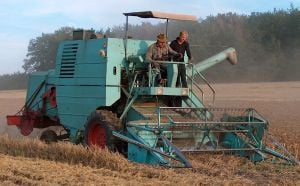 A round baler in action.