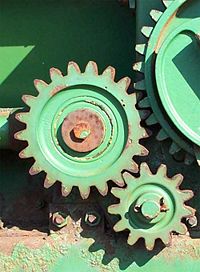 Gear ratio is the ratio between the number of teeth on two gears that are meshed together, or two sprockets connected with a common roller chain, or the circumferences of two pulleys connected with a drive belt.

A sprocket and roller chain.

This means that for every one revolution of the pinion, the gear has made 1/1.62, or 0.62, revolutions. In practical terms, the gear turns more slowly.

Since the intermediate (idler) gear contacts directly both the smaller and the larger gear it can be removed from the calculation, also giving a ratio of 42/13 = 3.23.

Since the diameter is equal to twice the radius;

Belts can have teeth in them also and be coupled to gear-like pulleys. Special gears called sprockets can be coupled together with chains, as on bicycles and some motorcycles. Again, exact accounting of teeth and revolutions can be applied with these machines. 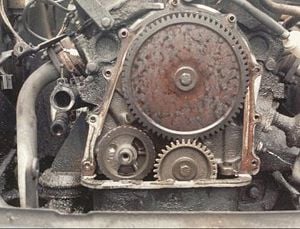 A belt with teeth, called the timing belt, is used in some internal combustion engines to exactly synchronize the movement of the camshaft with that of the crankshaft, so that the valves open and close at the top of each cylinder at exactly the right time relative to the movement of each cylinder. From the time the car is driven off the lot, to the time the belt needs replacing thousands of kilometers later, it synchronizes the two shafts exactly. A chain, called a timing chain, is used on some automobiles for this purpose, while in others, the camshaft and crankshaft are coupled directly together through meshed gears. But whichever form of drive is employed, on four-stroke engines the crankshaft/camshaft gear ratio is always 2:1, which means that for every two revolutions of the crankshaft the camshaft will rotate through one revolution.

Automobile drivetrains generally have two or more areas where gearing is used: one in the transmission, which contains a number of different sets of gearing that can be changed to allow a wide range of vehicle speeds, and another at the differential, which contains one additional set of gearing that provides further mechanical advantage at the wheels. These components might be separate and connected by a driveshaft, or they might be combined into one unit called a transaxle.

A 2004 Chevrolet Corvette C5 Z06 with a six-speed manual transmission has the following gear ratios in the transmission:

The car’s tires can almost be thought of as a third type of gearing. The example Corvette Z06 is equipped with 233/45-14 tires, which have a circumference of 82.1 inches. This means that for every complete revolution of the wheel, the car travels 82.1 inches. If the Corvette had larger tires, it would travel farther with each revolution of the wheel, which would be like a higher gear. If the car had smaller tires, it would be like a lower gear.

With the gear ratios of the transmission and differential, and the size of the tires, it becomes possible to calculate the speed of the car for a particular gear at a particular engine RPM.

For example, it is possible to determine the distance the car will travel for one revolution of the engine by dividing the circumference of the tire by the combined gear ratio of the transmission and differential.

Close-ratio transmissions are generally offered in sports cars, in which the engine is tuned for maximum power in a narrow range of operating speeds and the driver can be expected to enjoy shifting often to keep the engine in its power band.

Note that in a sequence of gears chained together, the ratio depends only on the number of teeth on the first and last gear. The intermediate gears, regardless of their size, do not alter the overall gear ratio of the chain. But, of course, the addition of each intermediate gear reverses the direction of rotation of the final gear.

An intermediate gear which does not drive a shaft to perform any work is called an idler gear. Sometimes, a single idler gear is used to reverse the direction, in which case it may be referred to as a reverse idler. For instance, the typical automobile manual transmission engages reverse gear by means of inserting a reverse idler between two gears.

Idler gears can also transmit rotation among distant shafts in situations where it would be impractical to simply make the distant gears larger to bring them together. Not only do larger gears occupy more space, but the mass and rotational inertia (moment of inertia) of a gear is quadratic in the length of its radius. Instead of idler gears, of course, a toothed belt or chain can be used to transmit torque over distance.