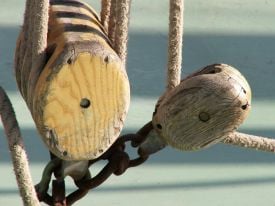 Pulleys on a ship. In this context, pulleys are usually known as blocks.

A pulley is a wheel with a groove along its edge for holding a rope or cable. It is a simple machine that helps change the direction and point of application of a pulling force. Pulleys are usually used in sets designed to reduce the amount of force needed to lift a load. The magnitude of the force is reduced, but it must act through a longer distance. Consequently, the amount of work necessary for the load to reach a particular height is the same as the amount of work needed without the pulleys.

Pulleys can be found in many different applications around us. Not only are they used for the obvious lifting of objects, such as by cranes, but they are also used in modern automobiles and airplanes. Pulleys are also essential for most machines in some form or other.

As is the case with all the simple machines, the origin of the pulley is unknown. When early peoples lifted heavy objects by throwing vines or other crude ropes over tree limbs, they used the idea of a single fixed pulley to change the direction of a force. But since there was no wheel to turn, this use resulted in considerable friction.

The earliest evidence of pulleys dates back to Ancient Egypt in the Twelfth Dynasty (1991-1802 B.C.E.), although these were probably not used to gain mechanical advantage but rather to change the direction of the pull.[1] There is also evidence of their use in Mesopotamia in the early second millennium B.C.E.[2]

It is not recorded when or by whom the pulley was first developed. It is believed however that Archimedes developed the first documented block and tackle pulley system, as recorded by Plutarch. Plutarch reported that Archimedes moved an entire warship, laden with men, using compound pulleys and his own strength. 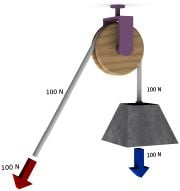 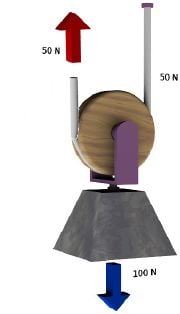 Pulleys are able to change the direction of the force.

The simplest theory of operation for a pulley system assumes that the pulleys and lines are weightless, and that there is no energy loss due to friction. It is also assumed that the lines do not stretch. With this assumption, it follows that, in equilibrium, the total force on the pulley must be zero. This means that the force on the axle of the pulley is shared equally by the two lines looping through the pulley. The situation is schematically illustrated in Diagram 1. For the case where the lines are not parallel, the tensions in each line are still equal, but now the vector sum of all forces is zero.

It is important to note that the amount of work done in an ideal pulley is always the same. The work is given by the effort times the distance moved. The pulley simply allows trading effort for distance.

In Diagram 2, a single movable pulley allows a unit weight to be lifted with only half the force needed to lift the weight without assistance. The total force needed is divided between the lifting force (red arrow) and the "ceiling" which is some immovable object (such as the earth). In this simple system, the lifting force is directed in the same direction as the movement of the weight. The advantage of this system is two. Although the force needed to lift the unit weight is only half of the unit weight, we will need to draw a length of rope that is twice the distance that the weight is lifted, so that the total amount of work done (force x distance) remains the same.

A second pulley may be added as in Diagram 2a, which simply serves to redirect the lifting force downward, it does not change the advantage of the system.

The addition of a fixed pulley to the single pulley system can yield an increase of advantage. In Diagram 3, the addition of a fixed pulley yields a lifting advantage of three. The tension in each line is one-third the unit weight, and the force on the axles of each pulley is two-thirds of a unit weight. As in the case of Diagram 2a, another pulley may be added to reverse the direction of the lifting force, but with no increase in advantage. This situation is shown in Diagram 3a.

This process can be continued indefinitely for ideal pulleys with each additional pulley yielding a unit increase in advantage. For real pulleys, however, friction between the rope and pulleys will increase as more pulleys are added, to the point that no advantage is possible. It puts a limit for the number of pulleys we can use in practice. The above pulley systems are known collectively as block and tackle pulley systems. In diagram 4a, a block and tackle system with advantage four is shown. A practical implementation in which the connection to the ceiling is combined and the fixed and movable pulleys are encased in single housings is shown in Figure 4b.

Pulleys have been used for lifting for thousands of years. The most prevalent and oldest example are their uses on ships and boats. The block and tackle have been a key tool for raising sails and cargo. Another major use for pulleys is with cranes.

Pulleys continue to be used in modern times with various machines and systems. Even in the space age, pulleys play an important role in the construction and operations of spacecraft and aircraft. It is with a pulley system that rudders for an aircraft are controlled. In fact, pulleys are commonly used in everyday life, from vehicles to moving equipment.