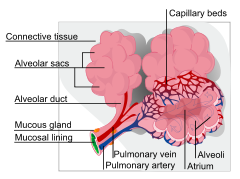 Alveolus (plural: alveoli), or pulmonary alveolus, informally known as air sac, is any of the innumerable minuscule, thin-walled, capillary-rich hollow cavities in the mammalian lung that serve as the primary sites of gas exchange between the atmosphere and the blood. There are hundreds of millions of such air sacs in the human lung, appearing together in clusters (alveolar sacs) connected to the bronchioles.

The alveoli are part of the remarkable harmony between the body and the environment, interfacing between the atmosphere and the circulatory system. The blood brings carbon dioxide from the rest of the body for release into the alveoli, and the oxygen in these spherical structures is taken up by the blood in the alveolar blood vessels to be transported to all the cells in the body.

The term alveolus also is used for anatomical structures connected to the trachea in some insects and for structures that are part of the bird and dinosaur respiratory system. However, these are different structures and not part of this article. 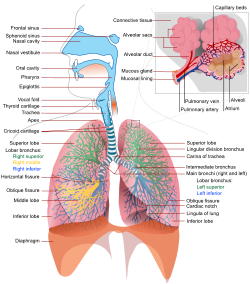 Respiratory system of a human

Lungs are the primary respiratory organs in air-breathing vertebrates, whereby oxygen from the atmosphere is transferred into the bloodstream and carbon dioxide from the bloodstream is excreted into the atmosphere. In the mammalian lung, air enters the roots of the lungs through the bronchi, having reached the bronchi via the trachea. The bronchi further subdivide into finer and finer pathways of branching airways, first giving rise to the smaller bronchioles, and then to the terminal bronchioles, and finally to the alveolar sacs. The alveolar sacs are made up of millions of tiny, exceptionally thin-walled air sacs called alveoli. These pulmonary alveoli are spherical outcroppings of the respiratory bronchioles and are the primary sites of gas exchange with the blood.

The alveolar sacs, which connect to the bronchioles via alveolar ducts, are in the form of clusters of alveoli, with each of the alveoli resembling individual grapes within a bunch. The term comes from the Latin alveolus, which means "little cavity." The walls of the alveoli are but one-cell thick and each alveolus is tightly wrapped in blood vessels (capillaries).

The alveoli are found in the respiratory zone of the lungs. It is here in the alveoli that gas exchange occurs. Deoxygenated blood from the heart is pumped through the pulmonary artery to the lungs, where oxygen diffuses into blood and is exchanged for carbon dioxide in the hemoglobin of the erythrocytes. The oxygen-rich blood returns to the heart via the pulmonary veins to be pumped back into systemic circulation.

Alveoli are particular to mammalian lungs. Different structures are involved in gas exchange in other vertebrates (Daniels and Orgeig 2003). 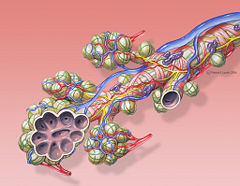 The human lung contains about 480 million alveoli (Weibel 2008), representing a total surface area of about 70-90 square meters (m2). Each alveolus is wrapped in a fine mesh of capillaries covering about 70 percent of its area. An adult alveolus has an average diameter of 0.2-0.3 millimeters, with an increase in diameter during inhalation.

The alveoli consist of an epithelial layer and extracellular matrix surrounded by capillaries. In some alveolar walls there are pores between alveoli called pores of Kohn.

There are three major alveolar cell types in the alveolar wall (pneumocytes):

The alveoli have an innate tendency to collapse (atelectasis) because of their spherical shape, small size, and surface tension due to water vapor. Phospholipids, which are called surfactants, and pores help to equalize pressures and prevent collapse.

The following are some diseases associated with the alveoli.

Retrieved from https://www.newworldencyclopedia.org/p/index.php?title=Pulmonary_alveolus&oldid=1072046
Categories:
Hidden category:
This page was last edited on 2 July 2022, at 14:17.
Content is available under Creative Commons Attribution/Share-Alike License; additional terms may apply. See Terms of Use for details.