A spring scale measures the weight of an object, corresponding to the force of gravity exerted on the object.

In physics, force is defined as the rate of change of momentum of an object. This definition was given by Isaac Newton in the seventeenth century. In simpler terms, force may be thought of as an influence that may cause an object to accelerate. Force and mass are fundamental to Newtonian physics.

In everyday life, a force may be experienced in various ways, such as a lift, a push, or a pull. A familiar example of force is the weight of an object, which is defined as the amount of gravitational force exerted on the object. In addition, a force (or combination of forces) may cause an object to rotate or become deformed. Rotational effects and deformation are determined respectively by the torques and stresses that the forces create.

In the twentieth century, it was found that all known forces could be reduced to four fundamental forces: the strong force, weak force, electromagnetic force, and gravity. However, contemporary physics such as quantum mechanics and general relativity no longer regard the concept of force as fundamental. In quantum mechanics, force is seen as derivative of the interactions between particles. In general relativity, gravitational force is a trajectory along curved space-time.

Aristotle and his followers believed that it was the natural state of objects on Earth to be motionless and that they tended toward that state if left alone. But this theory, although based on the everyday experience of how objects move, was first shown to be unsatisfactory by Galileo as a result of his work on gravity. Galileo constructed an experiment in which stones and cannonballs were both rolled down an incline to disprove the Aristotelian theory of motion early in the seventeenth century. He showed that the bodies were accelerated by gravity to an extent that was independent of their mass and argued that objects retain their velocity unless acted on by a force—usually friction.

Isaac Newton is recognized as having given the mathematical definition of force as the rate of change (time derivative) of momentum. In 1784, Charles Coulomb discovered the inverse square law of interaction between electric charges using a torsion balance.

Force is defined as the rate of change of momentum with time:

is the mass and

is the velocity) is called the momentum. This is the only definition of force known in physics.

Momentum is a vector quantity—that is, it has both a magnitude and direction. Therefore force is also a vector quantity. The actual acceleration of the body is determined by the vector sum of all forces acting on it (known as net force or resultant force).

If the mass m is constant in time, then Newton's second law can be derived from this definition:

(the rate of change of velocity) is the acceleration.

This is the form Newton's second law is usually taught in introductory physics courses.

All known forces of nature are defined via the above Newtonian definition of force. For example, weight (force of gravity) is defined as mass times acceleration of free fall: w = mg

It is not always the case that m, the mass of an object, is independent of time, t. For example, the mass of a rocket decreases as its fuel is burned. Under such circumstances, the above equation

is obviously incorrect, and the original definition of force: 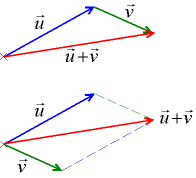 Because momentum is a vector, then force is also a vector—it has magnitude and direction. Vectors (and thus forces) are added together by their components. When two forces act on an object, the resulting force, often called the resultant, is the vector sum of the original forces. This is called the principle of superposition. The magnitude of the resultant varies from the difference of the magnitudes of the two forces to their sum, depending on the angle between their lines of action. As with all vector addition, this results in a parallelogram rule: the addition of two vectors represented by sides of a parallelogram gives an equivalent resultant vector, which is equal in magnitude and direction to the transversal of the parallelogram. If the two forces are equal in magnitude but opposite in direction, then the resultant is zero. This condition is called static equilibrium, with the result that the object remains at its constant velocity (which could be zero).

Although there are apparently many types of forces in the universe, they are all based on four fundamental forces, mentioned above. The strong and weak forces only act at very short distances and are responsible for holding certain nucleons and compound nuclei together. The electromagnetic force acts between electric charges, and the gravitational force acts between masses.

All other forces are based on these four. For example, friction is a manifestation of the electromagnetic force (acting between the atoms of two surfaces) and the Pauli exclusion principle, which does not allow atoms to pass through each other. The forces in springs modeled by Hooke's law are also the result of electromagnetic forces and the exclusion principle acting together to return the object to its equilibrium position. Centrifugal forces are acceleration forces (inertia forces) that arise simply from the acceleration of rotating frames of reference.

In the special theory of relativity, mass and energy are equivalent (as can be seen by calculating the work required to accelerate a body). When an object's velocity increases, so does its energy and hence its mass equivalent (inertia). It thus requires a greater force to accelerate it the same amount than it did at a lower velocity. The definition

remains valid, but the momentum must be redefined (in order to be conserved) as:

is the velocity and

Note that this definition is consistent with the classic definition of momentum (mv) at low speeds.

Also, according to the theory of relativity, for objects moving at extremely high speeds, a constant force produces not a constant acceleration but an ever-decreasing acceleration as the object approaches the speed of light.

The SI unit used to measure force is the newton (symbol N) where:

A newton is the amount of force required to accelerate a body with a mass of one kilogram at a rate of one meter per second squared.

A pound-force (lbf or lbf) is another common unit of force. One pound-force is the force equivalent to that exerted on a mass of one pound on the surface of Earth. When the standard g (an acceleration of 9.80665 m/s²) is used to define pounds force, the mass in pounds is numerically equal to the weight in pounds force. However, even at sea level on Earth, the actual acceleration of free fall is variable, over 0.53% more at the poles than at the equator.

Below are several conversion factors for measuring force in various units: