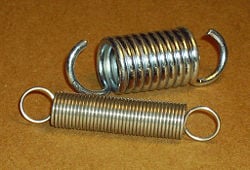 A spring is a flexible, elastic device used to store mechanical energy. When a force is applied to a spring, it expands or contracts to a certain extent, and when the force is released, the spring attempts to return to its earlier state.

Springs can be made of a variety of elastic materials, including fluids, but springs used in mechanical devices are generally made of metal. They also vary in shape; familiar shapes being helical, spiral, and flat.

Based on their behavior, springs are used to move objects, absorb vibrations, and control mechanical shock. For instance, they are useful in clocks, shock absorbers, motorized toys, pogo sticks, automobile engine valves, and door-closing mechanisms. Technically, a wooden bow is a form of spring.

Simple, non-coiled springs, such as the bow (used with an arrow), have been used through much of human history. In the Bronze Age, more sophisticated spring devices were used, as indicated by the spread of tweezers in many cultures. Ctesibius of Alexandria developed a method for making bronze with spring-like characteristics by producing an alloy of bronze with an increased proportion of tin, then hardening it by hammering after it was cast.

As noted above, various elastic materials can be used to make springs. Even fluids under pressure demonstrate spring-like properties. Most springs, however, are made of metal, particularly hardened steel. Small springs can be wound from pre-hardened stock, while larger ones are made from annealed steel and hardened after fabrication. Some non-ferrous metals are also used, including phosphor bronze for parts requiring corrosion resistance, and beryllium copper for springs carrying electrical current (because its electrical resistance is low). 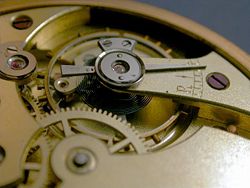 Springs are classified according their properties.

Depending on the load, they may be classified as:

In the case of tension/extension springs and compression springs, there is axial load. On the other hand, the torsional spring has torsional force.

Depending on the material of the spring, it can be classified as:

The most common types of spring are: 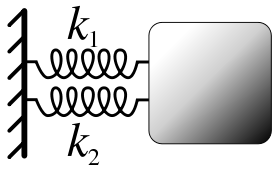 Two springs attached to a wall and a mass. In a situation like this, the two springs can be replaced by one with a spring constant of keq=k1+k2.

In classical physics, a spring can be thought of as a device that absorbs potential energy when it is extended or compressed. The extension or compression strains the bonds between the atoms of the elastic material.

If the spring undergoes only slight stretching or compression, it obeys Hooke's law of elasticity. This law was named after British physicist Robert Hooke, who discovered the principle in 1676.

In simple terms, Hooke's law states that the force with which a spring pushes back toward its equilibrium position is linearly proportional to the distance from its equilibrium length. More precisely, Hooke's law states that the extension of an elastic rod (its distended length minus its relaxed length) is linearly proportional to its tension, the force used to stretch it. Likewise, the contraction (negative extension) is proportional to the compression (negative tension).

This law is valid only approximately, and only when the deformation (extension or contraction) is small compared to the spring's overall length. For deformations beyond the elastic limit, atomic bonds get broken or rearranged, and a spring may snap, buckle, or become permanently deformed. Many materials have no clearly defined elastic limit, and Hooke's law cannot be meaningfully applied to these materials.

In mathematical terms, Hooke's law can be written as:

x is the distance through which the spring has been elongated or compressed,
F is the restoring force exerted by the spring, and
k is the spring constant or force constant of the spring.

Given that force (F) is equal to mass (m) times acceleration, a, the force equation can be written as: 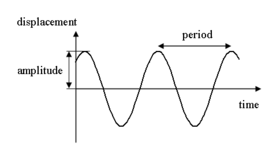 The displacement, x, as a function of time. The amount of time that passes between peaks is called the period.

Given that acceleration is the second time derivative of x, one can write:

Rearranging the results, one gets the following differential equation:

The solution of this equation is the sum of a sine and a cosine:

The graph of this function is displayed in the image on the right.

"Zero-length spring" is the standard term for a spring that exerts zero force when it has zero length. In practice, a spring with "negative" length (in which the coils press together when the spring is relaxed) is combined with an extra length of inelastic material.

This type of spring was developed in 1932 by Lucien LaCoste for use in a vertical seismograph. A spring with zero length can be attached to a mass on a hinged boom, such that the force on the mass is almost exactly balanced by the vertical component of the force from the spring, whatever the position of the boom. This creates a pendulum with a very long period. Long-period pendulums enable seismometers to sense the slowest waves from earthquakes. The LaCoste suspension with zero-length springs is also used in gravimeters because it is very sensitive to changes in gravity.

Springs for closing doors are often made to have roughly zero length so that they will exert force even when the door is almost closed, allowing the door to close firmly.