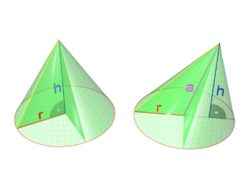 A right circular cone and an oblique cone.

The line joining the apex of the cone to the center of the base (suitably defined) is called the axis. In common usage and in elementary geometry, the base is a circle, and the axis is perpendicular to the plane of the base. Such a cone is called a right circular cone.

When a right circular conical surface is intersected by a plane, the curve produced at the intersection is called a conic section (or conic). Circles, ellipses, parabolas, and hyperbolas are all conic sections. The study of cones and conic sections is important not only for mathematics and physics but also for a variety of engineering applications.

The perimeter of the base is called the directrix, and each of the line segments between the directrix and apex is a generatrix of the lateral surface.

In general, the base of a cone may have any shape, and the apex may lie anywhere. However, it is often assumed that the base is bounded and has nonzero area, and that the apex lies outside the plane of the base.

If the axis of the cone is at right angles to the base then it is said to be a "right cone"; otherwise, it is an "oblique cone."

A cone with its apex cut off by a plane parallel to its base is called a truncated cone or frustum.

The aperture of a right circular cone is the maximum angle between two generatrix lines; if the generatrix makes and angle θ to the axis, the aperture is 2θ.

In mathematical usage, the word cone is also used for an infinite cone, which is the union of any set of half-lines that start at a common apex point. This type of cone does not have a bounding base and extends to infinity. A doubly infinite cone (or double cone) is the union of any set of straight lines that pass through a common apex point, and therefore extends symmetrically on both sides of the apex. Depending on the context, the word may also mean specifically a convex cone or a projective cone. The boundary of an infinite or doubly infinite cone is a conical surface. For infinite cones, the word axis usually refers to the axis of rotational symmetry (if any).

(the perpendicular distance from the base to the apex).

The center of mass of a conic solid is at 1/4 of the height on the axis.

For a circular cone with radius r and height h, the formula for volume becomes

For a right circular cone, the surface area

is the slant height.

The first term in the area formula,

, is the area of the base, while the second term,

, is the area of the lateral surface.

A right circular cone with height

, whose axis is the

coordinate axis and whose apex is the origin, is described parametrically as

In implicit form, the same solid is defined by the inequalities

More generally, a right circular cone with vertex at the origin, axis parallel to the vector

, is given by the implicit vector equation