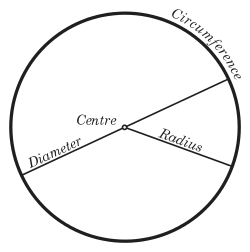 This article is about the shape and mathematical concept of circle. For other uses of the term, see Circle (disambiguation).

A circle is a simple closed curve that divides the plane into an interior and exterior. The interior of the circle is called a disk.

Mathematically, a circle can be understood in several other ways as well. For instance, it is a special case of an ellipse in which the two foci coincide (that is, they are the same point). Alternatively, a circle can be thought of as the conic section attained when a right circular cone is intersected with a plane perpendicular to the axis of the cone.

All circles have similar properties. Some of these are noted below. 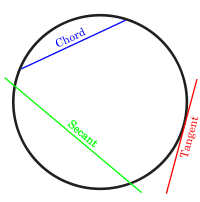 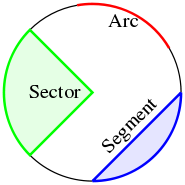 A line segment that connects one point of a circle to another is called a chord. The diameter is a chord that runs through the center of the circle. 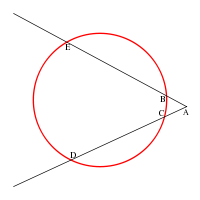 Equation of a circle

In an x-y coordinate system, the circle with center (a, b) and radius r is the set of all points (x, y) such that

If the circle is centered at the origin (0, 0), then this formula can be simplified to

and its tangent will be

are the coordinates of the common point.

When expressed in parametric equations, (x, y) can be written using the trigonometric functions sine and cosine as

where t is a parametric variable, understood as the angle the ray to (x, y) makes with the x-axis.

It can be proven that a conic section is a circle if and only if the point I(1,i,0) and J(1,-i,0) lie on the conic section. These points are called the circular points at infinity.

In polar coordinates the equation of a circle is

In the complex plane, a circle with a center at c and radius r has the equation

The slope of a circle at a point (x, y) can be expressed with the following formula, assuming the center is at the origin and (x, y) is on the circle:

More generally, the slope at a point (x, y) on the circle 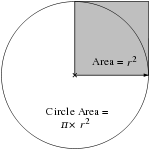 Area of the circle = π × area of the shaded square

that is, approximately 79 percent of the circumscribed square.

Given that the ratio circumference c to the Area A is

The r and the π can be canceled, leaving

The diameter of a circle is 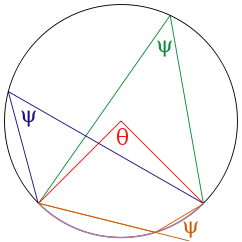 is exactly half of the corresponding central angle

(see Figure). Hence, all inscribed angles that subtend the same arc have the same value (cf. the blue and green angles

in the Figure). Angles inscribed on the arc are supplementary. In particular, every inscribed angle that subtends a diameter is a right angle.

An alternative definition of a circle

Apollonius' definition of a circle

Apollonius of Perga showed that a circle may also be defined as the set of points having a constant ratio of distances to two foci, A and B.

The proof is as follows. A line segment PC bisects the interior angle APB, since the segments are similar:

, the angle CPD is exactly

, i.e., a right angle. The set of points P that form a right angle with a given line segment CD form a circle, of which CD is the diameter. As a point of clarification, note that C and D are determined by A, B, and the desired ratio (i.e. A and B are not arbitrary points lying on an extension of the diameter of an existing circle).

Calculating the parameters of a circle 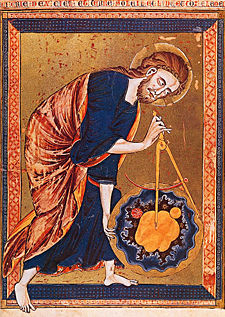 Early science, particularly geometry and astronomy/astrology, was connected to the divine for most medieval scholars. The compass in this thirteenth century manuscript is a symbol of God's act of Creation, as many believed that there was something intrinsically "divine" or "perfect" that could be found in circles

Given three non-collinear points lying on the circle

The radius of the circle is given by

The center of the circle is given by

, a point on the circle,

and a unit normal of the plane containing the circle,

, the parametric equation of the circle starting from the point

and proceeding counterclockwise is given by the following equation: