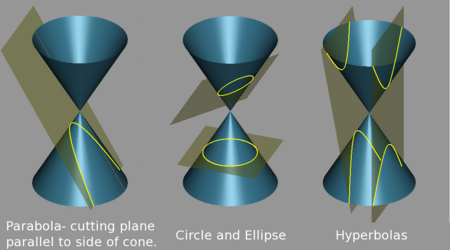 In mathematics, a conic section (or just conic) is a curve that can be formed by intersecting a cone (more precisely, a right circular conical surface) with a plane. The conic sections were named and studied as long ago as 200 B.C.E., when Apollonius of Perga undertook a systematic study of their properties.

Conic sections are observed in the paths taken by celestial bodies. When two massive objects interact according to Newton's law of universal gravitation, their orbits are conic sections if their common center of mass is considered to be at rest. If they are bound together, they will both trace out ellipses; if they are moving apart, they will both follow parabolas or hyperbolas. 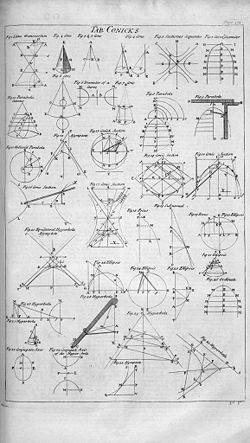 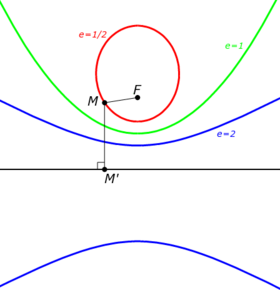 The four defining conditions above can be combined into one condition that depends on a fixed point F (the focus), a line L (the directrix) not containing F, and a nonnegative real number e (the eccentricity). The corresponding conic section consists of all points whose distance to F equals e times their distance to L. For 0 < e < 1 an ellipse is obtained; for e = 1, a parabola; and for e > 1, a hyperbola.

For an ellipse and a hyperbola, two focus-directrix combinations can be taken, each giving the same full ellipse or hyperbola. The distance from the center to the directrix is

In the case of a circle, the eccentricity e = 0, and one can imagine the directrix to be infinitely far removed from the center. However, the statement that the circle consists of all points whose distance is e times the distance to L is not useful, because it yields zero times infinity.

The eccentricity of a conic section is thus a measure of how far it deviates from being circular.

is to 1, the smaller is the semi-minor axis.

In the Cartesian coordinate system, the graph of a quadratic equation in two variables is always a conic section, and all conic sections arise in this way. The equation will be of the form

Note that A and B are just polynomial coefficients, not the lengths of semi-major/minor axis as defined in the previous sections.

Through change of coordinates these equations can be put in standard forms:

. Therefore its inverse function is exactly the same as its original function.

These standard forms can be written as parametric equations,

In homogeneous coordinates a conic section can be represented as:

Or in matrix notation

is called "the matrix of the conic section."

For example, the conic section

reduces to the union of two lines:

Similarly, a conic section sometimes reduces to a (single) line:

Semi-latus rectum in the case of an ellipse

The semi-latus rectum of a conic section, usually denoted l, is the distance from the single focus, or one of the two foci, to the conic section itself, measured along a line perpendicular to the major axis.

In polar coordinates, a conic section with one focus at the origin and, if any, the other on the x-axis, is given by the equation

Conic sections are important in astronomy. The orbits of two massive objects that interact according to Newton's law of universal gravitation are conic sections if their common center of mass is considered to be at rest. If they are bound together, they will both trace out ellipses; if they are moving apart, they will both follow parabolas or hyperbolas.

Conic sections are always "smooth;" more precisely, they contain no inflection points. This is important for many applications, such as aerodynamics, where a smooth surface is required to ensure laminar flow and prevent turbulence.

In projective geometry, the conic sections in the projective plane are equivalent to each other up to projective transformations.