Not to be confused with hyperbole. 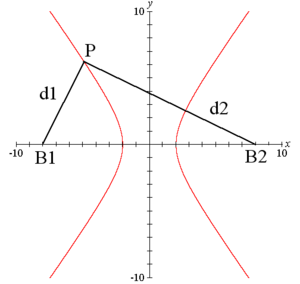 Graph of a hyperbola (red). The two foci are B1 and B2. As point P moves along an arm of the hyperbola, the difference between the distances d1 and d2 remains a constant.

In mathematics, a hyperbola (from the Greek word ὑπερβολή, literally meaning "overshooting" or "excess") is a geometric figure such that the difference between the distances from any point on the figure to two fixed points is a constant. The two fixed points are called foci (plural of focus). This figure consists of two disconnected curves called its arms or branches that separate the foci. The bend points of the arms of a hyperbola are called the vertices (plural of vertex).

A hyperbola is a type of conic section. Thus a second definition of a hyperbola is that it is the figure obtained by the intersection between a right circular conical surface and a plane that cuts through both halves of the cone.

A third definition is that a hyperbola is the locus of points for which the ratio of the distances to one focus and to a line (called the directrix) is a constant greater than one. This constant is the eccentricity of the hyperbola. 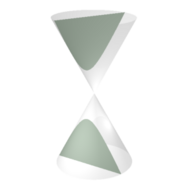 Hyperbola (shaded green) in terms of its conic section.

The point that lies halfway between the two foci is called the center of the hyperbola.

The minor axis is a straight line that runs through the center of the hyperbola and is perpendicular to the major axis.

If a point P moves along an arm of the hyperbola and the distances of that point from the two foci are called d1 and d2, the difference between d1 and d2 remains a constant. This constant is equal to two times a, where a is the semi-major axis of the hyperbola.

for an East-West opening hyperbola or

for a North-South opening hyperbola. Algebraically, a hyperbola is a curve in the Cartesian plane defined by an equation of the form

, where all of the coefficients are real, and where more than one solution, defining a pair of points (x, y) on the hyperbola, exists.

In both formulas, a is the semi-major axis (half the distance between the two arms of the hyperbola measured along the major axis), and b is the semi-minor axis.

If one calculates the distance from any point on the hyperbola to each focus, the absolute value of the difference of those two distances is always 2a.

The eccentricity is given by

The foci for an east-west opening hyperbola are given by

where c is given by

and for a north-south opening hyperbola are given by

For rectangular hyperbolas with the coordinate axes parallel to their asymptotes: 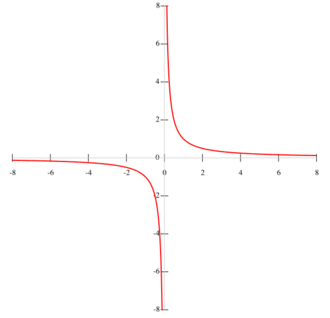 A graph of the rectangular hyperbola,

The simplest example of these are the hyperbolas

In all formulas the center is at the pole, and a is the semi-major axis and semi-minor axis.

In all formulas (h,k) is the center of the hyperbola, a is the semi-major axis, and b is the semi-minor axis.

Retrieved from https://www.newworldencyclopedia.org/p/index.php?title=Hyperbola&oldid=1009046
Categories:
Hidden category:
This page was last edited on 23 January 2018, at 15:35.
Content is available under Creative Commons Attribution/Share-Alike License; additional terms may apply. See Terms of Use for details.